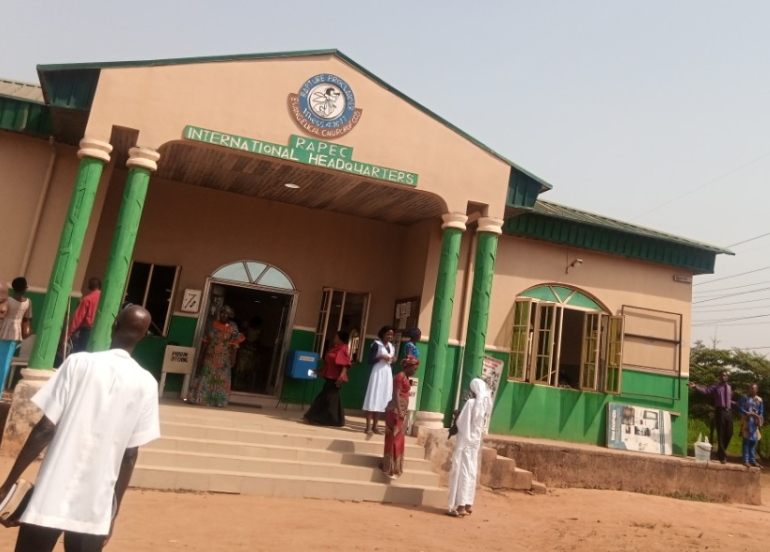 At 8:10am on Sunday, I arrived at the international headquarters of Rapture Proclaimer Evangelical Church of God (RAPEC) located at Adeyefa street, Iyana-Ipaja axis of Lagos state. Funmilayo Adebayo, its founder, earned the nickname ‘Mummy GO’ after becoming a viral sensation over her controversial and jarring sermons.

From a little distance away from the church’s building, I stood, trying to establish if it was indeed Mummy GO’s church.

“That’s her church, I have not been there before but I have seen her move past here on several occasions,” a female resident of the area whom I approached for clarification said.

With my doubts finally cleared, I continued with the journey to Mummy GO’s church. Neat, organised and with ample space for parking, there was a sense of order within the church’s premises.

Close to the entrance of the building, prayer warriors were seen firmly holding their hands as they fervently prayed for the success of the day’s service.

The atmosphere was characterised by a palpable fear of the unknown due to the controversies trailing the general overseer’s sermons. Some members were seen standing in groups, discussing in hushed tones as they watched those arriving for service.

“Everyone wants to see Mummy GO now,” a member was heard saying.

From the various inscriptions at the church’s entrance, one could easily sense that in Mummy GO’s church, only those willing to obey laid down rules would be allowed access into the building.

“Switch off your phone before entering,” one of the notes read. A male usher, who led me to where I am to sit, also re-echoed the message when he spotted me.

“Please switch off your phone. We do that for security purposes,” he instructed politely to which I obliged.

Non-usage of mobile devices is just one of the many rules for accessing Mummy GO’s church. Another banner at the building’s entrance detailed other items that are prohibited from entering the “sanctuary of God”.

They include trousers, jewelry of any kind, hair extensions for women, revealing clothes, and crowns.

“What we have on the list is also in the Bible if you are familiar with it,” Seun, a female evangelist with the ministry, said.

If anything, Mummy GO’s ministry is a sharp contrast to many contemporary pentecostal churches. The mode of dressing of the church members is similar. None of the females — both old and young — wore earrings while their attires stretched from their necks to their toes. The men were also clad in traditional and corporate outfits.

The topic, titled ‘Devil like Jesus’, was taken from 2 Corinthians 11:14 which reads “and no marvel; for Satan himself is transformed into an angel of light”.

During her teaching, the coordinator cited several practices commonplace in contemporary churches which, according to her, are not biblical.

“Everything is polluted now,” she said. “Today, there are people that paint their lips, wear trousers, weave-on and attachments and claim they’re speaking in tongue.”

Unlike some pentecostal churches that dwell more on prosperity gospel, RAPEC focuses on holiness and biblical standards considered as acceptable requirements to make heaven.

“Some Christians will go to hell from the church,” another official coordinating the Sunday school session said.

From the Sunday school, to praise and worship, and prayer to other sessions, there was a mention of hell in almost every message passed during the day’s service.

At a makeshift bookshelf stationed outside the church, the message is the same. Most of the books written by Mummy GO addressed issues bordering on antichrists and events of the end time.

It was an interesting experience worshipping at Mummy GO’s church. The organisation, coordination of the service, and topic of sermons left one with a lot to ponder.

But like many others who visited the church, the evangelist’s absence was a sore letdown, particularly in the wake of her allegation that most of the viral videos of her sermons were doctored.

I left the church still yearning for the same thing that took me there in the first place: to watch the cleric in her element, passionately delivering her now-iconic hell-themed sermons that have become the subject of memes, GIFs, and stickers on social media.

Culled from The Cable

Tokyo Olympics: Facts About The Puma Contract and Its Aftermath By Chibuike Anyanwu