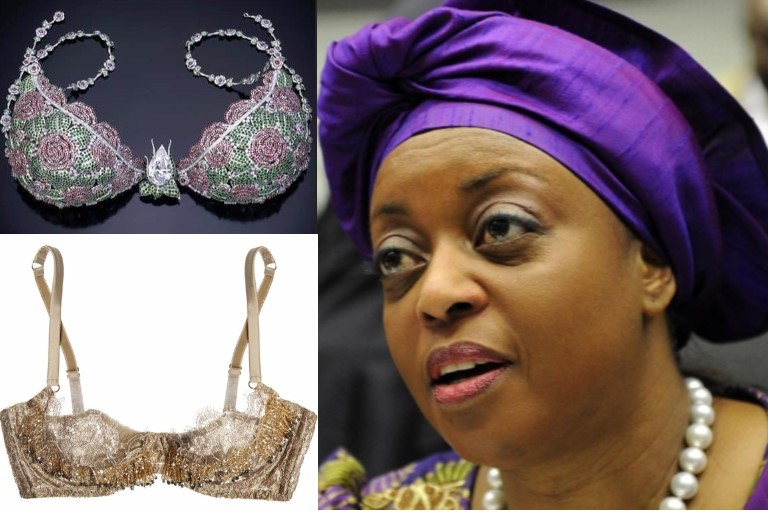 Diezani and some of the obscene proceeds of her loot

Well, Diezani is not willing to sit this one out and is telling her own side of the story. And it’s not just illuminating and refreshing, but would invoke, especially among those with conscience, sympathy/empathy for her, and gratitude, yes, gratitude to her for what she went through all for the sake of public service.

If there is a prize for the most misunderstood, under appreciated, and most vilified public servant Nigeria has ever had in recent history, the former petroleum minister, princess Diezani, would win the prize hands down.

Hardly does a month go by that the public is not treated to one story about her or another. The stories are all the same: about her greed, primitive accumulation, and insatiable appetite for luxurious lifestyle. In this era of cancel culture, Diezani vilification has almost become a national obsession.

People believe, actually, are eager to believe any story about her no matter how ludicrous, as long as it is negative. The other day there was a report that she stole $500B, yes, that’s half a trillionn dollars, and people ate it up, believed it. No one bothered to ask, wait, what was the entire budget for the years she was in office. No, nobody want the facts to get in their way of yet another delicious Diezani dessert.

The public reaction to the recent story, the flavor of the month in the Diezani-Cancel National Fixation, making the rounds about her $12.5M diamond encrusted bras put up for sale by the FGN is no different. No one, it appears, is interested in hearing her own side of the story.

Even people who waited to hear Abba Kyari’s response to the FBI/Hushpuppi allegations before reaching any decision are unwilling to extend the same basic wait for the other side to respond before rushing to decision about Diezani this, Diezani that.

Well, Diezani is not willing to sit this one out and is telling her own side of the story. And it’s not just illuminating and refreshing, but would invoke, especially among those with conscience, sympathy/empathy for her, and gratitude, yes, gratitude to her for what she went through all for the sake of public service.

Diezani is the ultimate illustration of never judge a book by its cover. Yes, she appears humble, unassuming, calm, and carries on with a live and let live attitude, but beneath that calm, gentle, humble mien is a person in pain.

According to her, she was diagnosed with body dysmorphic disorder (BDD) due to hormonal disorder causing gravity in the thoracic and cardiovascular area leading to accelerated gravitational pull of the breast area during, (and she laid emphasis on during, not before) her public service as minister.

In her words, “please tell the illiterates and buffoons on social media castigating me for buying bras prescribed as part of my medical treatment for BDD to read up on BDD, and occupational hazard…”

In essence, the office created an occupational hazard for which she had no option but to seek medical treatment. Again, in her words, her physician informed her that the proximate cause of her BDD, was her public office; that there was no cure for BDD; and she therefore had no alternative than to endure the pain, lifelong pain, of treatment.

According to her, “greater love hath no one than she who would sacrifice a lifetime of pain for her country. In other climes they erect monuments to such rare people, but in Nigeria, hmn., no gratitude. But I did it for God and country. I have no regrets.”

But then she added quickly, that she has some regrets. That if she knew that Nigerians would not appreciate her sacrifice, she would have resigned, but then her physician told her that the damage had been done already.

As a deeply religious pious woman, she still was reluctant to go for the diamond encrusted bras but after consulting her religious elder, she was again counseled that the gods gave their blessing on one condition: that the bras be christened the “the heavenly stars” series, hence the name heavenly stars.

Finally, as a princess, she needed diamonds encrusted bras befitting her status. She actually wanted something less expensive, but the physician advised that only diamonds would do. It had something to do with her royal (blue) blood.

According to her, she is forced to divulge this little secret just for posterity sake, even though she knows that it wouldn’t make the vast majority of those angsting for blood on social media to have a rethink.

Today, Diezani lives with the scars of the occupational hazard she suffered during her public service. She has been stripped of her medically prescribed bras, and now left alone to face lifelong BDD challenges.

She is now left with no longer 100% diamond bra, her preferred precious stone, but a mix of diamonds, sapphire, opal, encrusted bras, one of which is worth only $10M. To hear her talk about it in her humble way, it is valued at a miserly $10M. Pray, who is so stone hearted, in this matter of precious stone, that would not be moved to tears upon reading about the miserly $10M sapphire & co. encrusted bras that she now has to manage. It’s a come down in status for her, for which all Nigerians owe her a debt of gratitude.

Clearly, anyone with conscience would be moved not just to tears but empathize with her.

Now, to the gratitude part.

According to her, the cost of the bra at the time of purchase was only 2M, and just so as to draw attention to the fact that she’s frugal and not giving to frivolous spending habit, she emphasized the word ONLY before $2M.

And then she asked, when was the last time Nigeria got more ROI on any investment. Again, she added, “Nigerians are ungrateful creatures.”

As Nigerians are again gearing up for yet another presidential race in 2023, who could be better to succeed PMB than a woman who is humble, pious, and has the enviable record of ROI on investment of public funds than Diezani, a diamond in the rough. The next election in 2023 presents an opportunity for Nigerians to either pick up the diamond in the rough or side step it.

Nigeria Has to Have World’s Worst Electricity Crisis

Pyrates Confraternity: Obi Not A Member