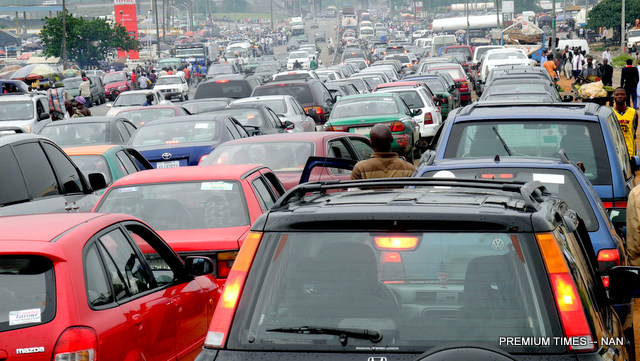 The gradual Lagosianization of Abuja

The whole reason Nigeria moved its national capital from Lagos to a vast piece of land, smack in the middle of the Federal Republic Nigeria, was to get away from the monumental congestion of Lagos. The result was Nigeria’s new capital city: Abuja. The congestion in Lagos was/is the result of several factors: the sheer press of its humongous human population — estimated now at about 21 million people; the largely unplanned, sprawling megalopolis it became, from its modest beginnings as the command-post of British colonial administration in Nigeria; which simultaneously gave the British easy access to the sea for purposes of commerce and warfare, should the natives become overly restive; and the economic powerhouse Lagos became, as a result of its being the administrative nerve-center of colonial and postcolonial Nigeria, its huge workforce, consumer market and tax-base.

Lagos was Nigeria’s capital from 1914 — the year the British colonial administration amalgamated the Southern and Northern “protectorates” into one colonial state — until 1991; when Abuja became Nigeria’s new Federal Capital Territory (FCT). From 1914 to 1960 — the year Nigeria became independent of Britain, a period of 46 years — Lagos was the beautiful, prosperous, proud capital of Nigeria; albeit, saturated with the hubbub of politics, commerce and the episodic ethnocentrism of the Yoruba, who did all they could to remind everyone that Lagos was still in their neck of the woods, and therefore, owned by them, although playing host to the Federal Republic of Nigeria as its capital.

Two pivotal events changed the dynamics as well as trajectory of Lagos in the history of Nigeria. The first was the two military coups that took place in 1966: The January 15, 1966 Coup and the July 29, 1966 Coup. The first coup toppled the civilian government of Nigeria, leading to the first military regime Nigeria had, under Major-General Aguiyi Ironsi. The second military coup led to the overthrow of the Ironsi regime and the installation of the first Northern-dominated military regime Nigeria had; headed by General Yakubu Gowon. As a result of a concatenation of factors too numerous and too complicated to get into in an article of this nature, Nigeria was plunged into a three-year bloody civil war that claimed the lives of nearly three million people.

The second major factor that changed the dynamics and trajectory of Lagos in the history of Nigeria, was the so-called “Oil-Boom” which some people facetiously refer to as Nigeria’s “Oil Doom.” It began in 1970, virtually at the close of Nigeria’s fratricidal war. The following year, 1971, Nigeria joined the Organization of Oil Producing & Exporting Countries (OPEC). A 2005 estimate put Nigeria’s daily production of crude oil at 2.413 million barrels; making Nigeria the world’s sixth largest producer. It is further estimated that since 1960, Nigeria has reaped US$600 billion in oil revenues. Huge oil-based inflows of revenue continued for Nigeria into the decade of the 1980s, only beginning to reduce in the early-to-mid-1990s.

It was that kind of revenue flow that made Nigeria confident enough to embark on a number of major projects, not least of which was FESTAC ’77, the construction of the Third Mainland Bridge in Lagos, an “Africa-centric” foreign policy that was financially generous to many African countries and Afrocentric causes, as well as fueled domestic graft on a stupendous scale. It was also the confidence the unprecedented revenue flows crude oil sales afforded Nigeria, that made it possible for the military government of Murtala Muhammed to embark on the bold, albeit, needed step of moving Nigeria’s federal capital from Lagos, and building a brand new capital city from scratch in Abuja.

As a planned city,[1] Abuja was built mainly in the 1980s. It officially became Nigeria’s capital on December 12, 1991. The fundamental idea of moving Nigeria’s capital from Lagos to a virgin land in the middle of the Federation and to build it up from scratch, was to get away from the lack of planning, congestion, unbelievable traffic snarl ups, heat, humidity, disorderliness, poor quality of life, filth, etc., that was/is part and parcel of the Lagos experience. True, the rich and famous as well as those who managed to get-rich-quick through fair and foul means; carved out for themselves verdant, luxurious enclaves in a few pricey parts of Lagos Island, Victoria Island, Banana Island and/or Mainland Lagos; but for the teeming masses, Lagos remained/remains a grueling cesspool with no respite from its torment in sight.

Abuja was meant to get away from all that. To not only make life safe and sound, but to provide a high quality of life for its Nigerian residents, as well as to make them proud of their capital city internationally. To be sure, some of that was achieved. However, once again, the vast majority of the residents of Abuja have become sequestered in barely livable virtual ghettos, as chaotic as anything in good old Lagos. If you are in any doubt, visit Pape, Nyanya, Karu, Gwagwalada, Kuje, Anagada, Lugbe, Idu/Karimo, Gwagwa, Jiwa, Jikwoyi, Tungamaje, Kuchingoro, Karamajiji or Gosa; and then, decide for yourself.

The problems with and in Abuja are multiplying slowly but surely by the day. Here are a few glaring ones:

For a few years, the former Minister for the FCT, Nasir Ahmad el-Rufai, the current Governor of Kaduna State; tried to hold the line on standards for the management of the FCT; but with his departure, the slide towards what I call the precipitous Lagosianization of Abuja, is moving at breakneck speed. Without a serious and determined rescue mission, I give Abuja five more years and it would have completed its transformation into the new “Lagos” in the middle of Nigeria; complete with pockets of opulence and aesthetic beauty, engulfed by huge swaths of proletarian ghettos and semi-ghettos, with streets and highways cluttered with old and aging cars, belching lung-choking carbon monoxide; driven by frantic, angry, frustrated, benumbed motorists, helplessly invoking the name of the God of their religious faith and swearing at the faceless institution called: Government!

The current Minister of the FCT, Muhammadu Bello, has been an unmitigated disaster, a total waste pipe; lacking in imagination, innovation and pro-action. He has squandered nearly eight years doing virtually nothing for and with the City of Abuja and its suburbs. To this day, I and several other highly-placed people I have had the privilege of speaking with, cannot fathom why President Buhari reappointed him Minister of the FCT for a second term; after his utterly lackluster first term as Minister, other than, perhaps, two reasons: nepotism (they are both Fulani and Muslim, and some say, longtime family friends), and placing loyalty over and above competence.

The City of Abuja and its suburbs need professionally trained City Managers, one for each of the suburbs that comprise the FCT, and one for the Abuja metropolis. Such professionally trained City Managers, will completely overhaul the administrative/bureaucratic nightmare known as AMMC; substituting in its place, an efficient machinery for solving problems in and of the City of Abuja and its suburbs; as well as turning Abuja into a world class city, that makes it onto the list of the great cities and tourist destinations of the world

Aniagolu is a professor of political science and history in the United States.

APC convention: Adamu emerges as the new National Chairman, plus the full list of aspirants endorsed by govs

History Is Stubborn, It Can Not Be Erased!