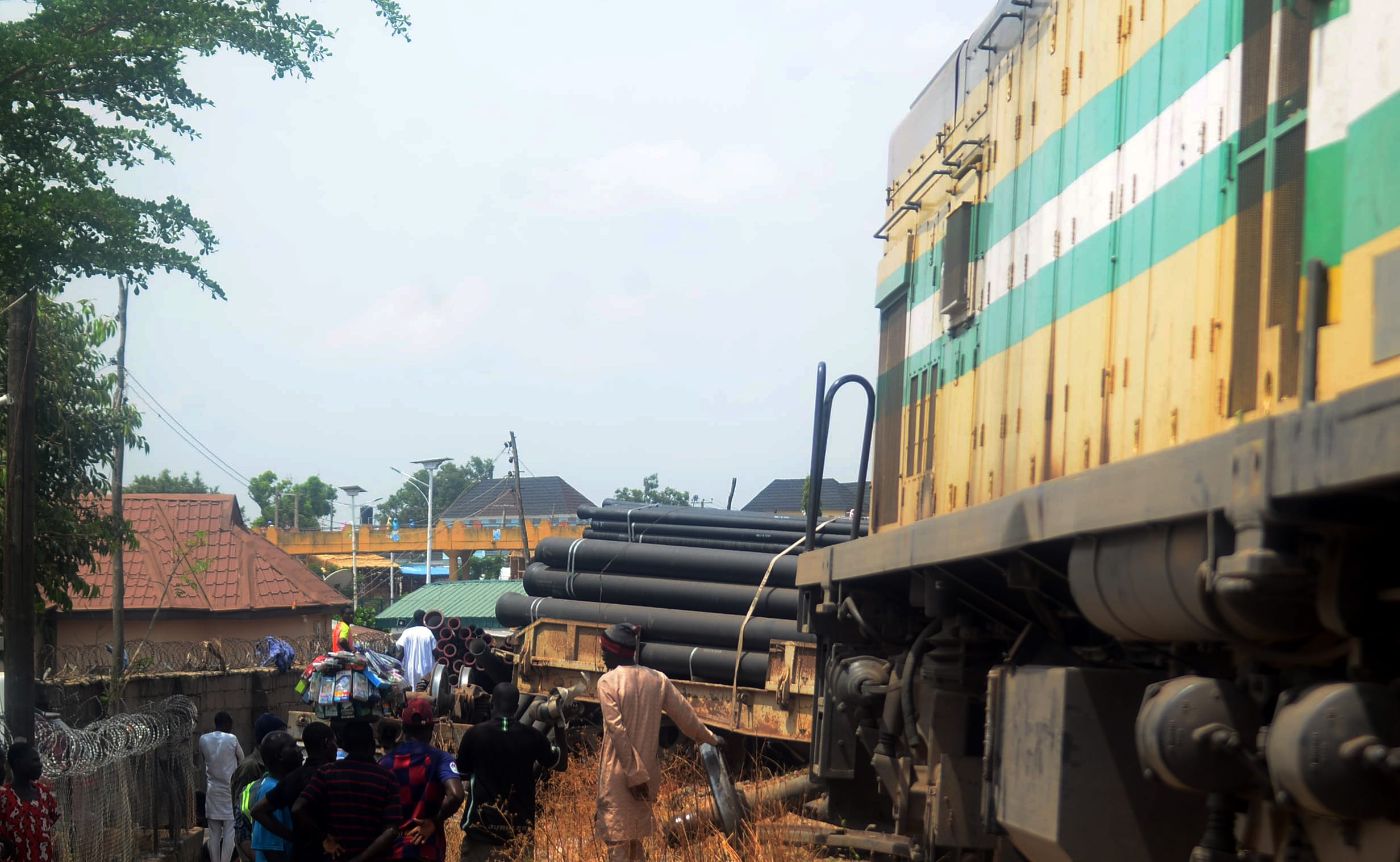 Are we being ruled by coincidences or by conspiracies? There was a British passenger liner, the Royal Mail Ship (RMS) Titanic. It was a ship of luxury boasts that was built to sail forever; but it sank in the night of 14-15 April, 1912 during its maiden voyage. In Nigeria, over 270 secondary school girls were abducted in the night of 14-15 April, 2014 by terrorists in Chibok, Borno State. Eight years after, scores of passengers were kidnapped by terrorists in the night of 28 March, 2022 in Kaduna State following a train attack. Conspiracy theorists will likely be looking for parallels between the 2014 Chibok girls matter and the 2022 Kaduna train attack. If such cynics exist, they would be like British author, Anthony Horowitz, who says in his ‘Point Blank’ that he did not believe in coincidences. He wrote: “where some people see coincidence, I see conspiracy. That’s my job.” Chibok happened on an anniversary of the Titanic disaster while the Kaduna train attack happened on the seventh anniversary of the 28 March, 2015 presidential election that brought the present government into power. Like in 2014, there is a general election next year and the stakes are as high as they were eight years ago when Chibok happened.

Man, throughout history, has continued to search for meaning in coincidences. If Swiss psychologist and psychoanalyst, Carl Gustav Jung, were here, he would describe the above date patterns as “meaningful coincidences.” And I think he would be right. Builders of the Titanic boasted that it was unsinkable. The Titanic sank in the night of April 14-15, 1912. Founders of the PDP boasted that it was titanic in size and resilience, the largest and strongest party in Africa. Chibok happened to it in the night of April 14-15, 2014 and it foundered. The Buhari government won the historic March 28, 2015 presidential election. It has since been describing itself as a moving train, unstoppable going into next year’s election. You can’t stop a moving train is a popular saying that was true before last month. The Kaduna train attack happened on March 28, 2022 and put a lie to that cliche. Did some people sit somewhere to set those patterns or they just happened?

A video was released last week by the train terrorists. In it, they showed off the managing director of Nigeria’s Bank of Agriculture, Mr Alwan Hassan, as a booty. They sensationally announced in Hausa that they were setting the man free “in the spirit of Ramadan” and because the man was old. One of them said: “We are the group that kidnapped passengers on the train a few days ago. Among them is this man that was pleading with us due to his old age and we felt pity on him due to the month of Ramadan, so, we want to give him back to his family. But the government should not misunderstand this, as it is a gesture we made because of the pity we had on him.” They then asked the man to make some remarks. And he said: “I want to witness to everyone that they took pity on me due to my old age. I was told to go out but I want to assure everyone that I left huge number of people behind and they are in situation that requires help for them to be released fast. I hope that government will meet the head of this group to release them as soon as possible.” Another of the terrorists took over and said: “I want to reiterate that what he said is true. Don’t try to investigate us immediately or to rescue them because killing them is not an issue for us. We don’t want your money, if we want money, we wouldn’t have carried out the attack. You know what we want.”

Where are the terrorists keeping the captives who include poor, pregnant women and children? Abuja-based newspaper, Daily Trust, wrote that they are in Kaduna, the security capital of Nigeria. Daily Trust “observed that the terrorists, clad in military uniform, made the video at the Forward Operational Base in Polwire, Birnin Gwari, Kaduna State, which was attacked on Monday.” The newspaper added that “one of the Armoured Personnel Carriers (APCs) that were burnt during the attack was used as a background in the video.” If that observation is correct, it is enough confirmation that there are parts of the territory of Nigeria that are no longer under the control of Nigeria. Of course, such places exist till tomorrow in Borno State where we keep telling ourselves lies of victory over the enemy. A fighter jet of the Nigerian military disappeared in March 2021 with its crew in Borno; the carcass was found in March 2022 inside a forest in Borno called Sambisa. Yet, it is said to be part of Nigeria.

The Titanic did not sink suddenly. There were warnings. History says its operators, throughout the ill-fated maiden journey, received iceberg warnings. But the warnings were ignored. Even when a nearby ship alerted the vaunted Titanic crew of an ice field, the message was never relayed to the ship’s bridge. By the time the captain and crew realized the precariousness of the situation, it was too late. The ship’s starboard hit the iceberg and ruptured its supposed watertight compartments. But as the ship foundered, there were musicians onboard who thought songs were lifeboats. They sang and danced while death clung to terrified passengers. What song rocked that final hour? History says ‘Autumn’; history also says it was ‘Nearer My God to Thee.’ Whichever it was, it was a song of death; and it rang through that last night, hollow and flat. There may not be agreement on which song the entertainers clutched to, but there was a confirmation that “none of the musicians survived the sinking” of the Titanic. As it was with the Titanic in 1912, so it was with our PDP in 2015. That party’s musical clowns sank it with boastful songs of suicidal arrogance. They said the PDP was the biggest party in Africa and it would sail for sixty years. It hit the Chibok iceberg and sank in its sixteenth year. It is happening right now with the APC. It uses exactly the same pompous adjectives deployed by the PDP in its years in power. The APC daily sings its Autumn; it insults every warning. Very much like the PDP, it won’t benefit from the wisdom of the tragic history of the unsinkable that sank.

When you know that the king is on your side, you conquer all fears. Chinua Achebe puts it better in his Arrow of God: “A boy sent by his father to steal does not go stealthily; he breaks the door with his feet.” The men who abducted the Chibok girls did not do it in a hurry. They had enough time to load them into trucks. The gunmen who stopped APC’s moving train in Kaduna also reportedly had buses many enough to transport their human booties. You remember how long it took Goodluck Jonathan to believe that Chibok was real? Today, two weeks after the Kaduna killings and abduction, has anyone heard a word directly from the mouth of Jonathan’s successor on the train tragedy? We have a regime that fights terrorism with nepotistic, complicit yawns; it roars only when its lair is directly threatened. You remember how the president described the EndSARS people: “those who wanted to drive me away from here.” As long as the bandits lend themselves the wisdom not to cross the redline which the EndSARS ensemble crossed, they are likely to continue to enjoy the privileges of Omo Onile. Bandits use phone undisturbed; they plan the next heist; they attack, kill and kidnap and disappear into the savannah with their booties. They do all these unmasked, unhidden in the land of their birth. Who are they?

Nigeria hosts a stiff contest between war and peace. In this country, “almost everything is true (and) almost nothing is true” (Tim O’Brien, The Things They Carried). But we are a nation at war. And in war, all points are taken if the soldier will outlive the bullets. Was the 2014 kidnap of Chibok girls politics by other means? Is the current insecurity downpour in Kaduna contrived for electoral gains? Is there a confluence joining the rivers of politics and terrorism in Nigeria? It is not my job to find answers to these questions. Some people were elected or appointed and are paid to explore the waters for sharks. It is their job to answer queries on why we suffer a deluge of bloody attacks and abductions.

There is a scramble for the soul of Nigeria. And this is not just among politicians and businessmen. At another level, there are the terrorists, the bandits and their enablers. Like the political class, they are furiously tugging at the entrails of the nation. They move unrestrained. People die daily, Nero is fiddling. At least eight people were killed during the Kaduna train attack. One of them, a labour leader from Kwara, was shot in the head; another was on the phone with his wife discussing his next meal when bullets silenced him. A shot medical doctor wanted to live and she tweeted ‘help.’ It was her corpse that Nigeria helped into the icy loneliness of the morgue. How many more died? Five. The remaining five’s stories are no less gory. There were twenty six others who sustained gunshot injuries. It took us many days to know exactly the number of students stolen from Chibok. We do not know yet how many of the Kaduna train passengers were stolen by the terrorists for ransom. Almost a month after the attack, we are still scratching our heads asking how many were truly in the train and how many were abducted.

APC and its government should listen carefully to the voice of silence in the rash of killings and abductions. Relations of the abducted were on the streets of Abuja last week clutching #BringbackOurRelations placards. They were on TV too confirming receiving non-ransom-seeking calls from the terrorists. The Chibok tragedy was the iceberg that sank the titanic of the PDP. Do you think the train attack has the capacity to be the APC’s own Chibok? We cannot be certain about anything yet. But this government is a poor copier of its predecessor’s scripts. It copies the answers including the (wrong) exam number. The former ruling party thought that Chibok was a puny enemy political action, a mere attempt at political distraction; it believed the thunderbolt would peal away. And so, the then presidency employed silence and inaction as its get-away strategy. But it didn’t work; in fact, the strategy became the hard wood which energized the fires that cooked the PDP. Because the then president refused to talk and work, his wife, Patience, apparently believing that the whole tragedy was a strategy, took over, wept and made the famous “Dia ris God (There is God),” video skit. That intervention was a catastrophic turning point for the Jonathan presidency. It was its Autumn. YouTube owners, Google, a year later, announced the clip as Nigeria’s most viewed non-music footage ever. We have not had the luck of watching this regime’s own tears – even if they are crocodile’s.

President Buhari; Concerns On The Status of His Health.

Gumi AGAIN!, urges Nigerians to ‘pamper’ bandits for them to repent