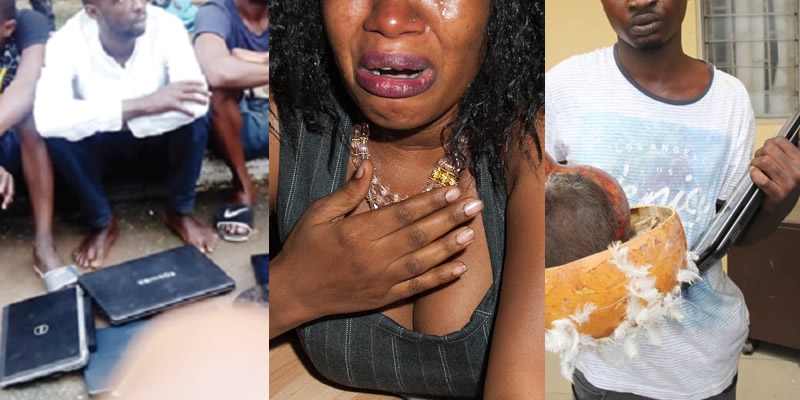 The craze for quick money, fame and material wealth is driving the inordinate propensity of our youths into despicable and fetish practices like diverse blood rituals, eating of excreta, incestuous sex, sacrificing blood relations, spraying money in the public for rituals, bathing in the public places, eating human body parts, consuming hard drugs and fetish concoctions, walking naked in the open among other bizarre rituals. How our youths got to this mindless desperation for money without working to earn a living on their own is frightening. The Creed: “There’s dignity in labour,” does not make sense to them any more. They even detest to hear “hard work” as they often ask “who hard work helps?” The kind of flashy and ostentatious lifestyle they desire is not affordable by those who got their money through legitimate means. They venture into the crude and devilish activities for the wrong reasons.

A video went viral recently which led to series of warning posts on social media to parents on the need to warn their daughters against befriending Yahoo boys. The girls are also warned to desist from attending parties not held in public places like event centres and open fields.

In the video, girls in skimpy dresses were seen begging for mercy while some were being dragged into the inner part of the party venue. Their boyfriends had suddenly turned to ‘demons,’ clothed in red wrappers, tied red bonds on their heads with daggers firmly held in their hands to butcher the girls. Now, the girls were begging for their lives to be spared by the guys they accepted to be with. While the beginning drama was going on, “dorimen” music was blaring at the highest volume to overcome the screaming and cry for help by the unfortunate girls who became preys in the net of their Yahoo boyfriends. Like the devils that have no mercy or value for human life, the girls were stabbed several times, slaughtered and beheaded. Pleadings by the dying girls fell on deaf ears because their heartless lovers had to perform the rituals.

A few days ago, a video surfaced online of a guy in Owerri, Imo State, who invited his mother to visit him in a hotel. The innocent mom went there with a bowl of fruits to give her son not knowing that she was a target for money ritual by her Yahoo son. It took the Providence for the mom to wrestle with the macho man to escape untimely death by jumping out of the window despite the burglary proof but not without sustaining serious injuries from several stabs in the course of the struggle.

Only last week, the suspect that allegedly killed his 300 level university of Jos undergraduate girlfriend over a night in a hotel has been arrested. Her eyes, breasts and other vital body parts were removed. Until then, nobody knew that the innocent looking guy is a Yahoo boy.

Middle of last year, a pregnant student was invited by her boyfriend and they went somewhere in company of his friends, she was killed, ripped her tummy open and removed all her internal organs including the foetus. Her lifeless body with empty stomach was seen in the bush.

In November last year, a woman was invited by her Facebook friend to a hotel. After rounds of sex, the next day, her lifeless body was found with her tummy ripped open and her vital organs missing. Till now, the suspect has not been apprehended.

Students of a particular university are known as specialists in Yahoo rituals. As far back as 2009/2010, the institution had become the training ground for what was then known as Yahoo plus. Today, virtually all institutions of higher learning have become breeding grounds for the crime.

However, it is not every ritual that leads to physical death. The common ones are those that will appropriate the virtue of the victims for fortune and money rituals. It is done through sex!

A friend told me of an undergraduate who wanted to renew his money ritual. He took one of his girlfriends to the spiritualists. Upon checking, it was discovered that the girl had since been “used.” Meaning she has lost her virtue or glory through sex. He brought another girl, he was told the same thing that the new girl also had been rendered empty. The student, who is said to be a big boy with a fleet of cars in the university town became desperate knowing the repercussions if he failed to meet up, began to take girls one after the other to the spiritualists. To his surprise, by the time the number of “used” and rejected girls reached 100, he broke down in tears. He was not sure if he will ever find a complete girl for the ritual before it is too late. My friend said “the implication is that many of our beautiful girls in schools are no longer real and complete daughters of their parents. They are mere empty shells and walking shadows of their old selves.”

The “used” girls are just existing and not living. Such daughters may never amount to anything great or meaningful in life. What a pity! Apart from Yahoo boys, “aristos” who are mostly businessmen and politicians, also use the girls for fortune, fame and power rituals.

Parents should stop pretending to be too busy to look after their children. They are partly culpable in this horrendous crime. Their boys left home as “good boys” only to return with weird hairstyle, studs or earrings in their ears, keep strange company of friends and spend money lavishly without asking to know the source is condemnable. That things are so rough economically is not an alibi to entertain criminal tendencies by looking away from a potential danger that may later consume the parents themselves as “items” for money rituals.

The same thing goes for the girls. The girls start with being rebellious to parental control. They want to feel among, roll with “ruling” cliques of wave making girls in town, adorn unaffordable trendy designer wears and be buoyant enough to live big without legitimate jobs. Parents must clip their wings while they are still able to do so. Hailing daughters for doing what their parents can’t afford is an impetus to sliding deeper into immoral lifestyle. Such compromised parents will regret their negligence and act of dereliction when it is too late to reverse the situation. It is advisable for individuals to watch carefully while predators like Yahoo boys are prowling. Indeed, perilous time is here!

Thank God for her making and taking her stand against all odds. First to disabuse her mind about what will people say. Two, for her to realize she has a life and dreams to fulfill outside of a man and marriage. Three, that she is responsible for herself and accountable to God. I hope other women will come to terms and their senses to know this truth and live it. Life first, then, anyone and anything else may follow. – Olayode S., Lagos.

I can relate with the ordeal of this woman. This was similar to my case. Mine was 16 years of constant abuse and denial. So mean, stingy and selfish. He hated to see me being appreciated by anybody else whether man or woman. He made me developed a self low esteem. He hurt me badly and nobody was available for me because my people believed his lies having successfully isolated me from my friends. I did exactly what that woman did. Inside the aircraft, I called him and said: “I’m calling to say goodbye. If God permits, we will meet again, definitely not as husband and wife. It’s good riddance to your bad rubbish. I’m gone for good. My children are here with me. Carry on with your miserable life. Bye!” Before he could say ‘jack’ I switched off my phone because the pilot was already on the runway. That’s I got here. I perfected everything under his nose without knowing. Thanks for the good job you’re doing. God bless you sir. – Mrs. B. A, Canada.

MOGHALU IS WRONG. NIGERIA IS UNIQUE, UNLIKE ANY OTHER FORMER COLONY

President Buhari, You Are Wrong – Chukwumerije