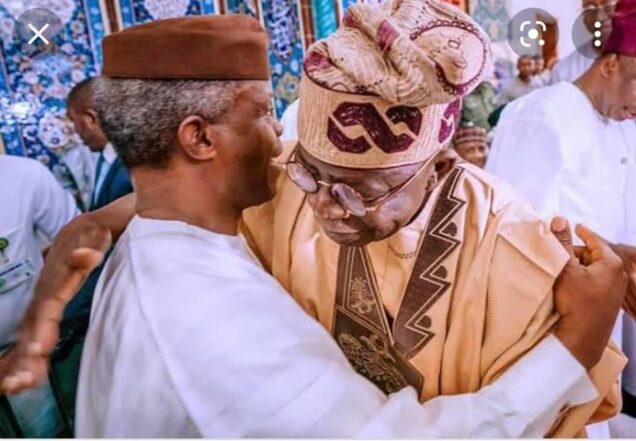 Questions the presidential candidates must answer

As the 2023 presidential elections campaigns kick off, though we do not know all the aspirants of the upcoming elections, Asiwaju Ahmed Bola Tinubu has declared that he is running and Osinbajo is being urged by supporters and well wishers to run for president. Also, Nigerians have an idea of those that will be running but are bidding their time.

If one is to go by the antecedents of both PDP and APC and their candidates during election seasons, they are all going to feed Nigerians lies upon lies which every Nigerian is tired of. Along with their manifesto, each candidate must produce an IMPACT ASSESSMENT REPORT, which must include the parents names, date of birth, names of candidates, assumed names, old names, aliases, schools attended, certificates and certification attained with dates at every institution of learning they attended. They must also declare their assets in Nigeria and in the diaspora. (NIGERIANS DESERVE TO KNOW WHO WANTS TO LEAD THEM).

Candidates must also meet eight out of the ten criteria below;

Nigerians are discussing candidates that have declared and yet to declare their intentions to run, and rightly so. From what is being put out there, what seem to be paramount to the majority of fair minded patriotic Nigerians center around birth, age, school, health, finances, capacity, intelligence, social clout, religious tolerance, generosity and the health of the candidates, and again, rightly so.

The Nigerian people are tired of the same tired minds and brains, unhealthy, fraudulent, incompetent, self centered and sick ‘leaders’ who have and will continue to mortgage the future of Nigeria and the future generations of Nigerians, who will continue to play the different ethnic groups against one another, using religion and ethnic nationalities as there preferred and potent weapons.

Nigerians must ask the candidates their views, their stands and their opinions on RESTRUCTURING and the constitutional review, and or a complete overhaul of the Nigerian 1999 constitution. These questions have become pertinent because of the the unfairness and the inequalities from the fraudulent 1999 Nigerian constitution which favors a particular region over the rest/others.

There are different regional advocacy that have emerged towards the dissolution of the contraption called Nigeria, which must be taken seriously if we are to continue to have a ‘one Nigeria’. Terrorism and bandits attacks have become an extremely serious issue which will play a major impact/role towards the long term economic, political and social survival of Nigeria. For these reasons, establishing state police, state controlled security outfits and other law enforcement units must be allowed to be established by the states. These must be reflected in the new constitution. The big question the candidates must unequivocally answer is how committed are they to ensuring that the above is achieved?

Or should we ask that, in view of the call for separation and cry of marginalisation, will they call for restructuring, and or, a constitutional conference to amend or expunge the parts of the constitution that are creating problems?

Has anyone ever seen where a King Maker becomes KING?

The moment that happens then there is a bit of an issue. When an Installer says he or she wants to be installed.
The question is when the King Maker turns King, who does he or she report to? Who can actually then look at his face and say You are wrong or right on certain policies and actions? In other words, who will check and balance him?

There are cracks already in the South West of Nigeria’s political permutations towards who becomes the consensus Presidential candidate at 2023 general elections especially for APC.

There’s Tinúbú camp on one side and Òsínbàjò’s camp on the other side. The vice President appears to be enjoying the power of incumbency and adjudged to be trusted in the Northern camp than Tinúbú. The latter obviously hold the ace in the South West. The next elections will be won by the candidate with the highest votes from the West and the North it appears.

Ibi agba la n ba agba. (An elder should be an elder)

In actual sense, BAT has the antecedents to qualify him for becoming the President and change the narrative, but the controversial issues surrounding his age, wealth, academic qualifications, origin among others have inflicted negative aspersions on his image. Also, he has too many enemies in Lagos State who think that he is ‘atohunrinwa’ (alien).

Both men and other protégées have done very well. Extremely well to say the least.

But the Young Shall Grow..,.

Also, Tinubu seems not to have none of the people called the ‘owners of Nigeria’, OON in his favor. Even the junior ones like Babangida Aliyu who has fired the salvo.

To a great extent in my reasoning, what makes it looks dicey now is his riches that some people are ready to help him squander. I believe even down among his cronies, they know that their principal is hardly sellable but truth telling at this time will look dangerous, ‘rebellious’, and ‘unlucrative’, hence, caution treading.

Tinubu’s health is also now questionable in the minds of Nigerians who do not want another sick man to lead them.

Lastly, why do the same people who accuse Abubakar Atiku of having a lot of baggage, who called and still call him a thief, that such character, despite his wealth of experience, should not come near the presidency, but now, Tinubu has suddenly become the “preferred” among them and queuing up behind him, giving all sorts of excuses for doing so, that he is great, he is the Awolowo of today, etc?

For the records, it must be stated that all the allegations mentioned above about Atiku and Tinubu remain just that, ALLEGATIONS, because neither Atiku or Tinubu has been found guilty of fraud in a court of jurisdiction.

However, the questions that these politicians need to ask themselves and genuinely answer with all sense of responsibility are:

These, among other things should be what the electorates must look for in any candidate that presents himself or herself to lead the nation.

Like I said earlier, I think BAT has the charisma, doggedness, intelligence, resilience to get this country out of the woods and a bit of toughness which some people consider to be wickedness. Unfortunately, the oozing stench of his body odours is becoming stronger such that it’s usurping the aforesaid qualifications. It is good that the timing has gravitated away from the era of unanswered questions, or has it?

COMMENT – For me, I’m not supporting Tinubu, but I’m not opposing him yet either. I will decide what to do when I see the quality of opposition to his ambition. If we’re left with a choice between Tinubu and Atiku, or Tinubu and Okorocha, or Tinubu and another Fulani of any shade, I will have no choice but to support Tinubu – Ugo Egbujo

The Dunamis-5: In Defence of Pastor Enenche

Obi’s visit to Egypt – why the brouhaha?