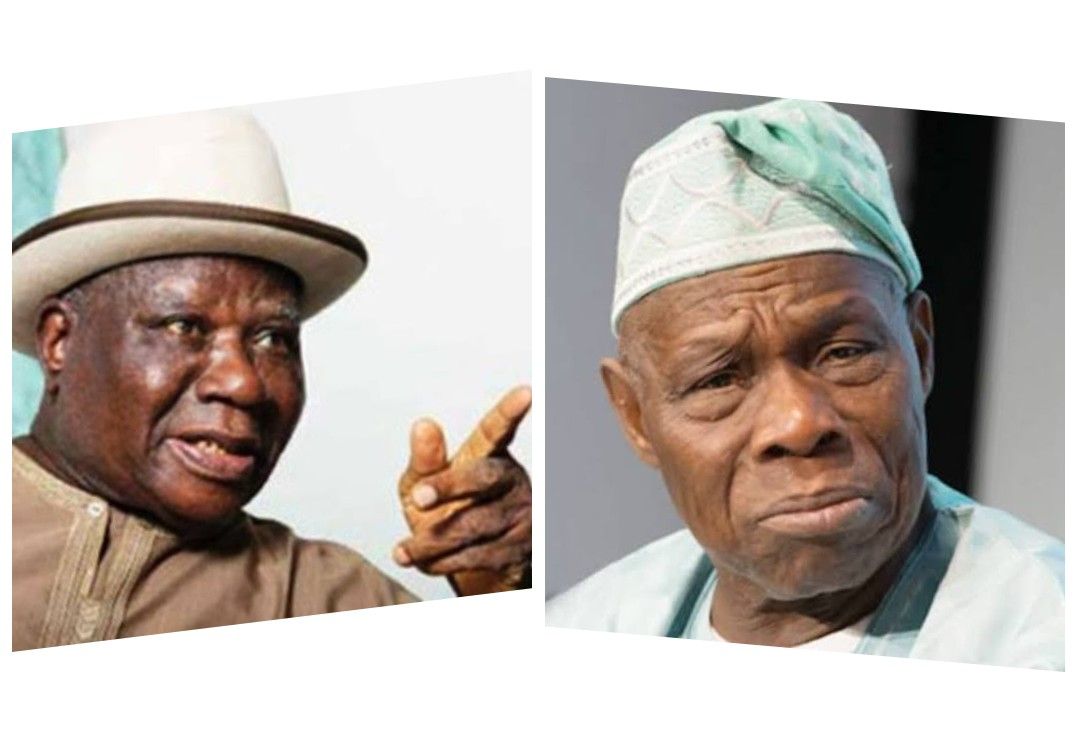 OBASANJO THE STATESMAN AND CLARK THE TRIBESMAN

Northerners call him SIRAJO but Olu Obasanjo likes to pride himself as a man of the world. Most public statements he makes and what he does are full of underhand pettiness and native mischief with a keen eye on the private gain.

Obasanjo has been an insuppressible interloper in Nigeria’s public affairs since 1975 and every Nigerian leader since that date has had to contend with his public nuisance. Sanni Abacha devised a final solution, determined to kill the irritant in Yola Prison where he threw him, but for the intervention of the world.

That didn’t stop Obasanjo from continually interfering in the succeeding Goodluck Jonathan Government. He flaunts his role in receiving the instrument of surrender and ending the civil war in 1970 and his two time presidency of Nigeria, none of which he worked for or deserved.

Obasanjo has never been loved by Nigerians, not even by his own tribesmen, the Yoruba. So it is easy to hide his failures in the woolly and indefinable identity of a statesman. He has betrayed his own Yoruba people so many times that it should be shameful for him to claim their kinship.

Nobody seems to remember that Olu Obasanjo, also a Major in the Army at the time, was allegedly fingered in the January 1966 coup of Major Kaduna Nzeogwu. Obasanjo, who was on a posting to Maiduguri to eliminate quelea birds plaguing the Maiduguri region at the time, domiciled in Kaduna with Major Nzeogwu and was alleged to have gone into hiding on the day of the coup.

He betrayed Benjamin Adekunle in the takeover of the command of the Third Marine Commando Army Division during the civil war, where he was shot in the buttocks at the Owerri sector while running from the Biafran enemy. He betrayed him again in the troubles leading to Adekunle’s exit from the army.

During the court martial following the February 13 1976 coup where Murtala Mohammed was assassinated, it was Olu Obasanjo who allegedly without evidence, named Col. Wash Pam as part of the coup d’état. The only evidence given was that Col Pam was the friend of Col. Bukar Dimka, leader of the coup. Col. Pam’s White wife committed suicide afterwards.

Olu Obasanjo betrayed Chief Obafemi Awolowo and the Yoruba people in the twelve two third election dispute saga leading up to the commencement of the Second Republic. Obasanjo was shown to have voted for Shehu Shagari in that election.

Again, Olu Obasanjo betrayed M.K.O Abiola and the Yoruba people in the dispute arising from Ibrahim Babangida’s diabolic cancellation of the 1993 presidential elections results which threw the nation into turmoil for half a decade. He told the world in East Africa that M.K.O Abiola was “no Messiah” even after the man had won a landslide victory in a keenly contested presidential election.

It was Olu Obasanjo who ordered the massacre at Odi in Bayelsa State, where an entire community was killed and property destroyed by rampaging soldiers. Obasanjo’s hatred for the people of the Niger Delta has never been hidden.

In the two times he ran for presidency, Obasanjo scored the lowest possible votes from among his own people. Without the love of his own Yoruba people, what other way can Obasanjo identify himself than to assume the intangible and fugitive title of statesman?

Obasanjo, for all his worldly claims of statesmanship, has no worthy accomplishments to point to in Nigeria. He can junket to all the world as he wants, he remains an irritant at home, unloved and without an exemplary record or identity.

So Olu Obasanjo can call E.K. Clark a tribesman and so Clark is a tribesman grounded in love at home, the entire Niger Delta Region. He is our tribesman and we are so proud to call him our own. We love him and will stand by him because we know he keeps faith and fights for us.

If it was not for the restraining hand of Chief E.K. Clark and others like him, the Niger Delta Region and therefore the economy of Nigeria will have been in conflagration when Obasanjo during his tenure as president, caused a war with the youth of the Niger Delta. And there would definitely have been no Nigeria today for Obasanjo to practice his statesmanship.

E.K. Clark is a moral man. Olu Obasanjo is not.

Can there therefore be a reason for Olu Obasanjo’s veiled reference to the “dissolution of Nigeria”?

Pyrates Confraternity: Obi Not A Member