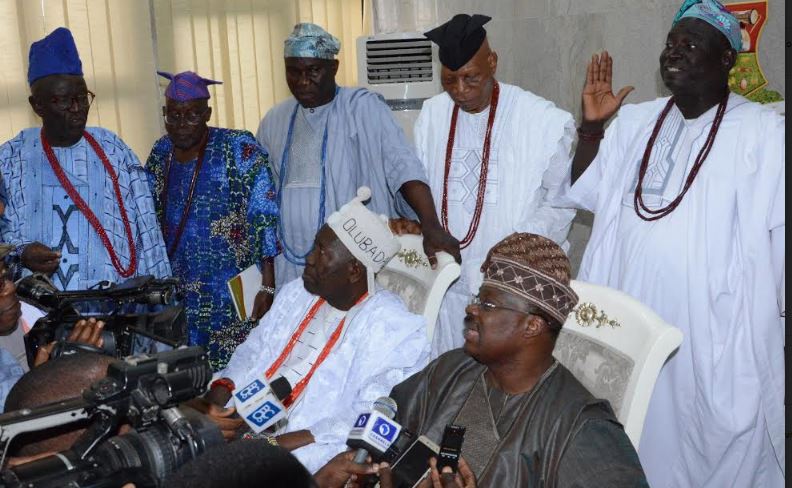 CAN AN OBA BECOME AN OLUBADAN?

Although Ibadan was founded in the 16th Century, the Yoruba people only took control of the territory around 1820 with Bale Maye Akinade as the first king. By 1850 they had established their unusual succession principle which is uniquely different from other chieftaincy ascension process in the entire South Western region of Nigeria. There are two ruling lines vis, Egbe Agba (Civil) and Balogun (Military), where Olubadan are appointed on a rotational basis. The next to Olubadan and most senior on both lines are OTUN OLUBADAN and BALOGUN, who under the Western Nigerian Law are recognized second class traditional rulers.

This process was reflected in the 1957 Chiefs Law and finally ratified by the 1959 Ibadan Chieftaincy Declaration. On May 19, 2017, the then governor Abiola Ajimobi set up a Judicial Commission of Enquiry headed by Justice Akintunde Boade, with a mandate to review the 1957/59 Chieftaincy Declaration in an attempt to modernize the traditional institution in Ibadan as championed over the years by the CENTRAL COUNCIL OF IBADAN INDIGENES such as Chief T.A. Akinleye and Late Chief Omowale Kuye (a former Accountant General of the Federation). There was also the Justice Adio Commission of Enquiry which was a precursor to the Boade commission. The Boade commission was presented with 118 petitions, 91 of which articulated the need to review the 1957/59 Chieftaincy Declaration Law.

On Sunday, 27 August, 2017, the then governor Ajimobi acting in accordance with the powers conferred on him by Section 28(2) Caps 28 Vol 1 of the Chiefs Law of Oyo State of Nigeria 2000, promoted 33 Chiefs and Baales to Obas in Ibadanland. Twenty one of the beneficiaries were physically present to receive their staffs of office at a public event at Mapo Hall, and this include High Chief (Senator) Lekan Balogun, the Otun Olubadan and the next in line to the exalted Ibadan throne. The government White Paper on the promotion of the senior chiefs and Baales was properly conveyed in Gazette No 14, Notice 27 Vol 42 of 23rd August, 2017 and Gazette No 15 Notice 28 Vol 42 of August 24, 2017 respectively. Even though the governor’s action was challenged in Suit No M317/2017 High Chief Rashidi Ladoja and Ors V Governor of Oyo State and Ors. The Justice Olajumoke Aiki nullified the said conferment because it was in contravention of the Chiefs Law and the 1957/59 Ibadan Chieftaincy Customary Law.

Chief Lekan Balogun in an interview said, “The verdict is for the governor but we are the subject of the matter. Naturally, I am disappointed at this ruling because initially there was nothing to contest. The reform ( that was done by the Justice Akintunde Boade Commission) did not touch the old system. Nobody is challenging the 1957 Declaration or changing its structure only the nomenclature changed from High Chief and Baales to king status”. He furthered said, “There are 53 kings in Lagos, so what is wrong in having more than one king in Ibadan. Thus they approached the Court of Appeal in Appeal No CA/IB/99/2018 where the judgement of Aiki, J was set aside on technical grounds without touching the merit of the substantive suit, thus sending it back for retrial.

Governor Seyi Makinde upon assumption of office called for truce between the gladiators and this was resolved through the instrumentality of a Terms of Settlement which was adopted by all parties, which also became the judgement of court. Thus the earlier gazettes was immediately set aside. The High Chiefs and Baales (while still parading themselves as kings with all the paraphernalia, coronets and Staffs of Office to booth, in contempt of court) were dissatisfied with the governor’s action and thus culminated in the filings of two seperate suits. In Suit No 1/22/2020 HRM OBA (SENATOR) Lekan Balogun & ors V Governor of Oyo State and ors.

Since the Olubadan Chieftaincy Declaration 1959 still remains the extant law by which an Olubadan can be installed in office, and it expressly stated that another Oba cannot be promoted to the Olubadan stoolship, then it is injusticiable to install High Chief Lekan Balogun as the next Olubadan without dissipating the case in court. After the demise of Oba Adetunji, the palace drummers headed to the palace of Oba Lekan Balogun as tradition demands, reason why the Ibadans are described as ‘agbotikuyo’. Truth is, the extant Chieftaincy Law does not make provision for an Oba to be made Olubadan.The question is, what if the court rules that the installation of the 33 kings and Baales are in order? The alternatives are not far-fetched the court cases ought to be withdrawn and all cases dissipated before Chief Balogun can be installed as the new Olubadan of Ibadanland.

The Food Blockade of The North And Matters Arising!