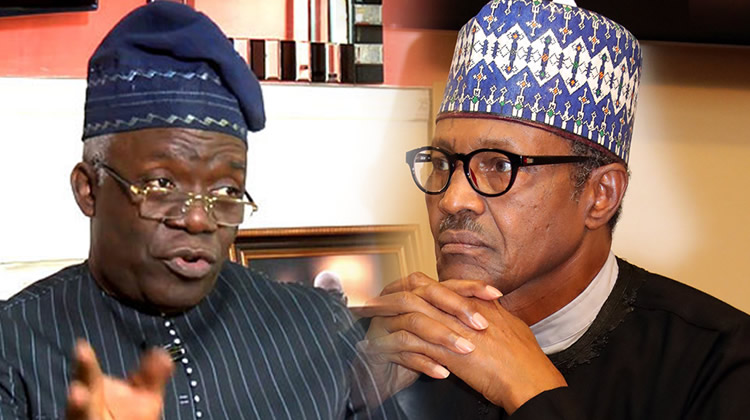 Human rights lawyer, Mr. Femi Falana (SAN), has called on the President, Major General Muhammadu Buhari (retd.), to abide by his oath of office by calling on the police not to disrupt upcoming #EndSARS protests.

Falana, who is the Interim Chairman, Alliance on Surviving COVID-19 and Beyond, said this in a statement on Thursday titled, ‘Nigeria Police Force Lacks Power to Ban Public Protests in Nigeria’.

The Commissioner of Police in Lagos State, Hakeem Odumosu, had said the police would not allow anyone to stage another #EndSARS protest ahead of the one-year anniversary of the protests of last year.

However, Falana said Buhari who himself took part in protests while he was running for office, should call on the police to respect the rights of citizens.

He added, “It is public knowledge that General Muhammadu Buhari (as he then was) and other leaders of the ruling All Progressive Congress took part in public rallies against fuel hike in January 2012 and protests against insecurity in November 2014.

“To that extent, the Buhari administration ought to restrain the Police from banning peaceful rallies against police brutality on October 20, 2021 in any manner whatsoever and however.”

Falana noted that the law guarantees Nigerians the right to hold public meetings, rallies and processions in the country.

“The threats against peaceful rallies oozing out of the police headquarters and state commands are illegal as they constitute a gross infringement of the fundamental rights of the Nigerian people to freedom of expression and freedom of assembly guaranteed by Sections 38 and 40 of the Nigerian Constitution as well as Articles 9 and 10 of the African Charter on Human and Peoples Rights Act,” the activist added.

He recalled that in the case of the All Nigeria People’s Party v Inspector-General of Police 2006, Justice Anwuli Chikere declared that police permit as a precondition for holding rallies in Nigeria was illegal and unconstitutional.

The judge consequently granted an order of perpetual injunction restraining the Inspector-General of Police and other police officers from preventing Nigerian citizens from convening and participating in rallies.

“The appeal of the police against the judgment was dismissed by the Court of Appeal in December 2007. In the unanimous decision of the court, their lordships described police permit as ‘a relic of colonialism’ which is anomalous in a democratic society,” Falana said.

He added that based on the landmark judgment of the Court of Appeal, the National Assembly amended the Electoral Act 2010 in March 2015 to impose a duty on the police to provide security for participants in public meetings and rallies.

“For the avoidance of doubt, Section 94 (4) of the Electoral Act 2010 (as amended) provides: Notwithstanding any provision in the Police Act, the Public Order Act and any regulation made thereunder or any other law to the contrary, the role of the Nigeria Police Force in political rallies, processions and meetings shall be limited to the provision of adequate security as provided in subsection (1) of this section,” the senior advocate said.

He added that Section 83 (4) of the Police Establishment Act 2020 provides that where a person or organisation notifies the police of his or its intention to hold a public meeting, rally or procession on a public highway or such meetings in a place where the public has access to, the police officer responsible for the area where the meeting rally or procession will take place shall mobilise personnel to provide security cover for the meeting, rally or the procession.

“In view of the fact that the police authorities have been notified of the public rallies scheduled to hold on October 20, 2020 to mark the first year anniversary of the #EndSARS protests, the Nigeria Police Force is required to make arrangements for the provision of adequate security for the participants at the venues of the rallies,” Falana said.

He called on the Inspector-General of Police, Mr. Usman Alkali, to direct the Commissioners of Police in all the states of the Federation to ensure that adequate security is provided for all citizens who may wish to protest against the policies of the government which are considered inimical to their interests.

I HAD A DREAM