BREAKING NEWS
GMT+2 12:32
Home News We Didn’t Say We Oppose Rotational Presidency, What We Are Saying Is… El Rufai; Blames The Media 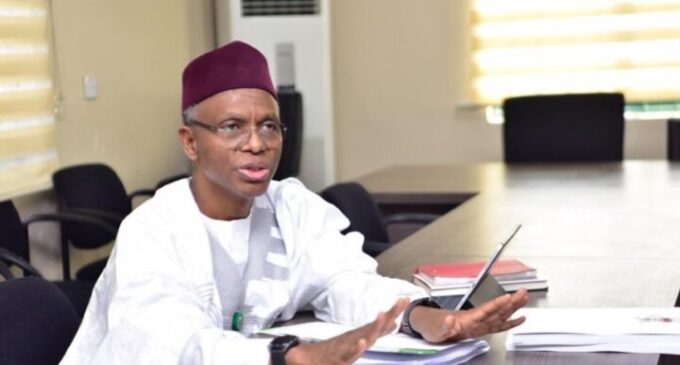 We Didn’t Say We Oppose Rotational Presidency, What We Are Saying Is… El Rufai; Blames The Media

Kaduna State Governor, Malam Nasir el-Rufai, yesterday, clarified the position of the northern governors over the power shift controversy, saying his colleagues in the north never opposed the presidency going to the south in 2023, but were only against the language used by their southern colleagues.

This is as the Southern and Middle-Belt Alliance (SaMBA), has described as inflammatory, the resolution of the Northern Governors Forum (NGF) over power rotation, saying such statement was capable of fuelling secessionist agitations in the country.

The Northern Governors Forum, in a communiqué read by their chairman and Governor of Plateau State, Simon Lalong, after their emergency meeting, had said: “The Forum observed that some northern states governors had earlier expressed views for a power-shift to three Geo-Political Zone in the south to promote unity and peace in the nation.

“Notwithstanding their comments, the Forum unanimously condemn the statement by the Southern Governor’s Forum that the presidency must go to the south. The statement is quite contradictory with the provision of the Constitution of the Federal Republic of Nigeria (1999) as amended that the elected president shall:-score the majority votes; score at least 25% of the votes cast in 2/3 States of the Federation. In the case of run-up, simple majority wins the election.”

Unfortunately, the back and forth between governors of the two regions had elicited concerns as well as reactions from other stakeholders from both ends, suggesting obnoxious scenarios in the two regions.

But El-Rufai, on Tuesday night, attempted to clarify the resolution of the governors and said they were alarmed that their southern counterparts could use the word “must” in their agitation for power shift to the south after President Muhammadu Buhari’s tenure in 2023.

The North West governor stated that the word “must” was at variance with democracy, which was characterised by negotiations and horse-trading by parties involved, often out of the public glare.

According to him, he and some other northern governors had earlier called for a power shift in 2023 in their individual capacities to foster national unity and togetherness, adding that “he was called names by his people for making that call.”

El-Rufai, who made the clarifications in a media chat with select Kaduna-based broadcast journalists on Tuesday night, pointed out that the media misrepresented the resolution of the Northern Governors’ Forum meeting which held on Monday, on power shift.

Although he spoke in Hausa, the Kaduna governor reminded the south that, “The north has supported southern presidential aspirants in the past”, adding that they “supported Chief Olusegun Obasanjo’s aspiration in 1999 and his re-election in 2003.”

El-Rufai was of the view that their southern colleagues should have reached out to them on the issue of power shift instead of playing to the gallery.

Abdulsalami Abubakar cries over ‘war in Nigeria’, issues warning ahead of 2023 elections

Lesson From Buhari’s Visit To Tinubu: Why Osibanjo Should Be The Next President