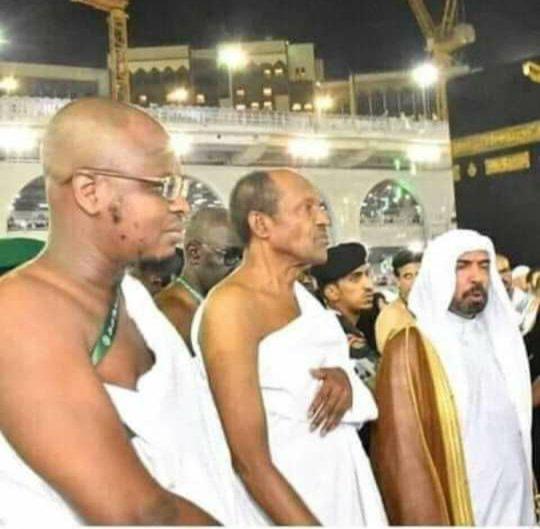 Pantami & His Master, Politically & Ideologically; And We Wonder Why Terrorism, Fulani's Banditry/Terrorism, Kidnappings Have All Found Homes In Nigeria. How Can & Why Should Buhari Fire The Terrorism Apologist? Do We Need To Look Further?

THREE THINGS CANNOT LONG BE HIDDEN: THE SUN, THE MOON, AND THE TRUTH-Confucius.
After Governor Godwin Obaseki of Edo finished and won the state’s gubernatorial battle in 2020, every other battle will be almost always surmountable, call it “akamu” case if you like. The switched-party governor is a product of “rofo rofo” fight. Fighting and subduing a relentless godfather and perpetual combatant as Comrade Adams Oshiohmole, Obaseki won’t even think twice about engaging anybody else, especially if it is in his familiar terrain.

If the Finance Minister Zainab Ahmed had known Governor Obaseki’s pedigree, she would have avoided drawing a fight with him over the alleged money printing by the Central Bank of Nigeria because Obaseki appears to be better armed for the battle. Taking on Governor Obaseki for exposing how cash-strapped the Federal Government has been was an unwise decision for Hajia Ahmed.

Governor Obaseki is hardly a talkative, but a strategic thinker. That’s why he was able to subdue a garrulous mentor who had thought that being vociferous or eloquent can substitute for strategy.

Governor Obaseki has a background in Economics. He is an investment banker and can smell danger in the economy from afar. He knows that Nigeria is in the doldrums regarding the national economy. He knows that the government and those piloting its affairs and the economy have been living in denial, refusing to interpret properly to the people the correct state of the nation’s economy.

Obaseki saw that as dangerous because such false images can make the people leave their belt loose when it should be tighter.

The governor being privy to the correct picture of things, given his investment background, would not want his people to fall prey. He decided to brief them painting a gory picture of Nigeria’s current economic status and the danger it portends.

After lamenting the quantum of borrowing the government was doing, the governor went further to underscore the grave danger arising therefrom. He regretted that the federal government appears to have no ideas of what to do or how to go about the situation and has resorted to printing more bank notes to survive. He then revealed that the government had to print between 50 to 60 billion to be able to find funds for states to share as federal allocation.
The revelation did not go down well with the Finance Minister who described the governor’s statement as untrue, misleading, and unfortunate. That minister’s remark will make the governor look like a liar, a profiling he wasn’t ready to take. Then he fired back at the minister, thereby opening the arena for the fight.

The CBN, the real culprit in the alleged money printing, found itself cornered. Denying Governor Obaseki would mean telling lies which could have far-reaching consequences for a regulator in such a critical sector. And denying the minister would once again be exposing the government as divided and incoherent. They had to come in-between the two. Yes, we printed money but for loans not for sharing, which sounds like saying, “We took away six, not half a dozen.”

Although the apex bank’s position is a half-truth, it is still better than outright denial. By this, the minister is also somehow protected. But the minister owes Nigerians the truth about the state of our economy. How much has been borrowed so far? Where are they deployed for investment? How have they been able to block the bleeding corruption in high places…revenue agencies like NNPC, FIRS, Nigerian Ports Authority and the Customs. What is the true position with petrol subsidy?

All said and done, Governor Obaseki should be commended for this patriotic exposé. Nigerians have been wondering the cause of the sudden jump in inflation. The price of virtually all goods skyrocketed overnight. One social media joker captured the inflation funnily, “I don’t understand what is happening again, my N100,000 suddenly started behaving like 10,000.” Those who went to market recently will understand what the joke is all about but that is the state of our economy today which is hidden from us.

We have found ourselves down the line where currency had to be printed for the government to find money to spend. Even during the war such voodoo economics was not practised. When money printing was popularized that we can recall was under the Ugandan maximum dictator late Idi Amin who was so bereft of ideas and was isolated from the people that he resorted to printing money to spend. We understand printing money to replace dirty notes.
God forbid that Nigeria has gotten so close to such danger where the government has run out of ideas and is now engaging persons skilled in voodooist ideas to run the economy.

If it’s the same staccato mentality with which we approach security issues that we bring to economic matters, the consequences will be hyper-disastrous, if there’s a word like that.

The National Security Adviser Major-General Babagana Monguno recently blew the lid off the missing billions meant for arms and ammunition and was short of fingering the immediate past service chiefs. Coming from NSA, the whistleblowing was a clear picture of a divided house and we are long taught that a divided house hardly stands.
Perhaps, even more intriguing is the disturbing trending facts that a sympathizer of terrorism, Dr Isa Pantami, is in the cabinet occupying a strategic position. Yet we go on searching for their sponsors when what we are looking for in faraway Sokoto is right in our Shokoto.

The terrorism lover-minister who was threatening to go to court against the media that exposed him has now done a U-turn, blaming his early show of love for terrorists to youthfulness. Only God knows how many lives were lost during his youthful exuberance.

Very regrettable that this man and his background passed through the security screening and the confirming Senate. However, that is what you get when a nation’s intelligence and parliamentary bodies are run on ethno-religious sentiments rather than the set best practices.

Pantami does not deserve to be a minister of a liberal democracy, still keeping him in the cabinet after his unveiling says a lot about the bigotry of the regime itself. In saner climes, he would resign like yesterday.

When this administration came to power, it anchored its future to Nigerians on three issues, security, corruption, and economy and six years down the line, the government has failed woefully in all the areas. Why? Because it has approached the three very important matters with narrow minds, putting square pegs in round holes and expecting results. Beclouded by nepotism, this government has ignored ideas that could have made the difference.

Nigeria as a country is lavishly blessed with egg heads in all fields whose input can turn things around for good but they are either from the wrong religion or tribe, the two variables that dictate appointments in this dispensation at the expense of merit and character.

What Governor Obaseki has done, possibly without knowing, is letting the cat out of the bag. What has come out very glaring in the altercation between the Governor, the minister and possibly the CBN governor Godwin Emefiele is the clear picture of where we are as a nation economically. But for Obaseki the CBN governor would not have admittedly said, “Nigeria is unfortunately in a very bad situation and I am not going to pretend about it.”

Attempting to defend and deny the truth has further strengthened it and a better picture of the situation brought it to the fore for all to see. Sooner or later, the same correct picture will come out regarding the hide-and-seek going over petrol subsidy and the curious attempt to refurbish a dead refinery at the exit end of the regime. Nigerians are no fools.

It took the NSA to reveal the arms procurement scandal. It has now taken Governor Obaseki to reveal the money printing strategy to cover up. In all, there are feeble denials to save face at the expense of truth. It will take another Obaseki if not now sooner to uncover the other hidden truths about what is going on in this government. Was it not Pantami’s attempt to bury his past by threatening the media house that brought out his tapes?

If not God, who would have known that the man in charge of the nation’s database, the National Identification Number, NIN, the Minister of Communication and Digital Economy, is a sympathizer of Boko Haram and terrorism. Before long, NIN database will be released and Muslim and Fulani figures will clearly show the agenda. Why not when the hired imported herdsmen may have been captured as Nigerians?

We have all followed frantic efforts Dr Pantami is making to disown his past. If he had done that before he was dug out, maybe it would have sufficed, but to do it because you are caught is incredulous.

What a country, no wonder one Nigeria is not negotiable to some and impossible to others. One thing, however, is obvious: We cannot forever hide the truth about ourselves, from ourselves. The fact is snow-white that Nigeria as currently structured is not working and cannot work.