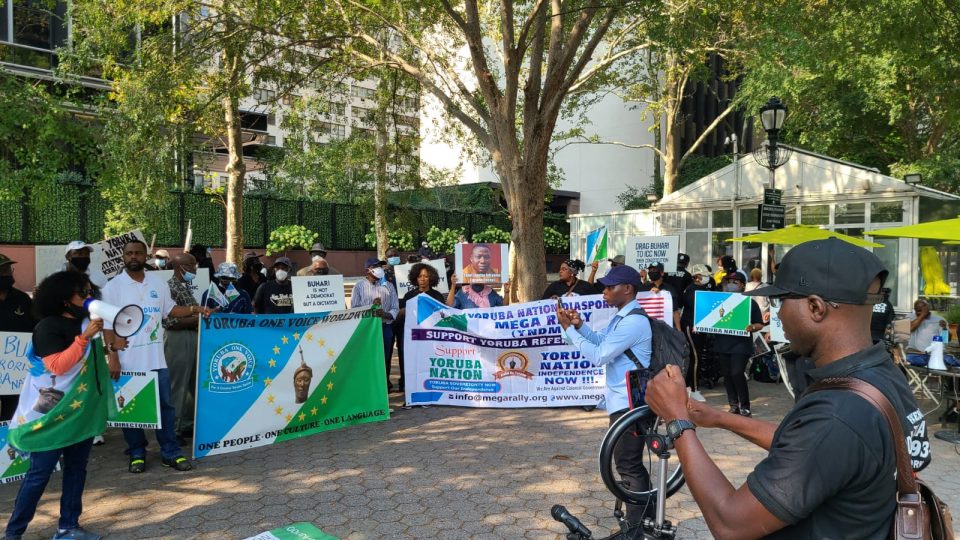 Yoruba Nation agitators, others at UN Assembly on Tuesday, September 14, 2021

The insight provided by this essay is intended to provide a backdrop to the mainly audiovisual NINAS Urgent Alert Series that began with the RUGA Alert and to guide the endangered non-Caliphate rest of Nigeria to the potent redemption pathway offered by the Joint Multi-Regional Constitutional Force Majeure activated December 16, 2020.

Just like the 2015 electoral cycle in Nigeria Became for the Fulani, an opportunity for activating the Fulani final push for conquest and conversion of Nigeria to a Fulani country, the 2023 electoral cycle holds the one and only key to actualization of the nearly-completed Fulani conquest mission over Nigeria.

On the one hand and unfortunately for the invaders, it is ONLY if the rest of Nigeria allow the voyage to 2023 Elections to continue beyond the first half of 2022 that the Caliphate will have an opportunity to advance its conquest mission beyond where it currently is.

On the other hand, halting the voyage to 2023 Elections IMMEDIATELY opens up the escape route and Sovereignty Recovery Plan offered to the rest of Nigeria by the NINAS Constitutional Force Majeure. (NINAS is the Nigerian Indigenous Nationalities Alliance for Self-determination)

It follows therefore that the decision by the rest of Nigeria, particularly the South and Middle-Belt, to PROCEED WITH or HALT the voyage to 2023 Elections, will determine WHETHER  the Caliphate will succeed in its conquest and colonization plan with the mass killings that will accompany it, OR the rest of Nigeria will triumph in the push to Take Down the Caliphate-imposed Unitary Constitution of Nigeria 1999 and therefore retrieve their Sovereignty from the bondage of Unitary Nigeria, saving themselves therefore from the mass killings already looming against them.

These are perilous times for indigenous peoples, and the dangers that the Caliphate have brought upon them have been explained (together with their remedy) in our video Communiqués.

(Here is the link to the last four of the NINAS Urgent Alerts as issued on April 7, 2022.)

The Federation of Nigeria died since 1966. Guided and massively aided by the British, the Fulani who forcefully seized and operated the carcass of the dead Federation of Nigeria since 1967 as the Federal Republic of Nigeria, found ingenious ways to legitimize their stranglehold using several Military Decrees by which they radically transformed the defunct Federation of Nigeria to a tightly controlled and heavily centralized Unitary State. Specifically, the four-Region structure of Nigeria was, between 1966 and 1999, fractured into a 36-State structure, compounded in the same period by an arbitrarily imposed 774 Local Government structure which now operates as a tier of Government in further negation of an important Federation principle in which Local Governments are in the exclusive jurisdiction of the Federating Units.

The danger many of our people are not seeing clearly, is that the Caliphate which has totally strangulated the Federating Units is now on a sweeping ethnic cleansing campaign to wipe off the indigenous peoples of Nigeria, as part of a wider scheme of transforming Nigeria into a Fulani Country.

Having secured by a combination of brutal force and guile, effective control of all institutions of the Nigerian State across all arms of Government, covering Military infrastructure and key economic infrastructure and powers, the Caliphate went into a campaign of violently seizing absolute political control of Nigeria as a strategy for converting the defunct Federation of Nigeria into a Fulani country. (This is what has been loosely described as the FULANIZATION Agenda by those who know only aspects of what is unfolding).

Buhari had for many years been a champion of this Fulani Agenda but the electoral cycle of Elections of 2015 which was Buhari’s fourth attempt at the Presidency of Nigeria presented an opportunity for the rapid advancement of the long-standing British-backed Fulani Agenda in Nigeria which dates back to the 1914 Amalgamation and which manifested itself in the Lancaster House Meetings of 1959, the hollow Independence of 1960, the Constitutional Disruption of May 29, 1962 against the Western Region, the Military coup of January 15, 1966, the revenge coup of July 29 1966, the Union Distress discussions and altercations of September 1966 to April 1967 including Aburi of January 1967,  the Decreed deep structural alterations of May 27, 1967, the War with Eastern Region between July 1967 and January 1970, the post-War expropriations and punitive policies that were surreptitiously expanded and configured into constitutional provisions and directive principles of State Policies to ease the full Unitarization of Nigeria and set the ground for Full FULANIZATION of Nigeria.

It is clear from all that is now known about the constitutional basis of our bondage that the choice of anyone from the South and Middle-Belt to bid for power under a Constitution that confiscates our Sovereignties and Freedoms, is a choice to remain in bondage and be in danger of extermination (for permanent Fulani land grabbing).

Let it be clear to those from the South and Middle-Belt currently leading that bid for political power under the current Unitary Constitution of 1999, that they endanger the rest of the populace, and this will include the aspirants and candidates for elections; promoters and supporters of political parties; Church leaders preaching “get your PVC!” and mobilizing the participation and support of the populace for the 2023 Elections, and encouraging their chosen political gladiators.

Let it also be known that when the Fulani killings and onslaught being enabled by the distractions of the already doomed 2023 Elections get closer to our spaces, all of the groups listed above as supporting the 2023 voyage of death for the South and Middle-Belt will be treated and held accountable for their roles in leading their own people to death, ruin, landlessness and utter damnation. The plea of ignorance will not avail and that is the chief purpose of this Easter Redemption Essay.

Therefore, please do visit the NINAS website to review the materials behind the aforementioned redemption plan including the full text of the December 16, 2020, Constitutional Force Majeure Proclamation, and access the audiovisual materials of the NINAS Campaign (via the NINAS YouTube channel link on the website).

If there were any doubts about the Fulani conquest designs, or the Involvement of the Buhari-led “Federal Government of Nigeria” and its Fulani-controlled Military in that murderous campaign, the demands of the terrorists currently holding passengers abducted from the Abuja-Kaduna April 2022 train attack, and the incoherent response so far by the Buhari-led Federal Government have completely cleared out such doubts.