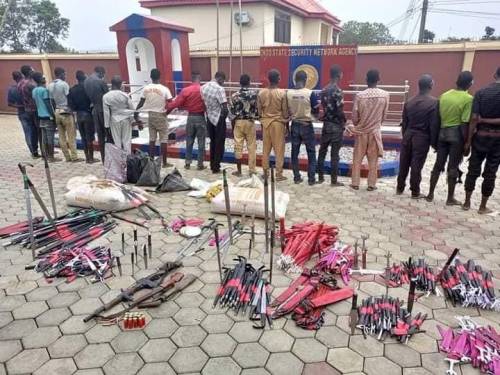 The Time Is Now For State Police

Also, 18 people suspected to be bandits who were in the vehicle were arrested while some others escaped.

Ondo State operatives of the Western Nigeria Security Network popularly known as Amotekun have intercepted a bus loaded with 500 pieces of dagger which were concealed under the seats of the vehicles the suspects were traveling in.

They also recovered different seizes of knives and guns hidden inside Tigernut bags.

Also, 18 people suspected to be bandits who were in the vehicle were arrested while others escaped.

Parading the suspects before journalists in Akure, the state Commander of Amotekun Corps, Adetunji Adeleye said the three buses escaped from different checkpoints before they were intercepted in Ondo town.

Meanwhile, Governor Rotimi Akeredolu had commended Amotekun Corps operatives for filling the vacuum left by military men in the state.

The Nigerian Army personnel had abandoned checkpoints in the state for allegedly being owed allowances by the state government.

In a statement on Thursday on his Facebook page, the governor said, “Amotekun Corps is now engaging in road patrol to further ensure the security of lives and property of all residents across the state.”

One wonders what the Nigerian police are doing in securing the lives and properties of the citizens of Nigeria, the south west in this respect.

What was the reason the federal government under General Buhari was vehemently against the establishment of this security outfit?

Was it to allow the freedom of movements of these terrorists code named BANDITS?

Isn’t it quite obvious that the Nigerian police are either unwilling, and or, unable to secure the lives and properties of the southwest states, for whatever reasons?

Why do must Ondo state citizens depend on only the Nigerian Army to man the checkpoints which they eventually abandoned under the guise of being allegedly owed allowances by the Ondo State government?

Or is it possible that the Nigerian army unit in Ondo state was in the know that there were going to be such movements of weapons by these terrorist, that they had to come up with an excuse?

The time has passed for the establishment of state police across Nigeria, therefore, I implore the southwest governors and federal representatives to make a serious push for this as it is very obvious that this federal nonsense (policing) is not working and the way Nigeria is configured, it will never work.

In the meantime, the Amotekun security outfit should be given more power to carry superior firearm and the power to prosecute criminals. It makes no sense handing over suspects they arrest to a police that may be in cahoots with a government that may have an agenda, now or in future.

Let Us Make Nigeria Work For All!!!

VAT AS A CATALYST

The battle for Nigeria’s judiciary ‘soul’.

To Know The Status of A Country’s Covid Conditions, Check This Out