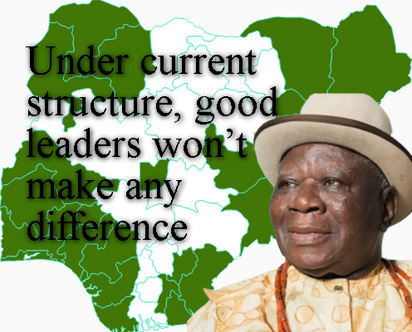 It is amazing that adult men/women, historians and constitutional lawyers ALL put their brains in PARK for the better part of 50years. Obafemi Awolowo,
E K Clark, Phillip Adiodu, Allison Ayida and many others had all that it would have taken to return postwar Nigeria to the original Constitutional Order in matters of Revenue Allocation as early as February 10, 1970. We have been suffering from the collateral consequences of that delay. That’s how the Niger Delta militancy was spawned.

Having defeated #Biafra, there was no reason why it would come back into the equation if only the correct policies were consistently pursued. The Arewa northern Islamist oligarchy, aided by fifth columnists in the Niger Delta interested only in their pockets and Om’Odua leadership driving into the future while firmly looking at their feet, failed to confront the glaring inequities. Then after all these years, the chicken has come home to roost.
A patently bad political/economic system cannot miraculously be fantastic for ethnic nationalities outside of Igboland. The human blight in Nigeria’s north seems nothing short of karmic. All the neighbours of Alaigbo to the North, West, South and East are in turmoil. Would that the deliberate Nigerian political architecture achieves happy acceptance and the necessary positive outcomes in all these places. By induction Alaigbo would be peaceful and prosperous, a lot more than today.
If Odualand gets all that is rightly hers, the temperature of frustration, envy and resentment would drop drastically AND NDIGBO WOULD BENEFIT, both on the road and at home.

IF you free the Eastern and Niger Delta seaports from systemic institutional undermining, Ndigbo would benefit even more than the people of Bayelsa, Rivers, Akwa Ibom and Cross River States. The quality of life for those who choose to live in the Lagos/Ogun axis would drastically improve, reduced congestion being only one visible metric.

Go back to 1963 Revenue Allocation Formula, and see how with 50% Allocation the Niger Delta states will launch such huge developments strides that they cannot hope to implement without the involvement of SE professionals. Decisions will be made locally in Yenagoa, Asaba, Warri, Benin, Port Harcourt, Uyo and Calabar. Does anyone still need for me to keep spelling this out?: That the “selfish”(?) interest of the O’Odua and South-South states perfectly align with us in the South-East. Sadly many, including governors in the thick of things, are so slow to come around. They have until very recently been coyly skirting around these issues.
Yes, apart from this new VAT palaver brought firmly to the front-burner by Gov Nyesom Wike, can Lagos Governor Sanwo-Olu with Ambode and Fashola before him advise us about the NEW FACTS behind this newfound combativeness? . They need to pursue this new tack with profuse apologies to the masses for opportunities deliberately lost.

Then again Sanwo-Olu, picking up the baton from Ambode exudes such a sorry ambivalence towards the constitutional issues at hand by going back to the plea over SPECIAL STATUS FOR LAGOS. Hear him:

When will the leading lights(?) of the Lagos political firmament make up their minds and seek to benefit from their huge intellectual endowments?
I am so tired of this pussyfooting. If not Lagos, who?

ARE WE READY, AS YOUTHS, TO BE THE CHANGE AGENTS?