The brawl between the Minister of State, Labour and Employment, Festus Kayamo and Nigerian singer, Eedris Abdulkareem can be traced to the singer’s release of ‘Jagajaga Reloaded’, featuring Modarocker and Mr. Raw. 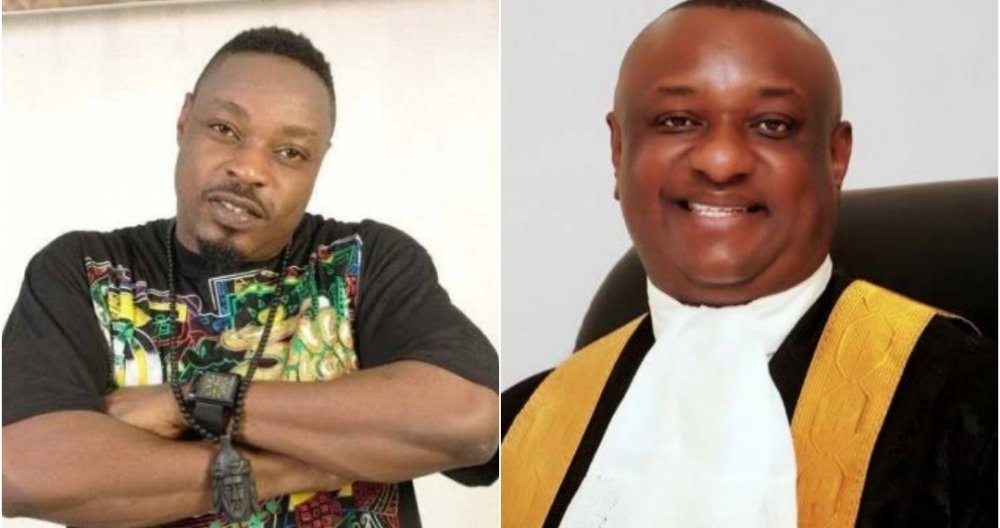 The veteran singer got banned from playing on the radio and also from performing in events and live concerts when he dropped the first version of the song in 2004.

In the four-minute song, Eedris condemns the corrupt practices of the Nigerian government, police brutality, the worsening living conditions in the country and also cited the shootings that happened in Lekki Tollgate on October 20, 2020, during the EndSARS protest.

In a lengthy rant on Twitter, Keyamo said, “Eedris Abdulkareem just released a song, ‘jagajaga reloaded’, where he waxed the following lyrics, “I laughed out so loud and even danced to the rhythm too. But there’s a small story behind this poor attempt at blackmail.”

Keyamo, who was agitated by “the singer’s ‘poor attempt at blackmail’ revealed how Eedris was eager to join President Buhari’s camp for a price in 2018 and how he begged for N1.3 million.

The minister backed his claims with screenshots of text message exchanges between himself and the rapper which he shared in a series of posts on his verified social media handles.

There were reports in 2018, that Kayemo accused Eedris of blackmailing him in his then new song titled, Jagajaga Reloaded’ because he refused to give him money in 2018 to campaign for President Muhammadu Buhari.

Reacting to Kayemo revelation, Eedris took to his Instagram page and said in 2018, he looked up to Keyamo as a brother and a comrade who loved Nigeria and demanded money because his mother was dying, and that he stood with Keyamo when he was in jail and also fought the then President Olusegun Obasanjo on behalf of the comrades who were in prison.

Eedris tagged him a cabal member and added that “Keyamo is in pains because his next ambition is to be governor of Delta State.”

He wrote, “Did Festus Keyamo join the cabal or not? When he was in prison, I stood by him, I fought Obasanjo on behalf of all the comrades in prison, I released Jagajaga.

“When my mother was dying, I reached out to a brother, or the one I thought was a brother and a comrade. Could he have helped? Yes, did he help? No. Such was the wickedness of Keyamo’s heart that he munched and kept personal details for three years. Real Hallmark of a Blackmailer!

“In 2018, I still thought the man was a comrade who could effect a change in the government he served. Then he joined the cabal, he became an inner caucus and held the steering wheel spiralling Nigeria into doom.

“He joined to crush the revolution of the youths, he joined the cabal. The cabal which mowed down our youths at LEKKI TOLL GATE.

“The Blackmailer said I recorded a song for Buhari. The said song is titled: “Obasanjo Write Buhari Letter”. Below is the YouTube link to that song, listen and you will phantom the deviousness and dubiousness of the evil SAN (Senior Advocate Blackmailer of Nigeria) called Festus Keyamo, ” Eedris said.

The musician went ahead to admonish Nigerians not to be threatened but to keep asking questions about the state of the nation.

Intel – Lagos under surveillance by terrorists