‘I don’t believe these times’: Track legend not buying it after world record destroyed 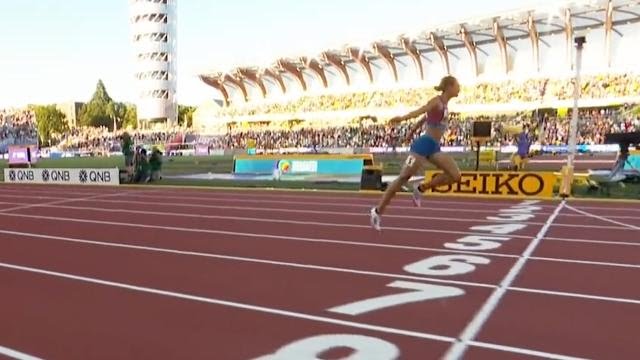 Nigeria’s Tobi Amusan set a new world record in the women’s 100m hurdles at the World Athletics championships in Eugene on Monday — but it sparked plenty of debate.

In the first track event of the final session of the 10th day of competition, Amusan streaked to a winning time of 12.12 seconds in the first of three semi-finals.

It smashed the previous best of 12.20sec set by American Kendra Harrison in 2016. Harrison was also in the first semi-final, finishing second in 12.27sec.

The previous championship record was 12.28sec set by Australian Sally Pearson in Daegu in 2011.

Amusan had set an African record of 12.40sec on Sunday to win her heat, the fastest first-round time in world championships history.

“I wanted to get out and go,” said the 25-year-old Nigerian. “I did what I had to do. Now I’m looking forward to the finals.”

However, there was some debate around the accuracy of the stopwatch in Oregon after a series of sizzling times — including personal bests and national records — were set.

Legendary American sprinter Michael Johnson, who won four Olympic gold medals during his decorated career, cast doubt on the legitimacy of the times being recorded in the 100m hurdles, suggesting something was amiss.

Speaking on the BBC, Johnson added: “I don’t believe these times, let’s look at the racing.”

Five of the eight runners in Amusan’s semi-final ran their fastest ever times, sparking incredulity within the athletics world.

Despite Johnson’s concerns, Amusan’s new world record will stand. Joining her and Harrison in the final will be Olympic champion Jasmine Camacho-Quinn of Puerto Rico, the Jamaican pair of Britany Anderson and 2015 world champion Danielle Williams, American Alia Armstrong, Devynne Charlton of the Bahamas and Brit Cindy Sember.

‘That is ridiculous’: World records tumble as in ‘extraordinary’ scenes at World Athletics Championships

Nigeria’s Tobi Amusan and Sweden’s Armand Duplantis both broke world records in a stunning finish to the 2022 World Athletic Championships in Eugene, Oregon.

Starting off with Amusan, she demolished the world record in the women’s 100m hurdles TWICE in back-to-back races, though excessive wind speeds meant her second time was subsequently ruled out.

In the final session, Amusan delivered one of the great individual performances of the tournament – if not athletics history.

First, she won her semi-final in 12.12 seconds, crushing the previous best of 12.20s owned by American Kendra Harrison in 2016.

Then, Amusen blew away her rivals in the final to win the gold medal – her country’s first ever – in a staggering 12.06s.

However, it was revealed five minutes later that the wind reading for the final was +2.5m/s, well over the 2m per second limit, meaning the second run does not count as a world record.

Commentator Tim Hutchings was in awe as he exclaimed: “I cannot believe it, she’s done it again. Two world records in one night and she makes history by becoming Nigeria’s first world champion. What a way to do it and what a stage on which to discover sporting immortality. Records can be broken, titles will stand the test of time and tonight she’s done both – two world records. 12.06, tonight will never, never be forgotten by anyone lucky enough to be here.

“That was utterly extraordinary. We doubted she could do it again, how dare we, how dare we. Nigeria, a proud African nation, are on top of the world tonight. And Amusan has delivered an evening of unprecedented glory and speed. That was utterly, utterly incredible.”

Amusan had already crushed the African record when she won her heat the day before in just 12.40s, the fastest first-round time in world championships history. But she went to another level in the finals to demolish her rivals – despite having the third-slowest reaction time of any runner in the final.

Former world record holder Harrison was runner-up in the same semi-final where Amusan first broke the record, finishing second in 12.27s. Remarkably, that time was already faster than the previous championship record of 12.28sec, which Australian Sally Pearson claimed in 2011.Tobi Amusan reacts after her stunning display.

“Tobi Amusan has just electrified the stadium. It was an incredible run but we didn’t think it was that good. How on earth does she focus on winning the gold medal after storming to a world record. Utterly astonishing.”

Gail Devers added: “Yesterday when she ran her first heat, she was saying it was so hard for her to slow down because people were wondering why she ran 12.40. But when you’re on fire it is hard to slow down. She didn’t expect to run the 12.12 but you saw her mechanics, she kept running. What she did so well is she got her lead leg down and she ran away. That was a clinic in how you run the 100-metre hurdles.”

In that same race, Australia’s Michelle Jenneke smashed her previous best of 12.82s by finishing fifth in 12.66s, though it was not good enough to qualify for the final.

In her heat, she had already run her fastest time in seven years – since 2015, the same year as her previous PB. But she went one better in the semi-final to demolish her best-ever time, and was clearly overjoyed.Michelle Jenneke of Team Australia reacts after competing in the Women’s 100m Hurdles.

As for Duplantis, the 22-year-old completed his medal collection as he dominated the pole vault for world gold in a new world record.

Olympic champion Duplantis, seeking an elusive first world title, triumphed with a best of 6.21 metres, bettering by 1cm his previous best set when winning gold at the World Indoor Championships in Belgrade in March.

American Chris Nilsen took silver with a bet of 5.94m on countback from Ernest Obiang, whose bronze was a first world medal of any colour for the Philippines

“That’s ridiculous. That is absolutely ridiculous,” Hutchings said in commentary.

“How could we finish any other way than with a world record from the greatest pole vaulter our sport has ever seen. He cannot believe it. You could not script that any better. USA storming to the last track gold with Sydney McLaughlin who smashed her own record in blistering fashion and then just when you thought it was all over, Duplantis as he did at the world indoors, finishes the action with a moment of unprecedented greatness.Armand Duplantis poses with his world record.

“Duplantis has taken his world record ever higher, his achievements go ever further and the only question is how many more times will he seize these wonderful nights and sign off in his inimitable style. At 22, he has already done everything and look at what it means.”

Duplantis celebrated the record with a backflip as he brought an end to the day’s events in emphatic fashion.

“Tonight has had absolutely everything,” he said.

“We have never had more nations striking gold at the same world championship as we had here, the previous best was 26, we are already up to 28. Tonight, we have seen the two fastest times over the 100-metre hurdles.

“One of them was world-record legitimate and one wasn’t because of the wind and we’ve seen Duplantis become the most prolific six-metre jumper in history and break his own record. What a night for so many reasons.”

This ignorantly arrogant American athletes, it’s always something whenever another country from the “developing countries” trounce them. They are not just bad lovers, but jealous losers for whatever reasons……., it reminds me of one Carl Lewis and his American ilks…..

MUST THERE ALWAYS BE A CONTROVERSY AROUND NIGERIA’S GREAT ACHIEVEMENTS WHERE THERE IS NONE? WE ARE NOT FOOLED!

IF ONLY NIGERIA KNOWS WHO SHE IS….

Why Chief M.K.O Abiola Was Killed