BREAKING NEWS
GMT+2 09:51
Home News Who is David Oluwale, how did he die and what happened to the blue Leeds Bridge plaque displayed in memory of David Oluwale? 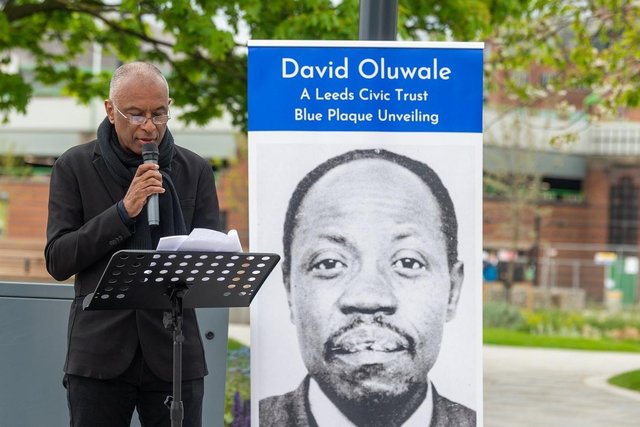 The unveiling of a Blue Plaque in Leeds, on Leeds Bridge in memory of British Nigerian David Oluwale. (Pic credit: James Hardisty)

Who is David Oluwale, how did he die and what happened to the blue Leeds Bridge plaque displayed in memory of David Oluwale?

The blue Leeds Bridge plaque was erected in memory of David Oluwale on Monday, April 25 – here is everything you need to know about him.

David Oluwale was a British Nigerian man whose death led to the first successful prosecution of British police officers for the involvement in the death of a Black person.

The exact events leading up to Mr Oluwale’s death, in April 1969, have never been fully confirmed. However, two independent witnesses claimed to have seen uniformed police officers chasing after him alongside River Aire on the night he is thought to have died.

Mr Oluwale was born in Lagos, Nigeria, in 1930 and in August 1949, he hid on board SS Temple Bar, a cargo ship headed for Hull. When the ship arrived in Hull on September 3, 1949, he was handed to authorities.

Under the British Nationality Act 1948, Mr Oluwale was considered a British citizen, but he was charged as a stowaway under the Merchant Shipping Act. He was sentenced to 28 days’ imprisonment.

After he was released from prison on October 3, 1949, Mr Oluwale, who used to serve an apprenticeship as a tailor in Nigeria, travelled to Leeds and during the last two years of his life, was left homeless in Leeds City Centre.

Throughout his life in the UK he was targeted by the police due to his mental health, homelessness and race, before his death in 1969.

According to a whistleblower, who worked with Leeds City Police at the time, he was repeatedly psychologically and physically abused by two police officers.

How did David Oluwale die?

In the early hours of April 17, 1969, police officer Ken Kitching found Mr Oluwale sleeping in a shop doorway and after alerting his colleague Geoff Ellerker, they both beat Mr Oluwale with their truncheons and witnesses reported seeing Mr Oluwale running away from the officers towards the River Aire.

This is where his body was found in the river section between Knotstrop Weir and Skelton Grange Power Station, two weeks later on May 4. He was buried in a pauper’s grave. No suspicious circumstances were attached to his death at the time.

30 years later, the Oluwale case returned to the public eye following the publication Nationality: Wog, The Hounding of David Oluwale by Kester Aspden in 2007. This was adapted and made into a critically acclaimed stage play which was performed at the West Yorkshire Playhouse in February 2009.

The plaque followed the dedication of a new bridge, now named the David Oluwale bridge, which was recently lowered into place across the River Aire.

It was unveiled on April 25, 2022, at 5pm during a special ceremony organised by Leeds Civic Trust and just a few hours later was stolen.

This morning (April 26) Leeds Civic Trust tweeted: “We are aware of the abhorrent and cowardly theft and removal of David Oluwale’s blue plaque overnight, just a few hours after its unveiling.

“The people responsible bring shame on our city and we will not be deterred from commemorating David’s life and legacy.”

ON IGBOHO’S STYLE & SUBSTANCE: My Apologies To Baba Adeboye