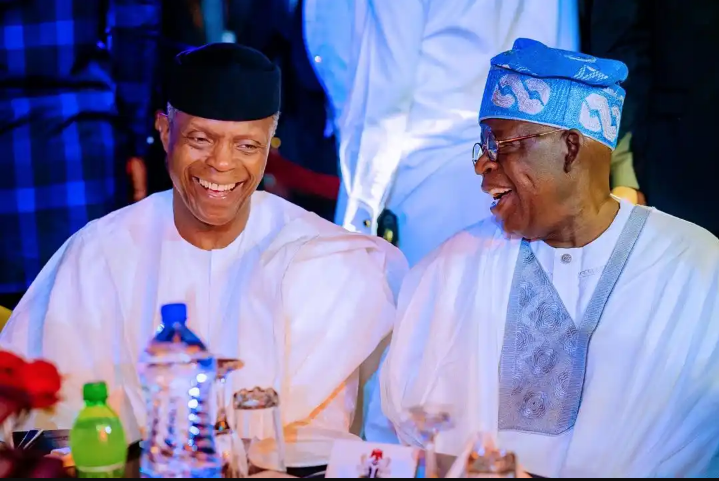 To say that the much anticipated declaration of VP Yemi Osinbajo’s running as a presidential candidate under the APC umbrella has lit up the social media space, as someone put it, it has created an internet standstill. Here are some of the reactions to his announcement;

The Gloves Are Off,

In all fairness, VP Osinbajo is a sellable APC candidate despite and in spite of Buhari. His declaration speech is as expected, politically. You cannot insult or throw shades at the person you want to succeed. He is not as tainted as the rest. I judge him with his record during Buhari’s illness. I believe he showed that he was a person of fairness. He sacked Daura and installed the person who was next in line and not necessarily his candidate. He also brought back the Naira from a free fall from 510 to $1 back to 370. Also there is the case of Onoghen. He has had enough experience to understand the Nigerian “cowboy antics” in the presidency. He is a smart and forward thinking individual whom I think will do his best to move Nigeria forward. He must have the balls to restructure Nigeria to true fiscal federalism. Whether he calls it restructuring or use other term/nomenclature, it needs to be done for Nigeria to move forward. He also must remove the Federal bottlenecks for states and LGA’s to develop and generate power. I am confident that he will get good hands and not just the unqualified riff-raff we have today. He must be advised to give contracts and not positions to political jobbers. The contracts must also be monitored and accordingly executed. Nigeria has a lot of problems which having the right persons heading the right agencies will help to steer her on the road to recovery. We do not necessarily need to be a member of the Pentecostal or belong to any political party before we offer balanced views on topical national issues. I wish him well and wish Nigeria Goodluck! no pun intended. We have no other home. May God bless and prosper Nigeria 🇳🇬

It is incontrovertible that Yemi Osinbajo is between the devil and the deep-blue sea, in that the government he has served in as Vice-President has failed on all indices of development.

BUT only the most unrepentantly critical will fail to notice that in the early days of the administration, when Buhari formally handed over to Osinbajo on his trips abroad, there was progress.

And that this Vice-President was thereafter sidelined.

Similarly, only the wilfully critical will fail to see that Osinbajo will do a far better job than Buhari for one and one reason only, President Buhari is not sufficiently, formally or informally, educated for the task of building a country with the sort of internal contradictions Nigeria has, into a modern nation.

But this cannot be said of Osinbajo. He will make an infinitely better President than Buhari.

The difference between king and king maker is best illustrated by the golden rule of politics– whoever has the gold, makes the rule.

In today’s Nigeria, the person with the gold is Buhari. Whoever he throws his weight behind is miles ahead of any other candidate.

Yes, money can do a lot; but power trumps money 90% of the time, if the person with the power has the requisite skill at deploying the power.

Poverty in Nigeria makes most Nigerians afraid, so they quickly roll over to be on the side where their feeding bottle gets milk supply, unless of course the status quo is up against a tsunami of opposition.

Eventually, Tinubu would be content with being the King Maker in Chief of Nigeria politics.

Two key factors that makes the V.P very appealing to the north.

One is that it settles the possibility of Muslim south- Christian north ticket, which the north finds unnerving. In the south, we are more secular in terms of public office.

Some of us would have a so what reaction when we are reminded, actually informed not reminded is more apt, that Tinubu, Fashola, Gbaja etc., are Muslims. Really, we would add. 😱😱

However, our northern brothers have a sort of different litmus test for their Christian brethren from the north when the chips are down, if you know what I mean.

Two, it provides possibility for a one term for a PYO if PMB resigns at any time before May 28 next year leaving the v.p to complete his term.

Note that even if PMB resigns 48 hours before expiration of this term, the v.p. would serve out the remaining 48 hours which satisfies legal definition of completion of term, and triggers the additional one term only provision.

In such a case, the north could seek to have the presidency go back to it come 2027. Why? Because to a carpenter, the solution to every problem requires a hammer. Now, substitute power for hammer. Power for power sake.

In my opinion, I think either of the two, v.p. or BAT, would do better than PMB, but ultimately, due to the structural flaws of the Nigerian state, neither one can get Nigeria moving at the speed needed to take us out of the doldrums we are in especially with the level of insecurity, getting closer and closer by the day to a tipping point at which anarchy replaces order and the country implodes.

The only solution is regional self governance for each of the six (6) geopolitical zones.

Anything short of that is just window dressing, when the roof is leaking during raining season.

Almost immediately Osinbajo declared, Tinubu quickly went and met with APC governors, about 15 of them. When asked if he had heard that one of his son had joined the presidential race, Tinubu replied by saying “I have no son grown enough to declare”, a statement many say is childish.