Operatives of Ondo State Security Network codenamed Amotekun Corps and soldiers from the 32 Artillery Brigade on Tuesday evening clashed over the seizure of over 100 cows by the operatives of the state’s security network for violating the state’s anti-grazing law following a tip off from some farmers.

The soldiers, according to sources  stormed the area and prevented the cows from being taken away by the operatives of Amotekun.

One of the sources said that the soldiers,  claimed that the cows belong to their officers in the barracks. 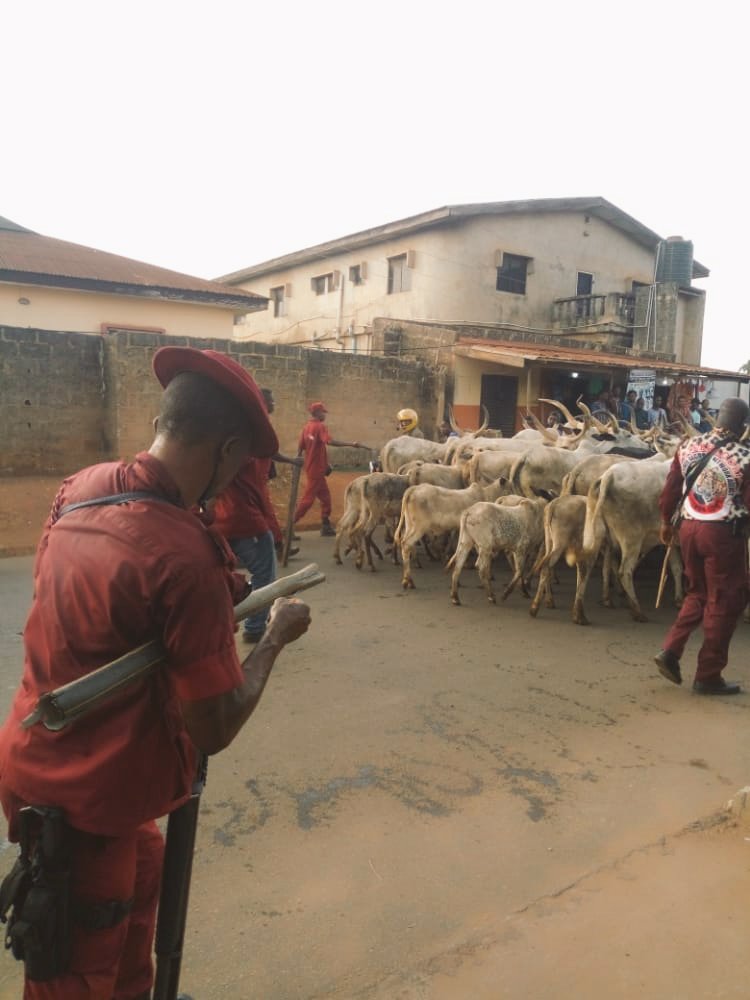 Two operatives of the Amotekun personnel were said to have been taken away by the soldiers after the sporadic shooting and assault on the Amotekun operatives.

According to the source: “As the Amotekun personnel was marching the arrested cows to their office at Alagbaka area of the state, soldiers numbering about ten stormed the area with Hilux vehicle and prevented the arrest of the cows.

“The soldiers insisted that the Amotekun men would not go away with the cows because they belonged to their officers from the military barrack”.

Reacting to the incident, the state Commander of Amotekun, Chief Adetunji Adeleye described the incident as a disagreement between the officers of the two security outfits.

Adeleye said that it had been resolved amicably adding that “it was the arrested herders that hid under the soldiers to cause misunderstanding between the security outfits. I can confirm to you that the cows have been released to us”

In their reaction to this madness by the soldiers whose commander in chief is General Buhari, the Human Rights Writers Association of Nigeria, HURIWA, has cried out over the deployment of soldiers to protect cows belonging to Fulani in Ondo State.

The human rights advocacy group lamented that these soldiers should ordinarily be sent to confront terrorists who are on rampage in Kaduna State.

HURIWA made the observation in a statement on Wednesday by its National Coordinator, Comrade Emmanuel Onwubiko.

The group said that it was a blatant misplacement of priority the military deployment of soldiers in the entire Southern region of the country to protect Fulani and their animals.

For this reason, HURIWA called on the military authorities to, without further delay, recall a sizable percentage of troops posted to Southern Nigeria.

HURIWA said these soldiers should instead be redeployed to Kaduna to fight terrorists since Governor Nasir el-Rufai and other top leaders, including a spokesman to the President, Femi Adesina, have identified the North West as a war zone.

HURIWA wondered why men of the 32 Artillery Brigade of the Nigeria Army, Akure, are in Ondo and why they are demanding the release of cows seized from Fulani herders by the Ondo State Security Network Agency also known as Amotekun Corps.

The cows were said to have been seized for violating the state anti-open grazing law.

HURIWA said the deployment of soldiers in relatively peaceful Southern states was a misplacement of priority.

Onwubiko said, “It is an established fact that Kaduna State is a war zone going by the carnage committed by terrorists in the last two weeks, especially and going by the description of el-Rufai; as well as presidential spokesman, Femi Adesina.

“The onslaught by audacious terrorists is unprecedented in the entire North-West and akin to the Boko Haram/ISWAP ferocious attacks in the North-East.

“However, instead of deploying most of its men to the theatre of war to stamp out terrorists overrunning Kaduna State who are having a field day, the Nigerian Army, sadly, is more concerned about the safety of trespassing cows than the thousands of innocent Nigerians killed by insurgents in Kaduna State month in, month out. This is most unfortunate,” HURIWA said.

HURIWA accused the President Muhammadu Buhari Federal Government of allegedly elevating cows to a sacred position far above the sanctity of life in its seven years.

“HURIWA urges the service chiefs to face reality and put away ethnic sentiments. Kaduna needs all the soldiers that the military can muster now. War, aside weapon sophistry, is also about numerical strength,” the group added.

El Rufai does not need to bring in mercenaries, Nigeria has their sponsors in government, they are called BANDITS, we therefore do not need anymore of these blood sucking savages.

Why Buhari is More Loyal to Niger Republic Than Nigeria