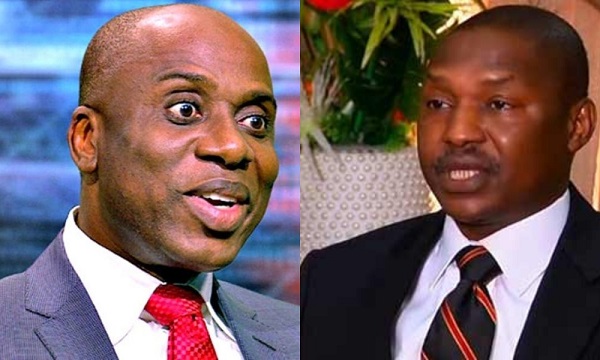 A Nigerian Court Gives Reprieve To Malami, Amaechi, others as it voids Section 84(12) of Electoral Act; Ebun-Olu Adegboruwa, SAN Responds

POLITICAL appointees on Friday got the nod to vote as delegates or be voted for at their party’s convention or congress after a Federal High Court sitting in Umuahia, Abia State voided Section 84 (12) of the Electoral Act.

Justice Evelyn Anyadike ordered the Attorney General of the Federation to delete the section from the Electoral Act forthwith.

And the AGF and Justice Minister Abubakar Malami (SAN), who is one of the people believed to a major beneficiary of the Section, promised on Friday night that the judgment will be executed without delay.

The ruling came 10 days after the Senate rejected a bill to amend the section as earlier requested by President Muhammadu Buhari.

The section stipulates that “No political appointee at any level shall be a voting delegate or be voted for at the convention or congress of any political party for the purpose of the nomination of candidates for any election.”

Justice Anyadike, ruling yesterday in a suit filed by a lawyer in Abia State, Nduka Edede, said the section ought to be struck down as it cannot stand when it is in violation of the clear provisions of the Constitution.

The court said any other law requiring such appointees to resign or leave office at any time other than what the constitution stipulates is unconstitutional and invalid.

Judgment of the Federal High Court, Umuahia, “nullifying” section 84(12) of the Electoral Act:

In his response to the judgement, Mr. Ebun-Olu Adegboruwa, SAN wrote;

May the judiciary (lawyers and judges) not destroy Nigeria in our lifetime.

The Electoral Act is an act of the National Assembly. How can you “nullify” an Act without joining the institution that made the Act, so that they can be heard concerning what they did?

When a defendant (Federal Government) rejoices over a judgment delivered against it as a party, then you know there is problem in Nigeria.

Let the National Assembly, the political parties and NGOS appeal against the judgment as interested parties.

Why do you want to hold on to your office as a political appointee and at the same time be a candidate in an election?

May Nigeria not happen to us in this way.

A concerned Nigerian also wrote and I quote;

“I never knew that it was possible to go to Court and get a ruling to amend the Nation’s Supreme law, the Nigerian Constitution, as Abubakar Malami did. If this is the case, why do we bother to get the National Assembly to undertake the tedious and often very expensive route of Constitutional Amendment process? It’s obviously much easier to go to Court and procure, to put it mildly, court judgments to amend the parts of constitution that we disagree with. As has been demonstrated, it won’t matter if it is for selfish reasons because we are an interested party or the beneficiary of the amendment sought. When will this country, especially our Judiciary, stop being a manifest joke?

In saner climates, the only constitutionally- impactful court rulings are those of the Supreme Court or Constitutional Courts, where they exist, and it is usually regarding the interpretations of the Country’s constitution, not its amendment. The process for constitutional amendment is set out in the constitution itself.

The National Assembly should appeal this case, even for posterity.”

The god-trepreneurs (an interesting piece)