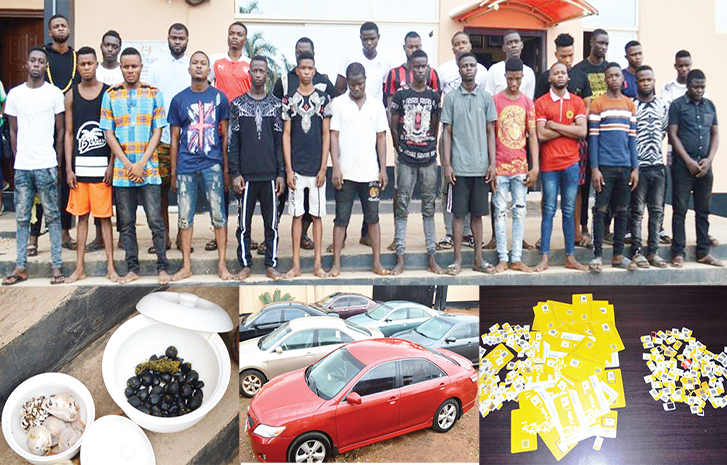 “Baba God will always provide data for subscription”. That, I am told, is the lingo of Nigeria’s new  swarm of criminal ritualists who have dedicated their miserable lives to using diabolical means to achieve instant wealth. The god of mammon has encamped in our land and there is no shortage of victims in this nation of 200 million hapless souls. Their “Baba God” is the god of lechery, cannibalism, and coprophagia. In place of water, this millennial god drinks human blood.

We used to marvel at how ‘Yahoo-Yahoo’ — the internet scam which almost became Nigeria’s middle name, came upon us like a thief in the night. Now, the malignant boil we covered with the cloth of negligence has become full blown gangrenous ulcer which makes us stink, literally and figuratively.

We must never allow ourselves to get used to these aberrant developments as we seem to have accepted Boko Haram and armed banditry; corruption and kleptomania; unearned wealth and ostentatious living, and many other terrors flagellating our people’s psyche. How much more can a society take before it is consigned to the garbage heap of dislocation?

There hasn’t been any dedicated program to address the massive erosion of values apparent in our youths’ misdirection. Our governments at all levels are on holidays, making only lachrymose pronouncements between one horrific incident and another. For those who ended up being deleted because of the government’s incapacity or neglect, the funeral train is long, the end of one procession is the beginning of another.

If the newspapers are not highlighting the latest horror stories from Yahoo-yahoo gangs or Yahoo-Plus cultists, they are giving us blow by blow accounts of rapes, cold-blooded murders and new variants of old rites of demonism. And we shrug as if saying, “Well, it’s one of those things…”

It was the heart-rending murder of 22-year-old Oluwabamise Ayanwale in Lagos that shook us out of our habitual languidness. The young fashion designer had boarded an Oshodi-bound Bus Rapid Transit (BRT) bus at Chevron Bus Stop in Ajah. In the course of the journey, she had observed that the driver was not picking up other passengers at subsequent bus stops. This made her send voice notes detailing the number of the vehicle and other observations to her friends and family members. That was the last they ever heard from her.

The police and DSS weighed in and traced the fleeing driver, Andrew Omininikoron, to his hideout. He has since been spinning one yarn after the other to rationalise how his passenger died and why he voted with his feet instead of reporting the incident at the office where he quietly parked his bus at the end of the day.

Another young, promising life was thus wasted. What rankles is not just the crime, but the cold unfeelingness that would make one human being orchestrate or witness the violent killing of another and still go home to sleep as if nothing happened. The driver, Andrew Omininikoron, will have his day in court and, hopefully, justice will be served. While waiting for that day, we owe a debt of gratitude to Oluwabamise Ayanwale for having the presence of mind to send those messages and voice notes which enabled the authorities to nab the last man known to have seen her alive. Talk about fighting from the grave!

Criminality is a global phenomenon. What is inexcusable is our refusal to confront it with the required seriousness based on scientific research, systematic programme of action and collective resolve. We do have a National Orientation Agency but it seems the body itself could do with some re-orientation. What is happening is deserving of all the urgency we can muster because we are faced with a war against our collective tomorrows. If in doubt, take a virtual stroll on social media.

A mother, Mrs. Eziada Chika Mbachu, was invited by her 38-year-old son for a visit. Routine? No! Her son suddenly unleashed a surprise attack on her with the intention of removing her body parts for a money-making ritual. But for the quick intervention of neighbours who had all along suspected the young man of hobnobbing with Yahoo-plus elements, he would have succeeded in mutilating his mother. But she has many knife lacerations to show for her ordeal.

In Okuokoko, Delta State, a food-seller named Mrs Oke Ereeganoma didn’t know what lay in store for her when her boastful son invited her to visit. He had always bragged that he would soon be riding a Mercedes GLK SUV. His mother did not suspect that anything was amiss, even as her son was in an unusually exuberant mood, playing loud music and dancing. Suddenly, her son attacked her, trying to gouge out her eyes for ritual.

Yahoo-Plus is a combination of the evil and the bizarre. In some cases, young men are required to provide used women’s underwear as part of the ritual ingredients. As with every other kind of madness, pant-stealing soon became an epidemic.

In Ughelli,  a  young man with stolen female pants and braziers was caught by local guards. On being questioned after a thorough beating, he confessed that some rich friends directed him to bring the items for rituals that would make him rich. In another incident in Umutu, two pant thieves, Emeka Nwosa and Jerry Obi, were caught with 10 female pants. What gave them away was the last operation where they forced a 15-year-old girl to take off her pants. The girl raised an alarm and the community rallied to her aid.

The ritualists also collect body fluids for ritual. Thus, items like menstrual pads or even wet sand on which a woman had just urinated, come in handy. Some of the ritualists would rather buy the items from third parties than take the trouble of scouting for them directly. In Abuja, some Babanbola scavengers who ruminate through garbage bins have been arrested by watchful security guards who noticed that they were harvesting menstrual pads and storing them in a special bag. When apprehended, they confessed that there were some ‘big men’ who paid good money for the items.

One Rasheed Ajibade in possession of human body parts was arrested by the police in Boripe, Osun State. He said he was only a supplier to one Alfa Isiaka Akande, a ritualist/herbalist who specialised in money-making rituals. Akande confirmed that he was the end user and that he had clients on whose behalf he was procuring those things. When Akande’s compound was searched, the horror chambers revealed live victims waiting to be sacrificed

The most disgusting of the new low to which our young people have sunk is eye-popping Coprophagia — eating of faeces. In videos after videos, these lost souls openly strip, defecate, scoop the poop with loaves of bread and eat their excrement to the horror of passers-by. Could there be a lower abyss than this?

We need a moral rebirth on a national scale. First, we must exorcise the society of this get-rich-quick demon which makes young people think that there is a short route to wealth other than hard work and perseverance. In an environment where there’s an acute shortage of good examples, the least we can do is start from the basics.

A massive attitudinal change campaign is required, many times more elaborate than the War Against Indiscipline of the 80’s. The campaign has to focus on the family; dignity of labour; the Ubuntu philosophy of our cultural roots; leadership as service; anti-corruption; calling out instances of impunity; examples of Nigerians of unassailable integrity (we’re not all thieves)!; and the dream of where we want Nigeria to be in the next 20 years.

In the absence of any such programme, our young people are rudderless. Don Marquis’ words aptly describe our predicament: “Ours is a world where people don’t know what they want and they are willing to go through hell to get it”.

No doubt, these are desperate times and many people are on short fuses. The other day, in the wake of the scandalous fuel scarcity hitting the nation, one black market fuel hawker was threatened with arrest and seizure by policemen. All his colleagues had shown the police a clean pair of heels, but this man stood still. When the police made a move to swoop on his petrol cache, the young man quickly gave the bundle of money in his pocket to a friend and ordered the friend to deliver the money to his family. Then he took a petrol bath in open glare, holding a cigarette lighter, and dared the police to come near. Everyone scampered for safety.

Can our cyber activists and citizen journalists champion the campaign for attitudinal change? Or will the government live up to its responsibility and lead the social and ethical resurgimiento?

(Wole Olaoye is a public relations consultant and veteran journalist. He can be reached on wole.olaoye@gmail.com, Twitter: @wole_olaoye; Instagram: woleola2021)######

Fulani; God has given the land of Nigeria, especially the South West To Us – Gen Togun

Igboho In His New Year Message, Tells Buhari’s Government To Do Its Job, Protect Nigerians