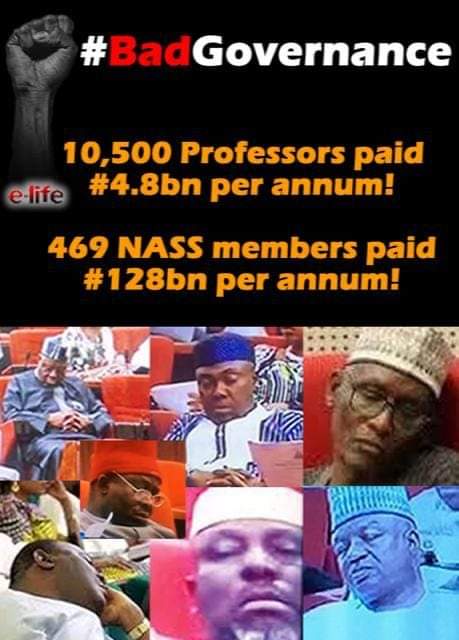 Following the National Executive Council, NEC, of Academic Staff Union of Universities, ASUU, said it was embarking on a month strike to press the Federal Government to meet its demands on Monday February 14, 2022, in a swift reaction, the Federal Government accused ASUU of being insincere in its claims on the reason for the declaration of a one-month warning strike, describing the strike as illegal.

It also said the University Transparency System, UTAS, which ASUU came up with as the payment mode against the Integrated Personnel and Payroll Information System, IPPIS, had not passed the integrity and security tests conducted by the National Information Technology Development Agency, NITDA.

This is even as the Ministry of Education has set up a group to look at the renegotiation of the 2009 agreement as it concerned the condition of service, salaries and welfare packages of workers.

The Minister of Labour and Employment, Senator Chris Ngige, who responded to Vanguard enquiries on the position over the warning strike, said he had not received any official communication from the university teachers.

The problem is, how can the federal government of Nigeria accuse ASUU of being insincere when is is clear that the problem is the federalism we practice in Nigeria.
How can the same wages be paid for workers in Dutse, the capital city of Jigawa State and Lagos, in Lagos State.?

Nigeria has centralized everything to our detriment of every sector and institution in the country. The Employers and employees should negotiate in good faith and abide with the agreements.

One thing that can solved immediately is, disband ASUU, and let the chapters negotiate with their employers.

The highest paid lecturer, a Professor at bar, in the Nigerian university (Great UI, Great Ife, Great ABU, Great FUTA etc) earns less than N500,000 per month. They work their life out. They are also expected to continually be involved in research. They are expected to either publish or perish!

There are many agencies in Abuja where a fresh graduates earns nothing less than N1.5million per month.

Senators and House of Reps members earns not less than N20 million every quarter as office allowances. This is not part of their salary o!!!

There are tonnes of agencies with heavily padded budgets for running expenses. All at the expense of Nigeria.

In the UK and the US, the teaching profession is a national priority profession. Lecturers don’t have to fight to get paid, they are left to the school districts and their boards.

Since the military days, we have not been having civilized leadership that can proactively act in the interest of the common good on its own without being fought. People have to fight to excract little concessions from leadership here and there. When people don’t fight, nothing good comes to them.

Recently, a man was being praised for not collecting kickback from the money he ‘attracted’ from TETFund (TERTIARY EDUCATION TRUST FUND) to his university whilst he served as Governing Council Chairman. What was not stated was that TETFund was a product of ASUU strike! If you visit our universities today, more than 70% of infrastructure there were built via TETFund (previously ETF).

Often, government has claimed there is no money. Yet, ASUU members and the rest of the people see the humongous amount of money wasted by the government on irresponsible expenses year in year out since 1992! Is it the bullet proof SUVs that have come to define our brand of democracy? The long convoy of vehicles for every big man in government? The unnecessary foreign trips and jamborees for family and friends of government officials? The multiply expensive infrastructure cost? If a road or rail-ine is built for USD500m in Kenya, half the distance would cost USD2billion in Nigeria. Etc etc.

So, the people need to understand the context. I have said many times under my breadth that ‘o ti ni ASUU l’ara ju’ (ASUU is stubborn) but when we reflect on the background, we cannot in good conscience blame ASUU. We can only blame leadership – Tunji Arimoyo

RESTRUCTURING AND THE OVERHAUL OF THE NIGERIAN 1999 FRAUDULENT CONSTITUTION IS THE ANSWER!

Atiku did not hold meeting with US State Department, he lied – Afegbua

Nigeria and the spirit of asise, by Simon Kolawole

2023: Massive Peter Obi National Structure And Those Behind It Unveiled

Full Extract Of Kyari’s Conversation With Hushpuppi That Nailed Him