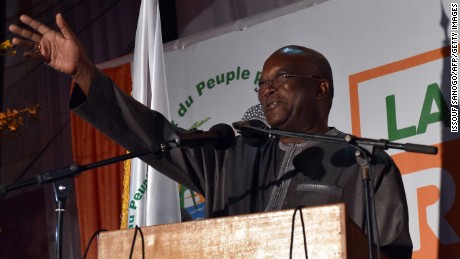 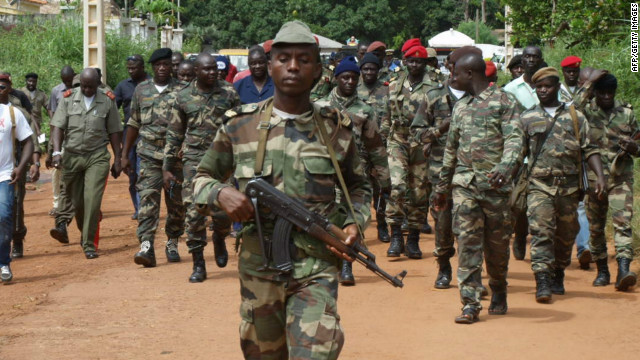 Soldiers walk in Guinea-Bissau’s capital in 2012.

The Economic Community of West African States (ECOWAS) has called for peace in Guinea-Bissau, as gunfire was heard around the government palace in the capital Bissau on Tuesday, triggering concerns of a coup.”ECOWAS condemns the coup attempt and holds the military responsible for the physical integrity of President Umaro Sissoco Embalo and members of his government,” ECOWAS said in a statement.”ECOWAS asks the military to return to their barracks and maintain a republican posture,” the statement concluded.

The unrest in Guinea-Bissau comes after a military coup rocked Burkina Faso on January 24.

Mamadou Jao, an academic in Guinea Bissau, told CNN that the streets were quiet across the capital, as worried residents stayed inside awaiting more information.

“Bissau is quiet but we don’t know what is happening near the government place… We are waiting to know more about what is happening,” Jao said.
Jao added that the power was off in homes saying: “The place is in darkness for about three or four hours. It is not something that happens normally.”The UN Secretary-General Antonio Guterres also called for an immediate end to the fighting.

“The Secretary-General is deeply concerned with the news of heavy fighting in Bissau,” said a statement on Tuesday.David Glovsky, assistant professor in Africana Studies at the University of Albany, told CNN that since taking office in early 2020, Embalo “has faced many challenges to his legitimacy, including disputes over his election itself.””I doubt many Guineans are surprised by another coup attempt, and yet this is still so disappointing,” Glovsky said, adding:

Regardless of anyone’s feelings on President Embalo — and there is a real range — Guineans have too often been at the mercy of the military, and elite conflicts that do not necessarily focus on the concerns of Guineans across the country.”

Guinea-Bissau’s history has been marked by several military coups since the country gained independence from Portugal in 1974.These conflicts have ravaged the country’s infrastructure and economy, leaving it among the poorest in the world.

Sanusi Lamido Sanusi: An Emir Without Kingdom, Wearing Big Turban Bigger Than A Mountain, A Swagger Stick With No Authority But Ego Bruised When Called An Ex Emir, Bares His Fangs

Methodist Prelate Shares His Kidnapping Experience, Says The Nigerian Military Is In On It

The CPAC Nonsensical Summit in Florida!!!!!