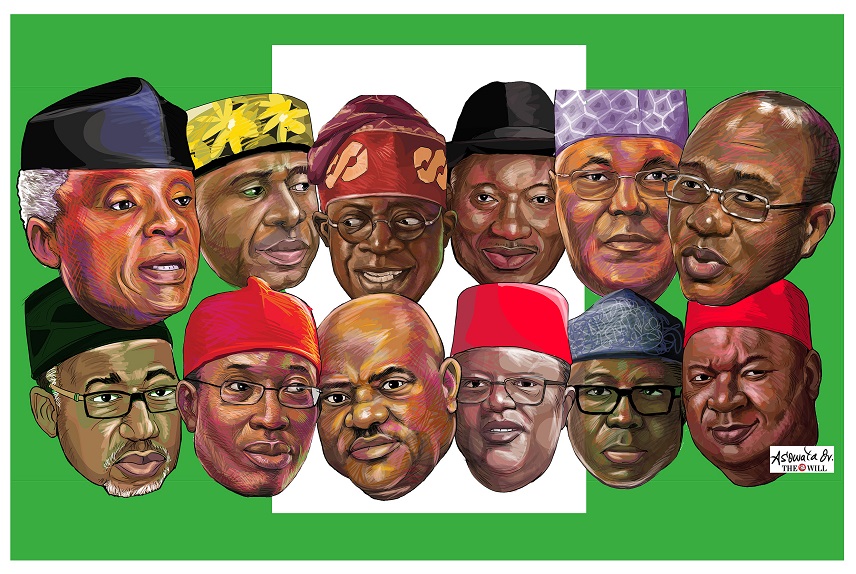 ON THE WAY TO ASO ROCK

The battle has begun. Tinubu has gone to Aso Rock to announce to Buhari the secret everybody in Nigeria has known for so long. Bola Ahmed Tinubu is ready to roll out his many bullion vans, his ubiquitous foot soldiers and his fast talking and fast writing PR men. In a never-before-seen display of shock and awe, Tinubu plans to grab Aso Rock villa with both hands. There will soon be posters, banners and buntings everywhere proclaiming Tinubu as Nigeria’s potential savior. Television adverts and intricately crafted documentaries will also fill the air.

If the Asiwaju team thinks that their principal is the only one dreaming dreams of becoming the Number 1 citizen of Africa’s biggest nation, then they may not be as sharp as they ought to be. With the problems that Nigeria has, you would think that nobody would want Buhari’s job. No! The guy who resides at Aso Rock determines who gets what and who keeps what. In the next couple of weeks, we will hear many tales of those who are itching to deploy their own bullion vans and foot soldiers in the theatre of war and match Tinubu, bazooka for bazooka. Many more people will visit Buhari. Many will leave believing that they have the blessing of the old man. I laugh…

The spiders, crocodiles and vampires on the way to Aso Rock are mind boggling. Beyond the bullion vans, there are intrigues, deceptions and betrayals that no screen writer can contemplate. To enter Aso Rock, even by means of a coup, takes everything.

I knew MKO Abiola very well. Despite our different ethnic origins, he treated me like a cherished younger brother and spoke to me on many intimate issues. Indeed, I had a multiple entry visa to his Ikeja home. Most people remember the late MKO for his prodigious wealth, I remember him for his prodigious intellect. The man was as sharp as ‘Crocodile Narcet’. Before the computer notebook was made public for worldwide use, Abiola had a motherboard and processor in his head. Abiola remembered everything and forgot nothing. He could outthink anybody at dizzying speed. Yet when it came to Aso Rock, Abiola with his massive intellect, unsurpassed contacts and many-many bullion vans thought he had got the keys to the villa. Na lie! As he tried to open the gate, he found that the keys had been changed. Abiola died fighting for the keys he thought he got fair and square.

Atiku Abubakar lived in the very next building to the Aso Rock mansion. As Vice President, he knew all the pathways and back doors to the villa. Atiku Abubakar has deployed money, lots of it; has travelled far and wide on different vehicles; compromised with people he otherwise would not speak with. At times he lost his way, retraced his steps and began the journey again. When Atiku Abubakar began his walk towards Aso Rock, the villa was very close but the more he has walked, the father away the villa has become.

Ask Peter Odili how many truckloads of money he off loaded and how many miles he travelled on his way to Aso Rock. Odili did not even see the gate of the villa. He was given an admonition and turned back at Eagle Square.
Anyone who tells you that he knows who will be the next president of the Federal Republic of Nigeria, is a big liar. Not even Buhari knows. Believe me, there will be many twists and turns in the tale. There is no question that Tinubu has enormous resources of men and money. He has built a significant war chest. He obviously has done well for himself in Lagos. His success might turn out to be his albatross. There are many who are scared of Tinubu and are hell bent on opposing him. They point to how Tinubu easily became the “Emperor” of Lagos. They don’t want him to be the emperor of Nigeria.

Who would have forgotten the tale of the last governorship election of Godwin Obaseki in Edo State. It is reported that many in Edo State told Tinubu to return home as Edo is not Lagos with the hashtag, #edonobelagos, trending. Will a new hashtag, #naijanobelagos begin to trend? Is the recently reported ambition of Tinubu’s “boy”, Vice President, Yemi Osinbajo to succeed Buhari real? Or is it a diversionary measure, a dummy?

If in 2008 someone told you that one Goodluck Jonathan would become President of the Federal Republic of Nigeria, would you not have told the person that he is drinking too much ‘ogogoro’? Goodluck Who? Twice, Goodluck Ebele Jonathan walked through the Aso Rock gate and occupied the place, something Abiola could not do, Atiku has still not been able to do and Odili could not do. I repeat that anyone who tells you that he knows who will be the next president of the Federal Republic of Nigeria, is a big liar. There will be many quarrels and disagreements within the parties. There will still be many decampments. No conclusions yet, While men are writing their scripts, God is writing His.

The horror movie, bigger than anything ever created by Hollywood, Bollywood or Nollywood, will be on show at theatres all over Nigeria this year and early 2023. It will be intriguing, that is if we do not get a Jerry Rawlings who jumps in and says, “enough is enough with this madness in Nigeria!”.

Igangan Killings: “Yoruba People Are Not Fools” – Ooni of ife

RE: “THE BANDIT WARLORDS OF ZAMFARA”