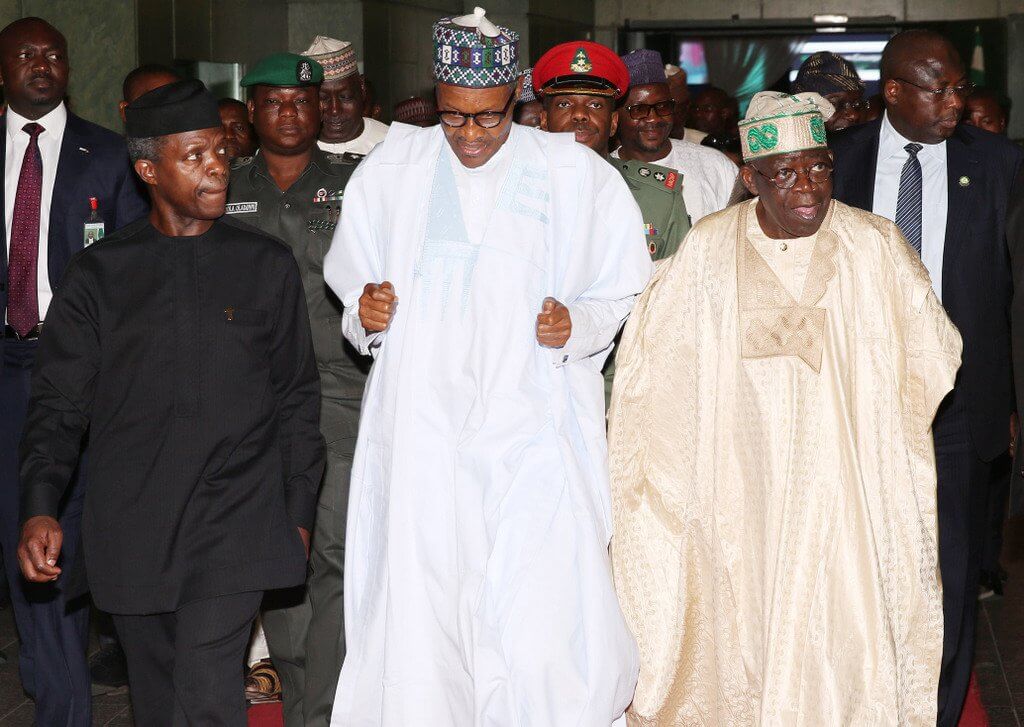 APC’s Propaganda to Exclude Other Parties from 2023 Election

In today’s Saturday Tribune/Peoples Gazette column, I argue that focusing on whom between Tinubu and Osinbajo should be president plays into APC’s propaganda tactic called the rhetoric of inevitability that makes us think they’re the only ones that matter and causes us to forget about the dreadful record of their misrule, which should disqualify them from seeking continuity:

Anyone who has monitored Nigerian political punditry in the institutional news media and on social media in the last few weeks would be led to suppose that only candidates of the improperly named All Progressives Congress (APC)—who are actually a bunch of opportunistic, conservative fascists— would be participating in the 2023 presidential election.

The bulk of traditional and social media commentary on the presidential election has devolved into a pointless internecine feud between supporters of Bola Tinubu and Yemi Osinbajo. Even the reportorial ambition and inquisitiveness of our traditional newspapers have been circumscribed by the unwarranted presumption that the choice before Nigeria in 2023 would be between Tinubu and Osinbajo.

As I pointed out in my social media interventions, the raucous social media shouting match between headless Tinubu and Osinbajo supporters could very well amount to dancing themselves lame in rehearsals for a dancing contest they may not eventually take part in, but given the uncertainties and perpetually shifting nature of political alliances and alignments in APC, no one can make any forecasts with cocksure certitude.

Nonetheless, in focusing almost exclusively on the contest of supremacy between Tinubu and his sidekick, Osinbajo, we rhetorically marginalize alternatives in other parties who can conceivably produce the next president. I’ll come back to this point shortly.

Commentators, news reporters, and opposition politicians probably haven’t realized that APC is playing a smart political con game on the country. I study, teach, and write about persuasion and mind management. What APC is doing by pushing us to dualize political sympathies between Tinubu and Osinbajo— and causing these sympathies to perpetually dominate the news cycle and political commentary— is called the rhetoric of inevitability.

The rhetoric of inevitability predisposes the electorate to accept as given the idea that the next president of Nigeria must be the nominee of the APC. It sneakily tries to ingrain it into the consciousness of Nigerians that other political parties don’t matter and have not a snowball’s chance in hell of defeating the candidate of the APC in the general election.

In other words, it impels people to come to terms with the notion that Nigeria is a one-party state and that whoever wins the APC’s nomination is guaranteed an unfettered and inexorable march to the presidency of Nigeria.

The strategy is working—at least for now. Whether you are for or against either Tinubu or Osinbajo and expend precious emotional and intellectual energies in justificatory rhetoric about your support for or opposition to either of them, you’re being suckered into the carefully planned rhetoric of inevitability of the prolongation of APC’s incompetence.

What the rhetoric intentionally hopes to conceal, more than anything, is the nakedly transparent facts of the proven incapacity of the APC to govern and reform Nigeria after nearly seven years in power.

In every imaginable index of human development, Nigeria has retrogressed under the lumbering weight of the incompetence of the APC.

Under APC, Nigeria became the poverty capital of the world. While APC has been in power, the International Police Science Association’s and the Institute for Economics and Peace’s World Internal Security and Police Index also shows that Nigeria’s police service is the worst in Africa and in the world. And, of course, under APC we became the third most terrorized country on earth.

Nigeria’s APC government was ranked the second worst in the world in “government integrity” in 2018 by the US-based Heritage Foundation. Only the Venezuelan government is worse than it.

In Oxfam’s and Development Finance International (DFI)’s global ranking of “Commitment to Reducing Inequality Index,” Nigeria was ranked 157 out of 157 countries.

An analysis published by the Coalition for Whistleblowers Protection and Press Freedom showed that “Under Buhari, Nigeria records [the] worst attacks on journalists in 34 years,” according to Premium Times.

And, in spite of the APC government’s tiresomely sanctimonious noises about “anti-corruption,” Nigeria has consistently regressed in Transparency International’s corruption perception index since the current regime came to power.

According to data from the National Bureau of Statistics, when APC came to power in May 2015, youth unemployment was 13.7 percent. By July 2017, it climbed to 33.1 percent. It increased to 53.40 percent in the fourth quarter of 2020, up from 40.80 percent in the second quarter of 2020, according to the National Bureau of Statistics, a government agency.

That’s one of the worst statistics of youth unemployment you can find anywhere in the world. Yet when Arise TV interviewed Buhari on June 10, 2021, he evinced perverse joy in saying that there are no more vacancies, jobs, or contracts in federal, state, and local governments. He ended by saying, with malignant glee, “So, you may have a good degree, but you may DIE WITHOUT EVEN A JOB!” What kind of person derives joy when the people he supposedly leads writhe in existential torment?

In the World Bank’s “Global Economic prospect” report for 2022, it said “Nigeria’s economy under the Muhammadu Buhari administration is worse than 10 years ago,” according to the Peoples Gazette’s reporting, which every Nigeria already knows.

The list is endless. No decent country on earth would reward the gang of incompetent know-nothings who presided over such an irrecoverable state of devastation and destruction of a country with continuity in governance.

Tinubu and Osinbajo represent a duad of dreadful ineptitude who have been part and parcel of the calamity of the last seven years. They are both tarred with the same brush of moral turpitude, incapacity, callousness, avarice, hypocrisy, and overweening ambition as Buhari whose legacy they both vow to continue with.

Plus, rankings by the respected Economist Intelligence Unit (EIU) consistently show every year that Lagos, which Tinubu and Osinbajo ruined together for eight years, is one of the world’s “least livable cities.”

People who have made Lagos one of the worst places to live in the world and helped contribute to making Nigeria the poverty capital of the world and a leader from the bottom in most human indices want to be given another chance to destroy what remains of the country, and people are consumed by mindless fights over who between the two should lead the charge to bury us. We are not serious people!

In a January 12 social media post titled “Tinubu, Osinbajo, Buhari: A Troika of Treacherous Villains,” I pointed out that “Muhammadu Buhari, Yemi Osinbajo, and Bola Tinubu represent a triumvirate. They reinforce, reflect, and inflect each other” and that “Both Tinubu and Osinbajo have been important props to Buhari’s ongoing disastrous regime of ungovernance. Without them, Buhari won’t be president. They also helped plant, grow, and fertilize Buhari’s autocracy and monstrous incompetence every damn step of the way.”

It’s distressing that even otherwise clear-sighted people who recognize that the APC is a clear and present danger to Nigeria— and that Tinubu and his political creation, Osinbajo, are core constituents of the conscienceless gang of villains that got us to where we are now— are seduced by the rhetoric of inevitability of APC’s self-succession.

APC’s mind management tactic of creating a discursive regime of the inevitability of its self-succession has been effective because Nigerians love false dilemmas (“if not Tinubu or Osinbajo, then who?”— as if that’s the only option), easily make peace with their oppression, and forgive their tormentors who are at the upper end of the social scale.

Although the PDP has been lackluster and incompetent in opposition, it has as much chance to take over power as the APC. There is now an unjustified by entirely understandable nostalgia for PDP in light of the total social collapse that the APC has supervised.

It’s also entirely within the realm of probability that a third-party candidate such as the impressively cerebral Kingsley Moghalu who has launched a massive grassroots outreach across Nigeria and whose appeal widens incrementally could spring a surprise and win.

As I signalized in my January 11 social media update titled “Why the 2023 Presidential Race Will Be a Shot in the Dark,” because no incumbent is seeking reelection and INEC chairman Mahmood Yakubu seems to be free of the encumbrances that his benefactor Abba Kyari imposed on him in 2019, no party has any clear advantage over the other.

“This is probably the most variegated, endlessly changing patterning of political variables in Nigeria’s recent political history,” I wrote.

Let’s not allow APC to propagandize us into accepting that their internal politics is our national politics. We should instead be asking them to account for the incalculable injuries they’ve collectively inflicted on our economy, our freedoms, our national emotions, and for reversing whatever little progress we were making before they took over.

Oil companies be warned, Rivers VAT not for Abuja people, I don’t care if heaven falls – Wike Doubles Down

NIGERIA ARMY AND THE BRIDGE TOO FAR