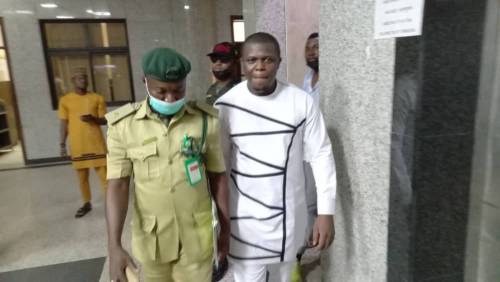 The trial judge, Folashade Giwa- Ogunbanjo while ruling on the matter on Monday struck out the case on the ground that it was defective.

AFederal High Court sitting in Abuja has struck a case filed against a 29-year-old pharmacist, Solomon Akuma, who tweeted that he would “pay a Russian sniper to kill Buhari and his former Chief of Staff, the late Abba Kyari”.

The trial judge, Folashade Giwa- Ogunbanjo while ruling on the matter on Monday struck out the case on the ground that it was defective.

The judge said there was no valid charge before the court and that the matter was not diligently prosecuted.

She said the case file would be returned to the Director of Public Prosecutions (DPP) in the office of Attorney General of Federation for further action.

The judge added that the judgement does not give protection to the defendant from future investigation.

The defence counsel, Emmanuel Ukaegbu prayed the court to discharge the defendant who was in a correctional centre.

Ukaegbu said his client should be released since the matter has been struck out.

The judge, therefore, asked the defence counsel to make a formal application to that effect.

Akuma was abducted and had been detained at the Force Criminal Investigation Department (FCID), Abuja, for over 11 months.

Activists, lawyers and civil society groups have condemned Akuma’s continued detention and called for his release, saying he did not commit any crime to warrant such a punishment.

Akuma’s tweets were in response to a Twitter post asking respondents what their next move would be if they got $1 million.

Akuma’s father, Emmanuel Akuma was deceived by the police in order to get his son arrested.

The father said he had received a call from a person ”who disguised to be a person seeking to reward him for praying for him in the past.”

“It was me they used as bait to get to my son. They used me as their link. Someone must have dug up my profile and they found out that I was a pastor,” he said.

The cleric added, “Someone called me that I had prayed for him at a place. He said he wanted to honour me and that he and others would be coming on a particular date.

“They also said that they would visit me and give me an honorarium. I said I was not really aware of what they were talking about.

“They said I should not bother that they knew me as a pastor. I said, okay, no problem. They said I had once ministered in their church.

“I was not around at the time because I went for burial in my hometown. So I lodged in my in-law’s place.

“I said no problem, but something ministered to me that those guys were not what they said they were and as it turned out to be, they were policemen.”

He said he reluctantly agreed to meet with them and took them to his in-law’s place, where they “arrested everybody and collected all our phones at gunpoint, and marched us into a red jeep they parked outside.”

He said the policemen later used his phone number to call his son “telling him that his father lost the phone”.

“In fact, because of all the weapons they had I couldn’t react because I could not ascertain who they were,” he said.

The cleric said when his son arrived at the scene, the men immediately arrested him.

“So, at that point, they gave us back our phones, and they took him to the police station, down to Umuahia, to Enugu and the next day, they went to Abuja,” he said.