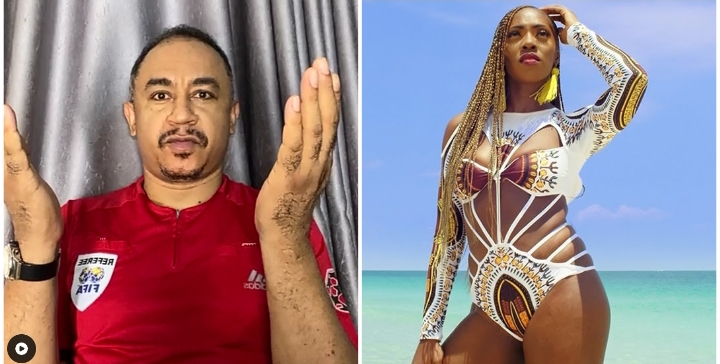 Tiwa Savage in The Heat, Breeze of Sex Scandal

Let me start by confessing that I am a fan and admirer of Tiwa Savage. I appreciate her vocal prowess, softness, artistic profundity and scandal-free career until her marital crisis erupted in 2016 which threw her into the league of single moms, now available and searching for love again.

Tiwa is a well exposed artiste. She presented herself as a home-groomed and a typical Yoruba woman steeped in esteemed cultural and societal values until she started having messy encounters after her failed marriage. Watching her from a distance, I don’t know if she actually merits the ‘good girl’ impression I have about her as only her family members and close friends can confirm that. In my days as a music critic, it was not my style to write about private life of artistes. I focused on their works. I did critical appraisals of known and upcoming artistes in a constructive manner that would enhance their performances and improve the quality of their productions. If Tiwa Savage had surfaced at that time in the 1980s and 1990s, she would have earned some positive reviews in my “Sound Judgment” column as a performing artiste because of her flexibility and dexterity being an accomplished singer.

When her marriage broke up, not a few Nigerians empathized with her. Part of the issues that characterized the crisis was accusation and counter-accusation bothering on infidelity. Scandalous rumours started making the rounds that she had serviced the bedrooms of her producer and notable contemporaries in the music industry. Notable names were maliciously rumoured as taking turns in having romantic moments with her. Much later, the rumour turned out to be a farce. The dignified silence of celebrities and star artistes mentioned in the rumour punctured the lies in the narrative.

Meanwhile, Tiwa Savage, 41, went loose shortly after. She started rollicking with 31-year-old Wizkid; an affair some fans justified as a sting on her estranged husband, Tunji Balogun (Tee Billz), who allegedly messed her up. Despite excessive and shamefaced display of erotic scenes both in Wizkid’s musical video and hangouts, the public tolerated Tiwa rationalizing her actions as a part of ‘healing process’ from her broken marriage. The adventure was short-lived. Wizkid moved on when he was done leaving love bemused Tiwa stranded and lonely. Whatever happens, life has to move on, hence, she launched into the ocean of love as a single and searching woman.

My observation is that Tiwa prefers younger men to older men or guys in her age bracket believing that younger dudes possess the youthful energy to satisfy her in bed. The craze for macho dudes have subconsciously instituted a cult of gigolos who are always available to service the ‘big girls’, single corporate women, the wives of the rich and top political office holders who rarely have time for their women due to endless trips, meetings and romantic adventures away from home. Highbrow locations in Lagos and Abuja are the hubs of the rich psychedelic and nymphomaniac babes. Incidentally, many celebrities especially women are involved in this crave. Even some married women do keep the “baby boys” by the side for sexual satisfaction.

Tiwa’s boyfriend, simply identified as Abolo, a much younger dude, is allegedly turning to a blackmailer in quest to turn the “My Darling” crooner to an ATM from where money could be sourced at anytime. That is the stock-in-trade of such guys.

Having made her choice, Tiwa should have been more discreet in her affairs. As she goes about catching fun, she ought to know where to set the limit. No matter how exciting and ecstatic her sexual intimacy might be, she should never have allowed anybody to record both the audio and video of her private moments. Since she’s yet to remarry, it shouldn’t be allowed. Like I noted in the last edition of this column, husband and wife are at liberty to do whatever they choose to do with themselves in their closets.

Back to the sex filmmaker, recording sexual intimacy without the consent of the partner is wrong. And in case where there’s consent, making it public or using it as a blackmail item is actionable in the court of law. Somebody should be made a scapegoat to serve as a deterrent to the others. Blackmail is an offence. In other climes, what we tolerate here could make some people rot in jail. Henceforth, blackmailers should be made to pay for their crime.

I read a story on WhatsApp about a Slay Queen who hooked up with a man she met on Facebook. They chatted and agreed to meet in a hotel. They met and she was paid for her service but unknown to the man, she secretly recorded him naked. A few days later, she was threatening the man using the video as a tool of blackmail by asking him to pay her N15 million but the man refused. She then released the video on Facebook. The man reported the matter to the DSS and she was arrested and charged to court. Her bail alone was N5 million plus a landed property. I saw her photographs in handcuffs as she alighted from a Black Maria. The incident was said to have taken place at Yenagoa, Bayelsa State. She’s reportedly cooling her heels at the Okaka Prison as you read this column.

Bursting the internet last week, Tiwa Savage’s leaked sex tape went ingloriously viral. As explicit as the 10 seconds clip is, the scene did not do any credit to the public image of the star singer at all. Knowing what he was up to, the guy did not show his own face. Apart from filming the private parts, he swirled his device to show her face to ward off possible denial by the time it gets to the public. The guy didn’t talk, it’s only the moaning of Tiwa Savage that filled the ecstatic atmosphere.

Trust Nigerians, diverse comments and opinions over the video flooded the social media space. Someone requested Tiwa to please send the full version to her. I read of another who was said to have wept and apologized for viewing the tape. This is in addition to heaps of insults, reprimands and defence Tiwa received from the public. I feel for her even though it is good that it happened as it would tame her excesses and also serve as a deterrent to her ilk.

I do advise adults especially women to avoid intimate affairs with men that have nothing at stake or names to protect. Just as we have women of easy virtue, we likewise have men of low esteem. These two categories of people are risky to be involved with especially in intimacy. They could turn out to be enemies in seconds. To betray, slander, blackmail and viciously exploit the confidence reposed in them is their stock-in-trade. It is this caliber of guys that usually engage in blackmail and image smearing deals.

It is often said that gigolos and ‘baby boys’ servicing rich women and celebrities do perform under the influence of hard drugs to enhance their energetic sexual performances. And sometimes, some of the women, too, do get so ‘high’ on drugs or get tipsy on wine or liquor intake in order to maximize the moment. Looking at Tiwa Savage’s scenario closely, one could observe that she was ‘lost’ in ecstatic mood while moaning loudly with her eyes firmly closed. Her partner did the recording possibly without her knowing. She couldn’t deny the video because the clip shows her face. Whether Tiwa was actually ‘high’ on drugs or drinks as being argued by some people, it is left to her to confirm. Besides, the scenario appears to be a quickie, probably in a car as the setting suggested that it must have been a fling.

Tiwa needs to lie low, be calm and stop incessant outbursts or self-defence in the media; instead, she should focus on her career while embarking on a strategic damage control and image laundry campaign by engaging an experienced media or public relations consultant.

In conclusion, I want to align with the counsel of a popular online minister and worship leader, Olubukola Adediran aka Sister Bukky, who offered a godly perspective to the scandal. She condemned the act but not the actors involved. She appealed to believers to pray for the salvation of her soul; stating that God loves Tiwa Savage as much as He loves everyone else. At some point in life, “we all have done things we are not proud of.” She then urged the public to cease condemning her but they should look at her positive side by appreciating Tiwa as a great talent and a woman of destiny.

Yes! This kind of joke must stop. Sexual madness must cease! Private things must remain private! Those who feel that taking video is part of the deal whether with a partner or spouse should know that it should be done by consent, otherwise anyone doing this should be sued. – Simeon Ajueyitsi

State Of The Nation Nigeria: Terrorists & Jihadists At The Helm!