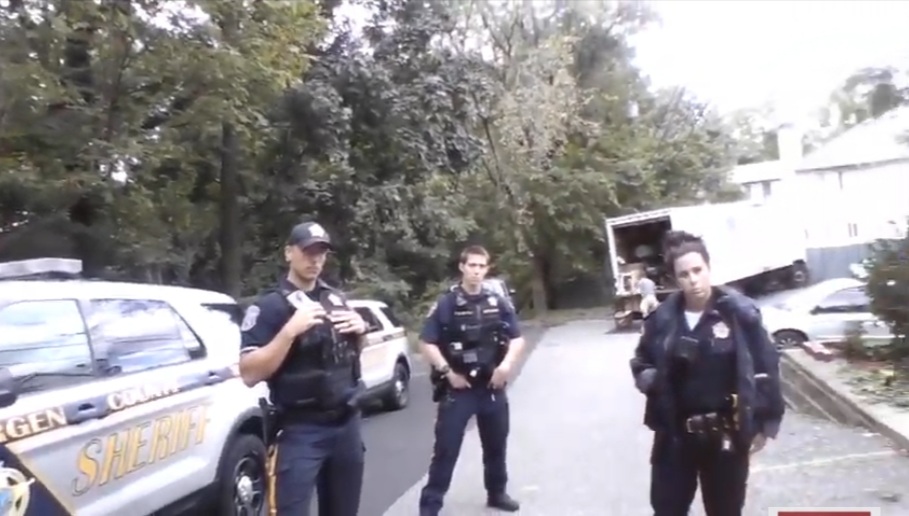 Being African or African American is fast becoming a sin and reason to be unjustly profiled as the system targets such especially when they are single parents or widows!

Being African or African American is fast becoming a sin and reason to be unjustly profiled as the system targets such especially when they are single parents or widows!

I bring you sad news about unlawful, illegal, unjust, forceful, race motivated ejectment on September 30, 2021 from our home in Bergen County, New Jersey.

According to Rev. Martin Luther King, injustice anywhere is threat to justice everywhere. This is the fourth home being illegally hijacked following the transition of my husband… the home has been paid off from the illegal sale of another home.

I need you to stand for what you believe in – JUSTICE as you keep me and my loved ones in prayers.

The Story of Injustice

Officers arrived our home on September 30 2021. One who came after the issue was escalated to an emergency is named Patrolman Johnson. They later forcefully and unlawfully entered our home commando style via the basement.

Our home has two address in land and city record. This was so done to racially bill us two taxes for two units if homes in one property. Though a two family home, it is taxed and billed as two one family homes!

I let the officers know I was never served but our other unit was served. This does NOT constitute service to me as a tenant lives there and she has been monitoring me via camera hence I refrained from going there. I was told of the notice but never sighted it as pasted and was NOT aware of the content but considering I am aware if the lawsuit, I sensed it could be about eviction.

In spite of severally letting them know the property I reside in is different from the one to be ejected, they forcefully entered, they had me in a violent control hold and injured me with evidence of blood when they violently and forcefully wrestled my my car keys.

Our property remains listed and owned by us! I was unlawfully arrested and ordered out of our home – 455 Grandview Avenue. Never served, never read my rights… I do NOT have their names but Patrolman Johnson had a body cam and so did the female officer who arrived ahead of him.

Unlawful assault and battery, unlawful undocumented arrest, unlawful violent collection of my car keys, unlawful driving of my vehcile and unlawful entry into our home, unlawful ejectment without any legal service, unlawful violation of my rights and contravention of federal and state moratorium rights

Injury includes battery of my hand, shoulders, wrist, fingers; finger is broken and there was blood which they ignored and never provided first aid. The control hold have left me in pain which seems to defy medications.

On September 30 2021 I was unjustly, illegally and maliciously removed by officers of the Sheriff’s Office, from my home without any legal service, notice or judicial order. I went to Englewood Police Department to report this but I was declined by the officer on duty. He referred me to Mr. Anthony Cureton’s Office. I called and was bounced aroynd in a bid to send em back to the Englewood Police Department but I declined on grounds that I had already been denied an opportunity to report and redirected from there to the Sheriff’s Office.

On Friday, with letter in hand I had made enquiries from a Sheriff’s Officer who turned me back that I should go and mail the letter, there there is no office to directly collect it.

The home indicated on the order shown (not served) that day, indicates our adjoining unit, where a tenant – Pamela Odudoh, who is staff of UN Women works.

On September 1 2021, Mr. Lars Poliandro, a church member who resides with me saw officers posting notice of ejectment on adjoining unit, 457. None was posted to ours. I assumed that the notice was for the illegal but judiciary supported take over of that unit.

On September 30 at 9.39AM officers from the Bergen County Sheriff’s Office arrived as we set up for a Praise Protest scheduled for that day to call attention to racial zoning, racial double taxation, racial hijack of properties, racial interpretation of probate laws and racial police brutality. Also representative of those illegally taking over the home plus a moving truck arrived in quick succession. When I was approached, I explained that I was never served and pointed to the home to be ejected.

I let them know that house on which was posted notice of ejectment which I never sighted posted as it was promptly removed by one of the occupants of the home rented by #PamelaOdudoh of UN Women is 457B noted in Land Record as 457. Ejectment notice showed by officer noted 457.

Soon they returned to show stick-on paper which had A or A/B. But this was not part of the ejectment order. I reside in A, noted as 455 in Land Record. The ejectment was for B noted in Land Record as 457. I explained I was never notified, that A and B have been illegally and racially taxed double for years. It was foreclosed due to illegal taxation

They called for Police back up until they commando style surrounded our home, came in via basement, 3-4 officers had me in control hold with one violently demanding my door keys. The bunch with my car keys was forcefully wrestled from me and I was injured in the process. No one read my rights!

Nothing was served on me till that point. This is illegal, police brutality without any judicial order or notice! Grandview Associates LLC registered by David Kessler who also was involved in hijack of another property – 88A Myrtle Avenue, Edgewater, bought at illegal foreclosure sale, 1 unit. Attached deed and land record shows 1 unit but they claimed to have bought both units! Both units are selaratedy taxed.

Buyers masked as DBA 457 Grandview Associates LLC noted David Kessler of Kessler Law in Livingston NJ. 354 Eisenhower Street, Plaza I, Suite 2250 is the same address for Kessler Law Firm represented by Michelle Conroy, staff of the firm. Property illegally bought was where I live but the buyers elected to unlawfully hijack the B side since March 2020 with zero legal process. The tenant, Pamela Odudoh (Otieno) of UN Women started paying rent to them. #JusticeforOmolola

From March 2020, in defiance of covid moratorium by Gov Phil Murphy, Michelle Conroy representing her boss, David Kessler, and Horizon Properties, they have been collecting rent with no formal lease transfer, no court order, no legal service to me.

Also, $500,000+ from the payments on property illegally bought also known as 457 was used to pay off the mortgage on my residence in July 2021 to Wells Fargo.

David Kessler under 457 Grandview Associates LLC bought by Kessler Law NJ went to court unjustly in spite of already taking over 1 unit, to maliciously and illegally seek to take the second unit and have me ejected. They bought 1 unit NOT entire house. Tax record and land record proves.

When I visited the court house to file stay, the court staff told me to word it as Order to Show Cause. Even ahead of hearing me, the Judge got the buyer’s attorney on the phone and handed over to me the address of the storage! This means it had been concluded ahead of the hearing… I pleaded with the judge on grounds I was never served. She insisted I was served. There was no document shown as proof. I showed two tax documents indicative of being taxed separately and referred her to the deed of the purchase by the buyer but she was adamant with complete lack of empathy. The attorney for the buyer – Michelle Conroy, lied in court that she is NOT representing David Kessler but 457 Grandview Associates LLC but Grandview Associates LLC is in care of Kessler Law Firm owned by David Kessler whose name is on the deed. Michelle Conroy works for Kessler Law Firm. Michelle Conroy is aware that her client, who is her boss, bought one unit and had already hijacked a unit but in a bid to do fraud on the court and me, she proceeded with a lawsuit in defiance of Executive Order 106 of 2020 and Executive Order 249 of 2021. Still the address mentioned on the unserved legal notice remains 457, same unit already hijacked since March 2020.

Requesting that I come to court was a malicious attempt to nail the coffin on the injustice by being able to say, we handed her the storage information. This does not validate assault, battery and unlawful ejectment with the connivance of a judge serving in the United State of America.

Following the ejectment, I have continued to receive hate mails. usually I get hate mails when injustice is being perpetrated on my person. This hater or mailers, use email addresses created for the purpose of denigrating me with no response path. They send it via my blogger account… I will take steps to disable the contact form as a way of protecting my mental health. For now, I have elected not to open the two most recent ones. Anyone who is able to trace the mailers via the IP may reach me.

When I visited the Englewood Police Department to file criminal charges for assault, battery and unlawful ejectment, I was declined an opportunity to file by the officer on duty – Officer Smidth. He referred me to the Bergen County Sheriff’s Office. When I called, I was bounced around under the guise that I must report at the Englewood Police Department.. When I stood my ground, I was passed around until I was connected to Officer Ruiz in the Internal Affairs Department. he was good natured and kind and listened to my story. He promised to dispatch officers to retrieve via USB, the recording on my laptop.

When they arrived, they did more than just retrieve documents, I was interrogated. It is sad that at the end of the long interrogation they insisted that the investigation is merely administrative and that they are unable to reverse the ejectment! I asked whether this would still eb the case after they verified via land record that the ejectment was done to the wrong home. Their response was neither here nor there. What I reported was criminal assault, battery and unlawful ejectment from our home with evidence of physical wound and blood as they were shown on the documents I held at the time of the battery or immediately after. I expect full criminal investigation

Retirement letter to Tinubu by FFK, in case you missed it in Feb 2021

Nigeria and the spirit of asise, by Simon Kolawole