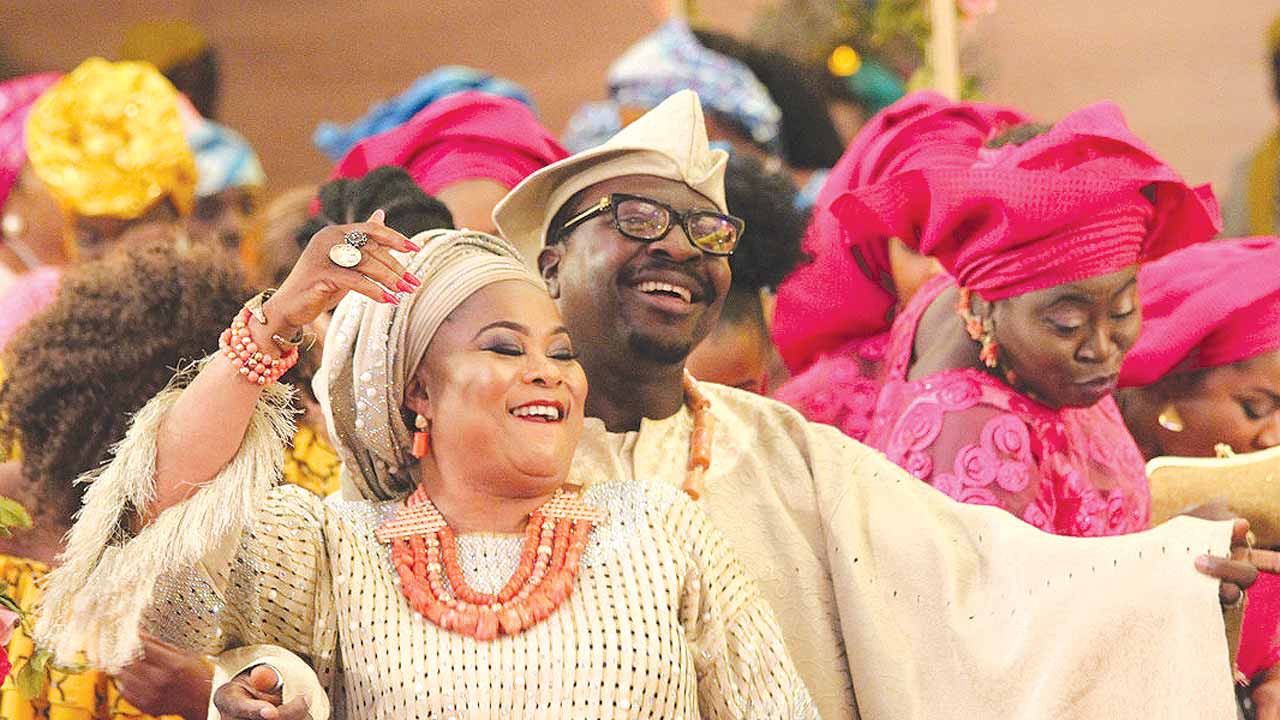 THE BEAUTY OF NIGERIAN WEDDING TRADITIONS

In the years gone by, ‘hired’ parents and ‘borrowed’ in-laws were a necessity for an urgent arrangement to fulfill “all righteousness” in the process of solemnising a marriage. It used to be a family affair in which people other than the biological parents of the intending spouse(s) were engaged or asked to represent the real parents in absentia. It is a practice that is common with orphans, those in the diaspora as well as those involved in disputed relationship which their parents disapproved of but they choose to go ahead to marry.

Not much issues have been reported about the arrangement but some families are groaning under the yoke of pseudo-parents while some arranged or hired spouses have refused to let go; in fact, they ended up truncating the original plan they were paid to help actualise.

A man is still writhing in pains for losing his pretty wife to a hired spouse overseas all in a desperate plan to relocate his family out of Nigeria. It initially appeared to be a common deal for the willing citizen of the European country to engage in marriage contract with the intending immigrant in a bid to fast track the process of securing residency and citizenship after which the way would be paved for the real spouse to come over. But the arrangement gone sour when the hired or contracted ‘husband’ saw the beautiful woman he filed for as his ‘wife.’ He bluntly told her “you should allow this fake deal to translate to a real deal otherwise I will truncate the entire process.” Not wanting to abort the process and the investment already committed into it, she accepted his terms. As you read this column, the original husband is still in Nigeria while his wife has become Mrs. Somebody overseas for about four years now.

I got a message from someone who was lamenting his unsavory experience in the hands of his hired parents who filed for him as their son-in-law into another western country. He was in a dilemma as to know the way forward. He is seeking some feasible solution to his caged situation. Read on:

“It is not every enticing offer that is actually a blessing. Likewise, it is not good to be desperate for some things no matter how good they may appear to be. I needed to relocate out of Nigeria after I lost my job and my relationship also crashed a few months after because my fiancée was not ready to support me in times of need. Thank God I had some savings which I could use to start a good business but with the sliding nature of the Nigerian currency at the forex market on daily basis, if care is not taking, I may end up a failure. That’s why I decided to seek a greener pasture outside the country.

“Someone introduced me to an elderly couple as those who could facilitate my trip abroad because they had lived there for many years. They had all their children there, too, as citizens. So, they agreed to help me not knowing that I was walking into a trap. Eventually, they made their daughter to file for me as her husband, from that moment I became their ‘son-in-law’ by trick. There was no solid agreement other than a strategy that would take me out of Nigeria using their daughter as my helper. It later dawned on me the reason they asked if I was married or in any serious relationship not knowing that my status fit perfectly into their expectations and plans for their daughter.

“Mr. West, you may wonder what’s wrong in that, after all I was not in any relationship but I was not comfortable with the way they went about it. They didn’t tell me that their daughter needed a husband. They didn’t ask me if I would like to be their son-in-law beyond the fake arrangement in place. I felt hamstringed into a relationship I was not prepared for. And to cap it all, the lady in question is bossy, arrogant and naughty but beautiful and generous. She can plug her eyes for the blind but her caustic tongue and brash attitude are too much for me to bear. Ordinarily, I would have seen it as a God’s will and plan for my life but hey, she’s not calm at all. The best she could be is a girlfriend or a baby mama and not a wife. A couple of attempts I made to quit was regrettable. She has deliberately slowed down the process of getting me fully independent knowing that once I get through with that, I will be gone!

“The comforting thing I see in all of the shenanigans is her younger sister who lives miles away from us. She’s stunningly beautiful, humble and caring. She had confronted her sister over the manner in which she talks to me. At some point, she stopped visiting us because she said she cannot condone her sister’s behaviour. She’s so empathic and comforting to me. We do talk a lot and she knows that I desire her but she said it is a difficult game because her sister could give me serious trouble. I later discovered that her attitude was the reason she’s still single. Some suitors had walked out of her life due to the same reasons. By her parents’ arrangement, I’m the most feasible option and possibly the best answer to her question. The truth is that I’m thinking of how to escape unhurt and settle for her more reasonable and mature younger sister. They are word and opposite in character and the way they relate with people. Though she’s financially buoyant than her younger sister but I’m a thousand times comfortable with the good girl despite that. No matter what, I want to cause an upset in the family by porting with the little sister. Their parents will be handicapped as I simply swop their own choice with my own but still within the family. Ultimately, parental intervention will prevail over her to let go. But my issue is that the little sister is yet to fully consent to my proposal. It is in this area that I really need you to come to my aid. Tell me how to navigate my way through this tight thoroughfare of love. Kindly peruse my case and give me your most valued counsel. Thank you, sir.”

Every aspect of human life has both benefits and challenges. I believe in God as being the Ruler in the affairs of men especially those who commit their ways to His leading. Yoruba have a saying that God does some things for the purposes of another. I have seen cases where friends lost their boyfriends to their friends and such relationships have led to happy marriages.

One of such women contacted me in February last year lamenting how wicked and untrustworthy some friends could be. She was devastated and feeling gravely disappointed in friendship. I counselled her that if the guy was truly meant for her he won’t abandon her for her friend. I made her to believe that she might actually be the link fate needed to bring her friend in contact with her own husband. Reluctantly, she agreed and struggled within her heart to remain in friendship with the concerned friend. Barely two months later, she followed her neighbour to a church programme. According to her, the minister of God released a prophetic word that “Someone is here. You’re jilted by the man that proposed to marry you and that same man went to marry your close friend. Don’t be angry please. It was God at work. That man is not meant for you. Your own is coming, all your family members and friends including those we are talking about we congratulate you. God used you to answer your friend’s prayers in that regard. It is the Lord’s doing and it’s marvelous in our eyes. I congratulate you in advance.”

On her birthday that year, a man greeted her on Facebook and from there they started chatting and talking; months later, the friendship developed into a serious affair and as we speak, during her birthday some weeks ago, she lavishly displayed her photographs with her husband. That is God at work.

However, in this case, I don’t know how it will look like if a man that has been living with the elder sister will end up marrying the younger sister of the same parents. Maybe it may work for him but for morality sake, I think otherwise. Better still, I will advise that he should first get the little sister to accept his proposal before making further plans. It is sometimes suicidal to stay in marriage with someone you don’t love.

May God bless Nigerians as we earnestly pray for national deliverance from the yoke of internal colonization, political and economic servitude. Happy Independence!