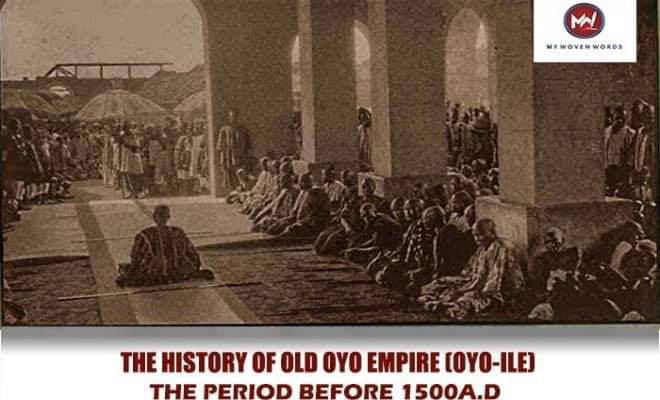 The Yorubas of South-Western and North Central Nigeria have come full circle in their chequered but tumultus history. Their ancestors have built a most enduring civilization in a long history of humanity.

They have founded, nurtured and grew kingdoms of reckoning and have within ancient and contemporary period, established a formidable Empire which at its zenith, sprang her tentacles beyond the territories that made up Nigeria. The rise of Oyo Empire from the 14th Century to an octopus military and economic power by 1700s shot her Imperial king, the Alaafin to heights feared and cherished beyond the pre-colonial borders of the Yoruba Country in Nigeria, to Idahomi (Dahomy) now the Republic of Benin and Angas of modern day Ghana.

The vast territories acquired through wars of conquest, migration and trade, provided the Alaafin, more revenues to his exchequer, more riches to flaunt, more powers of control and more subjects to subjugate. The influence of Oyo on distant territories meant more troops to beef up the charioted armies of Oyo enforce the sovereignty of the Alaafin.

The Are-Ona Kakanfo title was created in direct response to the demands of keeping the Oyo Military Machine more daring, effective and imperial. Holders of the title which literally conferred on them, the power of a field marshal were chosen based on the parameters of unequalled military tactics, a daring that was incomparable and a capacity to mobilise forces under his command for wars and victory. The Kakanfo title was created by Alaafin Ajagbo with its origin from the order of the Eshos; an elite military bodyguards of Oranmiyan Odede, the warrior Prince of Ife and founder of the Alaafin and Eweka dynasties of Oyo and Benin Kingdoms.

The Yoruba Nation bore different burdens, leaped in fortunes and regressed in progress according to the character and capacity of each of the Kakanfos, to protect Oyo Empire from internal security breaches and external aggression. In other words, Oyo profited from the disposition of each Are Ona Kakanfo that took office from 1700s.

Thus, when Aole, son of Alaafin Abiodun Adegoolu was crowned in 1789, the Kakanfo had assumed powers that were threatening, even to the throne of the Alaafin. Afonja Lokolaya, son of Laderin was domiciled in Ilorin, which at that period was a small town nested on the banks of River Awun, a tributary of the River Niger. Ilorin itself was founded by Pashin, his great grandfather. Afonja took the Kakanfo title almost by force. He had become so powerful and used his military exploits to turn the sleepy town of Ilorin into a Garrison headquarters to defend the Empire from the North-East of the Ibariba and Fullah territories.

The military ascendancy of Kakanfo Afonja was however, a period of political decay in the Empire which a succession of tyrannical Rulers had engendered. The fall of Oyo Empire could have begun when the Alaafin had his powers usurped by Bashorun Gaha who as the prime minister successfully mobilized the people against the tyranny of the Alaafins by rejecting them in quick succession. When the Aole tenure is copiously analysed, the import of this historical verdict is better understood.

The fall of Oyo and the anarchy that came with it, the disintegration of several towns and cities as well as the relegation of kingdoms that had flourished for centuries unwittingly prepared the grounds for an unhealthy power equation among the major ethnic Nationalities that formed the tripod on which Nigeria stands today.

Irredentism, passionately revered as an article of faith by the feudal Fulani hegemonists in the Northern part of Nigeria continues to determine their engagements with the indigenous Peoples of Middle Belt, North-East, South-West, South-East and South-South of the Country.

Can any interest in the Nigerian project ignore the vexed issues which the abrogation of Regional Administration unleased on the polity? No discerning mind will veer away from the damage caused by the General Aguiyi Ironsi’s unification decree which bred impunity of power and agradisement of resources by the minority ethnic Fulanis with antecedents that were not in any way indigenous, but that of migrants with eyes on native lands. Such exhibition of hubris to regard Nigeria as a conquered territory of Fulani jihadists has severely fractured the unity of different ethnic Nationalities and placed the country on an agonizing fast pace to destruction.

Self determination has replaced National Cohesion. The Citizens now think less Nigerian but more inclined to their ethnic blocks. The scenario of Nigeria’s evolution and her trajectory into a sovereign Nation did reveal much cleavages which times and circumstances have failed to fix. The events that led to a three (3) year civil war have become so accentuated in the last five (5) years that drumbeats of war are sounding so loud and drawing Nigerians more than before, to the path of succession each passing day.

It may not be an overstatement to see the Yoruba Agenda as an integral feature of a shaky-unstable Nation. Today, the Agenda has been taken to global heights and the over sixty-two (62) million Yoruba Ethnic Nationalities within and outside Nigeria now key into its noble ethos. What is left to be done? The second part of this feature will look into the connecting issues.

Olusola Ajiboye is a veteran Journalist and Media Consultant