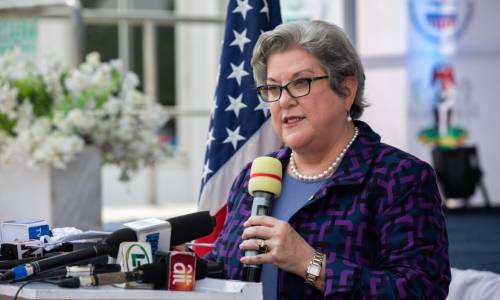 The United States of America, USA has expressed its readiness to help identify sponsors of Boko Haram and other terrorist groups wreaking havoc in Nigeria.

This was disclosed on Monday by the US Ambassador to Nigeria, Mary Leonard during a meeting with newsmen in the nation’s capital, Abuja.

When asked what would the US do to help the country identify the sponsors of terrorism in the country, Leonard said, “That is something we are very eager to partner Nigeria on.

“I have had at least three conversations in the last two months on this subject.

She dismissed the notion by some Nigerians that the relationship between Nigeria and the US would crash as happened in Afghanistan, stressing that the two countries have a strong bilateral relationship unlike that of Afghanistan.

She added, “I hear people making the analogy with Afghanistan a lot, it does not match up.

“When you listen to what President Biden said on how troops went to Afghanistan in the first place, it was because they were in a horrible tragedy, over 3,000 Americans were killed.

“That is a different construct. The sovereign nations who have had strong bilateral relations. I don’t actually think the two match up.”

Also speaking, the Commander, US Air Forces in Europe, General Jeffrey Harrigian, told journalists that the purchase of Tucano fighter jets was an opportunity to cement the US relationship with Nigeria as well as curbing insecurity.

He said, “The A -29 Super Tucano gives us an opportunity to reconnect our relationship with Nigeria”.

MaTaZ ArIsInG reports that the country is currently facing its worst security crisis birthed by the activities of terrorists groups and bandits who have been on rampage, killing unsuspecting citizens of the country.

Despite the surrendering of some of the insurgents to Nigerian troops following onslaught against them particularly in the northeast, the security situation in the region has remained unchanged.

The Citadel: In Defence of Pastor Tunde Bakare