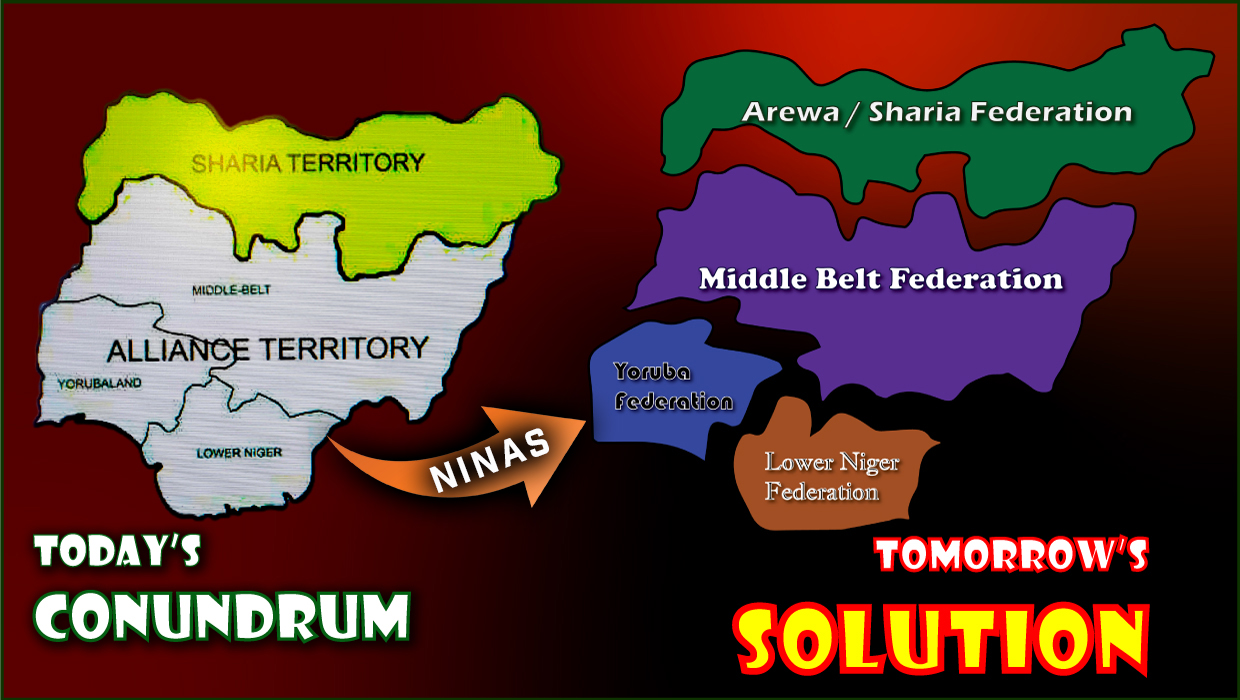 NINAS TO AREWA GROUP, YOURS IS A SINKING CALIPHATE

THE NINAS ALLIANCE HAS DEFEATED AND DECAPITATED THE 1967 CALIPHATE ALLIANCE UPON WHICH THE CALIPHATE HINGES ITS CURRENT CALCULATIONS IN TRYING TO ISOLATE THE IGBO BACK TO THE DOT-IN-CIRCLE STATUS.

The Fulani Caliphate is still counting heavily on their 1967 Alliance with the rest of Nigeria against the Igbo which is defined by the May 27, 1967 heinous 12-State gerrymandering, as the East Central State, (now fractured into the 5 Igbo States of the so-called “South-East”).

The confidence of the Charlatans and Mediocres who went to the “Federal” High Court in Kano to institute the Suit praying for an order to compel an “Igbo Secession Referendum” is built on the stupid calculation that the 1967 Caliphate-led Igbo-Isolation Alliance which included the Middle Belt, Yorubaland and the South-South AND which encircled the South-East 360 Degrees, is still holding.

Unfortunately for the distressed Caliphate, their Yoruba, the Middle Belt and the South-South who have themselves come under the Murderous Onslaught of the Invading Caliphate (Fulani) Militia, have embraced the Three Bloc NINAS Alliance that Isolate the Sharia Caliphate and so the Igbo which is now in the Lower Niger Bloc of that Alliance is no longer in the 1967 Dot-In-Circle Situation.

Too late in date for the obdurate Sharia Caliphate.

Their Title Deed, the so-called 1999 Constitution, has been completely defeated by the Joint Multi-Regional Action of the rest of Nigeria constituting the NINAS.

Alliance, by virtue of the December 16, 2020 Constitutional Force Majeure by the Nigerian Indigenous Nationalities Alliance for Self-Determination (NINAS) which is now heading towards the Enforcement threshold from the Sensitization and Mobilization that began December 2020.

A Nigerian Court Gives Reprieve To Malami, Amaechi, others as it voids Section 84(12) of Electoral Act; Ebun-Olu Adegboruwa, SAN Responds