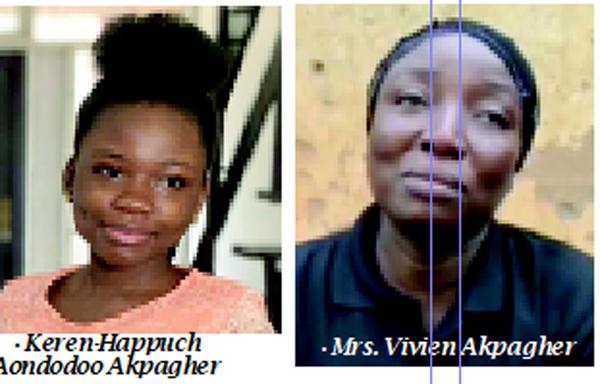 The bizarre circumstances surrounding the untimely death of Keren-Happuch Aondodoo Akpagher, a 14 year old SS1 student of Premiere Academy Lugbe, Abuja has continued to generate angry reactions from her loved ones including her heartbroken mother, Mrs. Vivien Akpagher who is demanding justice for her tragic death.

Keren-Happuch, a boarding student died on June 22, 2021 from complications arising from alleged serial sexual molestation by yet to be identified person or persons while in school.

Mrs. Akpagher who wept uncontrollably while her daughter was being buried on July 10, 2021 at Akpagher village, Mbatiav Gboko Local Government Area of Benue state appealed to the authorities to prevail on the school authorities to explain how a condom got stuck in her daughter’s private part in school which eventually led to the medical complications that claimed her life

She also appealed to the relevant authorities to fish out those behind the evil act that led to the death and dish them the laid down punishment to serve as deterrent in order to save other children from falling prey like her daughter.

With a heartrending cry of torment, Mrs Akpagher narrated to Saturday Vanguard how her daughter’s quest to acquire knowledge and the family’s desire to ensure that their girl child achieved her dream of becoming a successful woman was cut short by a yet to be identified molester.

In her account, the bereaved mother recounted how three days to her death on June 19, 2021 her daughter had complained of an eye infection and asked that she be picked by her parents for medical attention.

According to the heartbroken mother “Aondodoo was distraught when she learnt she was going back to school. And after over four hours of calling and texting the Principal and the Matron of the school who refused to release her initially saying she would have to stay in isolation for seven days on her return, they finally allowed her to follow me home.”

Mrs. Akpagher explained that she was initially not keen on taking her daughter home that Saturday but changed her mind when her school mother informed her that Aondodoo could not walk to school on the June 16, 2021 but was supported by two friends to write her test in tears.

“She took ill on Sunday night and was rushed to Queens Clinic, Wuse, Abuja on Monday and a discharge from her vagina was found to be condom. After a laboratory test her urine revealed dead spermatozoa. She died early hours of Tuesday from hyperglycemia triggered by sepsis resulting from the infection caused by the condom in her,” she stated.

Mrs. Akpagher who disclosed that three of her children attended the school said it was the first time the school transported her deceased daughter for treatment.

The agitated mothers also asked, “how did a condom get into her? Why was there dead spermatozoa in her urine? Why wasn’t I informed she was ill on Wednesday June 16, 2021 and why was she supported to class and not the clinic?

“Also the school authorities have not told me anything, rather they claim that it did not happen in school. I believe the school management have answers to the concerns and questions I have raised above.

“And so far, from all I know, the FCT Command of the Police is not carrying out investigation into the matter and I demand that the matter be thoroughly investigated and justice served so that no other child would be sexually molested in that environment or elsewhere,” she added.

Meanwhile, an official statement by the management of the institution made available to Saturday Vanguard by the Principal, Mr. Chris Akinsowon exonerated the school from the unfortunate demise of their student.

The school also claimed that information made available by her mother when she was offered admission in 2019 indicated that she was diagnosed of Type 1 diabetes.

The statement made by the school in a bid to exonerate itself read, “on Thursday, 17th June, 2021 Keren Akpagher visited the school’s clinic with a complaint of redness of the eye. Her mother Mrs. Akpagher requested that she should be taken to see an Ophthalmologist on Saturday June 19, 2021 and she was taken for the appointment in the morning of that same day.

“On her return to the school on that same day (Saturday), her mother further requested to pick her home because Keren insisted on going home for the weekend. An exit was granted and she went home with her mother an a healthy condition.

“On Monday morning June 21, 2021, we learned she became ill and was hospitalized. On hearing that as a school, we mobilized immediately and visited her at the hospital, Queen’s Clinic Wuse, Abuja.

“It was heartrending when we heard of her demise the next day Tuesday June 22, 2021. Before her death, Keren Akpagher was an easy-going student who never appeared before the Academy’s Disciplinary Committee on any issue.

“We wish to clearly state that we will cooperate with the Police as we are committed to ensuring that the actual cause of Keren’s death is fully determined. At this point, we enjoin all interested parties and the public to assist the investigation process.”

Reacting, the Executive Director, Child Safety and Protection, Health and Education Advocacy Group, ChiSPHEAG, Debby Chinemerem urged the police to do a thorough job in the matter and “ensure that justice is served.”

According to Chinemerem, “we are yet to wrap our heads round the information coming from the school at the moment. Nigerians are not interested in the tale of the girl being diagnosed of Type 1 diabetes.

“We want concrete and convincing explanations as to how spermatozoa found its way into the girl and how the condom that triggered the sepsis in her vagina got there. The school should give us explanations and not the vague statement that is neither here nor there which could not counter the issues raised by the bereaved mother.

“Justice should be done and must be seen to have been done in the matter to serve as deterrent so that the soul of the innocent girl would rest peacefully and her bereaved parents would also be consoled.”

HE PREDICTED IT AND IT HAS COME TO PASS

I NEVER KNEW I WILL GROW OLD TO BE 70 – AKURE PRINCE, LANA ADESIDA

2023 Elections: Nigeria Must Go Back To 1960 Constitution To Avoid A Collapse – Afe Babalola

Those insulting me over health status have no brain –Tinubu