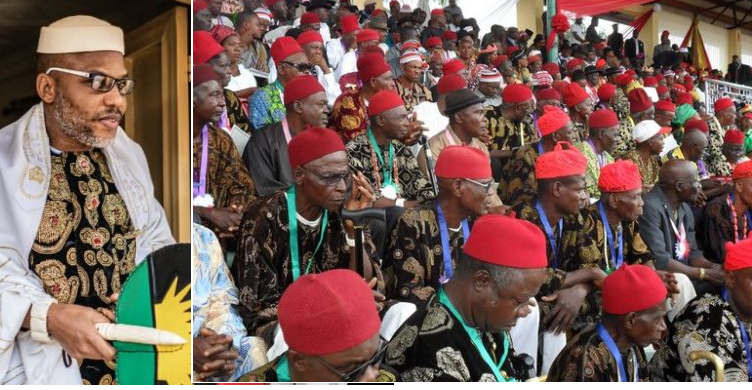 The highest Igbo Socio Cultural Organisation, Ohaneze Ndigbo and the Nnamdi Kanu The Leader of Indigenous People of Biafra (IPOB)

The leader of the Indigenous People of Biafra, IPOB, Nnamdi Kanu has been arrested and repatriated to Nigeria.

MATAZARISING learned that Kanu was intercepted and arrested by security operatives in an African contrary to widespread reports that he was picked up in the United Kingdom.

Kanu was brought before Justice Binta Nyarko on Tuesday and remanded in the custody of the Department of State Security Services. Kanu’s arrest was announced by the Attorney-General of the Federation, Abubakar Malami.

The AGF disclosed that Kanu was picked up after collaborative efforts by security agencies. Kanu was brought back to Nigeria to continue his trial after disappearing while on bail regarding an 11-count charge against him.

Malami disclosed that the government was able to “intercept the fugitive Kanu on Sunday 27th day of June 2021.

“Nwannekaenyi Nnamdi Ngozichukwu Okwu-Kanu, born 25th day of September, 1967 at Afaraukwu, Abia State is a holder of Nigerian Passport No. A05136827 first issued 17th October 2013 at Festac, Lagos”, he said.

Kanu is being accused of instigating violence and killings, especially in the South-East. The attacks, he noted, resulted in the loss of lives of civilians, policemen, military and paramilitary forces.

Ohanaeze in a statement made available to POLITICS NIGERIA on Tuesday afternoon, praised the arrest of Kanu adding that it has brought an ‘end to violent agitations’ in the country.

The statement read: “Ohanaeze Ndigbo calls for calm and cautioned Igbos to desist from any form of protests and processions that will bring more catastrophe for Southeastern Nigeria.”

“The re-arrest of Nnamdi Kanu the leader of IPOB is the beginning of the end of violent agitations in southeastern Nigeria and a lesson to others that,” deviation from the nonviolent agitations contradicted what Igbos are known for, and self-determination should not be used for purposes of fortune and fame-seeking”.

“Nnamdi Kanu’s refusal to adhere to the advice of Igbo leaders, Elders, and Political leaders is the outcome of what had befallen him, he made a lot of enemies especially those that would have saved him and Federal Government will never lose grip on him again. We don’t think that any Igbo leader will stick out his/her neck for him, his re-arrest will eventually bring peace and stability to the region and averted another civil war that was raging on.”

“Federal Government should handle the situation carefully because his large followers of IPOB wouldn’t resort to violent revolts, his trial should be strictly based on the laws of the land, they shouldn’t kill him because it will destabilize the entire country.”

2023: What I Told Tinubu’s Wife When She Asked Me To Campaign For Her Husband – Dele Momodu

SUNDAY ADEYEMO IGBOHO…returning to the basics.

Sunday Igboho: There Will Be The Greatful And The Ungrateful…

PDP to Shettima: You frustrated Jonathan war against Boko Haram