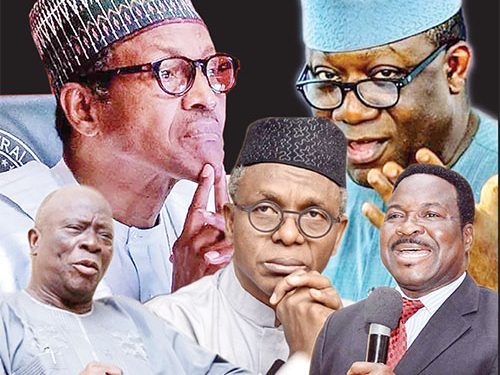 Restructuring? Naa! We Are Tired of Being Punked.

Restructuring: An Idea Whose Time is Gone

A MUST READ by Michael West

Whoever is still campaigning for restructuring to happen under this Fulanised government is short-sighted and not coming to terms with the reality in Nigeria today. For obvious reasons, restructuring cannot happen under Gen. Muhammadu Buhari-led government. The anchor reason is that restructuring is believed to be inimical to the interests and agenda of Fulani imperialists. The Buhari administration will rather violate any known moral and legal precepts to keep the status quo than to support an arrangement that would ease the vice-grip hold of the imperialists on the levers of power in Nigeria. They would prefer to manipulate the system in a way that would perpetuate them in control than to reasonably agree to any mutually beneficial arrangement that would guarantee equity, fairness, justice and true federalism.

This is why I feel for the Yoruba apex socio-political group, Afenifere and its allies that are still calling for restructuring that may never come. In its recent communique issued in support of the southern governors’ position on the ban on open grazing and demand for restructuring among other things, Afenifere revealed that it has been calling for the restructuring of Nigeria to ensure true federalism way back since 1953. Demanding for a thing for a whole 68 years! Wow! Yet, Afenifere is still unrelenting even under the leadership of a man who has never hidden his disdain for the agitation. This is a sheer waste of time, energy and resources.

In 2015, Buhari did not mention the word “restructuring” for once during his campaign. He knew he didn’t like it and he won’t promise what he will not do. It was Senator Bola Tinubu and his co-travellers that were saying all manner of things to deceive Nigerians into buying lies as campaign promises. In 2018 when the furore over the issue of restructuring became deafening, Buhari asked Governor Nasir El-Rufai committee to look into the restructuring matter and make recommendations for possible implementation. Buhari made the move as a strategy to douse the tension. As at today, El-Rufai’s report is still on the shelf gathering dust.

Everybody in Nigeria knows that this government is largely run by a cabal of some unelected people around the President. One of them is the Sharia law graduate who is Buhari’s Attorney General and Minister of Justice, Abubakar Malami. Whatever you hear from Malami, just take it to the bank as the authentic opinion or position of the President. When he came out strongly against Amotekun security initiative in January last year, despite the unprecedented tongue-lashing he received for his uncouth and illegal utterances, tacitly, the cabal still had its way as Amotekun was not only denied the right to carry standard weapons and the power to prosecute, our lilly-livered governors also traded the security outfit away on the altar of politics behind the scenes in Abuja. Until recently, Amotekun was more of a camouflage than a real security outfit.

READ ALSO: Why Chief M.K.O Abiola Was Killed Why Many Support The Breakup of Nigeria SG Ban on Open Grazing ‘Illegal’, Malami: Aketi & Other Nigerians React

When Malami criticized the southern governors for daring to ban open grazing across the region, apart from the fact that Governor Rotimi Akeredolu has been vocal in recent times in responding to the excesses of Abuja, he returned Garba Shehu’s punches with more devastating salvos. Malami said it was wrong for the governors to say so. He actually said the ban was “illegal” but his learned colleagues and seniors at the bar have told him to return to the classroom to relearn the basic law of human rights he’s trying to murder. Expectedly, what Malami had earlier said was what Garba Shehu eventually released as the official position of the presidency.

Likewise, on restructuring, the all-knowing Malami had said barely 24 hours after the southern governors’ declaration that Buhari will not have anything to do with it. He tasked the governors to begin restructuring from their own end before they can ask the President to do his own. In effect, Malami was telling us that agitation for restructuring amounts to nothing as far as Buhari administration is concerned. Besides, the change agent that would have made the demand possible is also on the same page with Buhari’s cabal on the issue. The Senate President Hamed Lawan also frown on the demand for restructuring. Echoing what Malami had said earlier, Lawan said, “I believe that as leaders, those of us who were elected must not be at the forefront of calling for this kind of thing. Because even if you are a governor, you are supposed to be working hard in your state to ensure that this restructuring you are calling for at the federal level you have done it in your state as well.” For toeing Malami’s line, Lawan was saying restructuring is a ‘no-go-area’ for the 9th Senate which he presides over.

Penultimate Sunday, the All Progressive Congress, APC, leaders and governors in the southwest met in Lagos over the state of the nation. Without disappointing their critics, nothing tangible emanated from the hyped meeting. It was so disappointing that they tersely mentioned the havoc caused by the rampaging Fulani herdsmen and their kidnapper kith in the southwest. They spoke tongue-in-cheek about the invasion of Yoruba homeland by Fulani in their land grabbing and ethnic cleansing onslaughts. Trading off their people’s lives and ancestral land because of political ambition in the name of national unity is sacrilegious. Who does that? Fulani don’t care whose ox is gored when defending their own people and ethnic interests. We are all witnesses to how the presidency has become the defender-in-chief of herdsmen and their cows while Fulani governors dropped the garbs of civility and office to speak out for their nomadic people even when they do wrong. What has come over Yoruba people especially the political class? Why do they talk like slaves?

For the Yoruba APC leaders to reiterate the call for restructuring is shameful. If they lack morals to know what is right for them to say, they should not embarrass themselves further. Maybe they thought we have forgotten. The same restructuring was number one in the campaign manifesto of the APC in 2014/15. They promised Nigerians that what the People’s Democratic Party, PDP, government lacked the will to do their party will do it. It is six years now, we are still talking about restructuring. It is the same Tinubu caucus that led the campaign at the time.

I think Nigerians should scorn any politician that will use restructuring as a campaign issue again. They have taken us for a ride for too long. They are also banking on palliatives and money at polling stations to buy their way into office. They have perfected arrangements to compromise security agents and the judiciary including INEC officials to ensure their victory come 2023. Men propose but the almighty God disposes. Let’s wait and see what will happen between now and 2023 if Nigeria manages to survive till then.

READ ALSO: Herders’ Threat: What Is Going On In Nigeria Is Unconstitutional, Clark Tells Buhari https://matazarising.com/2021/06/15/herdsmen-invasion-stop-panicking-be-ready-to-fight-your-assailants/ RESPONSE TO THE FULANI THREAT TO OKOWA ON OPEN GRAZING BAN BY THE SOUTHERN GOVERNORS.

Back to Afenifere and those mouthing restructuring, it is a sad reality that it is an idea whose time has passed. There are compromised leaders in the south who “speak” for their people in the daytime but are in bed with the oppressors of the same people at night. They are mandated to keep their people under control so that things won’t go awry. Could that be the reason why some of the elders scare the determined people with tales of wars, famines and the power of government to “kill” as narratives to keep them in check? Obsolete narrative like restructuring is allowed to dominate national discourse and the media space as a diversionary approach from allowing things to snowball into wild agitation. No wonder the southern governors, Yoruba APC leaders and regional leaders are all on the same page knowing full well that restructuring will never materialise under this government.

The great Zik, Late Nnamdi Azikiwe said one cannot be doing the same thing the same way over and over again and expect a different result. If Afenifere has been calling for restructuring for the past 68 years and it does not think it is time to review its position, the group maybe preparing a fertile ground for the emergence of another leadership for Yoruba people whose agitation will be in sync with the yearnings, aspirations and thinking of the vast majority of the people. And this will devastate the calculations of self-serving political leaders whose charity only begins from outside and not at their home. Markets went up in flames in Yoruba land but they can donate to burnt markets in Arewa. Their people are dying of hunger here, across the Niger was their choice places to feed the poor. Yoruba people are now knowing their real leaders from dealers as the Nigerian nation unravels.

Afenifere and its allies should embrace self-determination agitation as a realistic approach to liberate their people. I feel it is better we break the retrogressive yoke of exploitation and forced unity so that we can dwell in the sanctuary of our new nations than remain in the mortuary of Fulani imperialism. Changing tactics is not a sign of weakness or defeat, rather, it may likely bring the imperialists on their knees begging for restructuring. This time around, it won’t be according to their own terms but as it would deliver true federalism to the nation.

More than anything else, I think the hoopla was not actually about the governors’ pronouncements on the ban on open grazing and restructuring; it is more about the guts that Southerners display that worry them. Otherwise, why should open grazing that was initially banned by northern governors in February 9, 2021, should become an issue? I’m inclined to believe that their ‘born to rule’ ego is bruised and subdued by whatever southern leaders and their people say or do. To corroborate this line of thought, when the Sultan, Alhaji Sa’ad Abubakar III, said “seven to eight of every ten kidnappers are Fulani,” everybody kept mute but when Southerners expressed similar opinions, they were accused of “ethnic profiling.” Even their collaborators in the south were more vocal as they condemned any statement that singled out Fulani for any known crime. This is appalling! The fact that Southerners have the courage to decide for themselves is their major headache. This is part of the reasons we should go our separate ways. Let those who claim they have invested so much in the Nigerian project go and recover their investments. Anybody preaching “one Nigeria at all cost” should be ignored. If Britain could quit the European Union when it no longer served her interests, while should we be ready to die to keep Nigeria which is a creation of Britain?

It is time for southern elites to confront and resist political subjugation, economic pillage, ethnic cleansing and mental slavery. They should unbundle the dubious national unity sustained by the tiny cabal that holds the rest of the nation down to their medieval mentality.

Yoruba group to Buhari: Go after sponsors of Insurgency disclosed by Commodore Olawunmi

SOUN: Head of Kingmakers Clears Air Over Allegations, Explains Why Ghandi Was Selected

State of emergency in Anambra – Buhari denounces Malami. No such thing