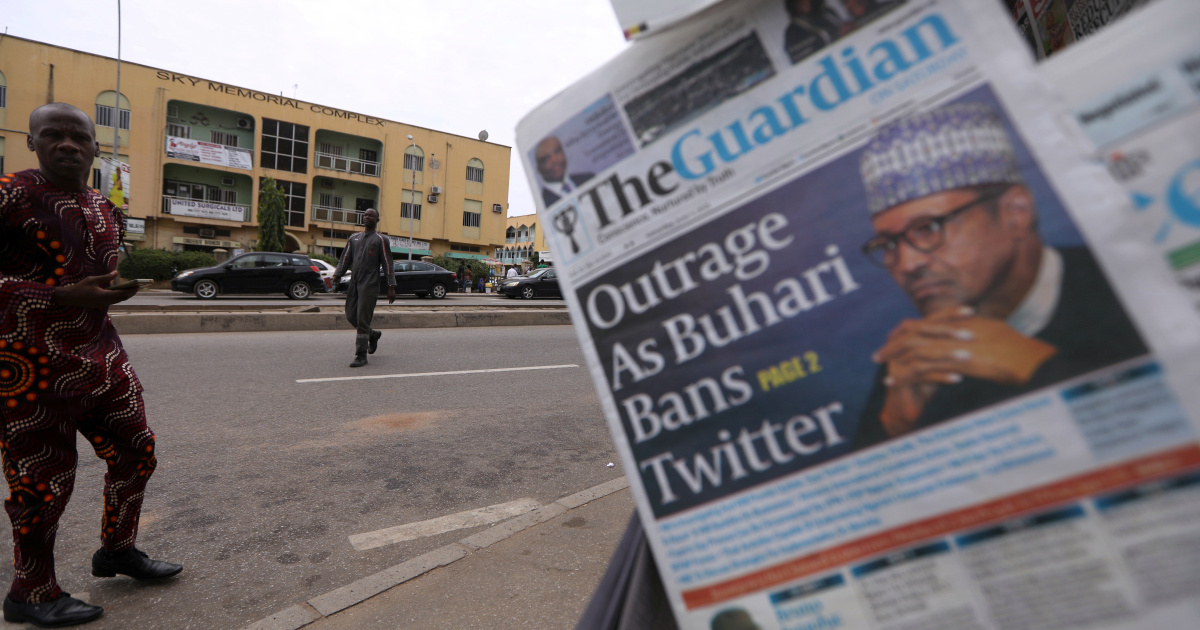 As a man looks at newspapers at a newsstand in Abuja, Nigeria, the Headline Speaks for itself

I woke up some mornings ago to see that Twitter was trending with multiple terms related to the state of affairs in Nigeria.

I found this rather odd and here’s why.

I use Twitter more as a listening tool, to keep my finger on the pulse of things.

One look at the trending topics, and you could have a summary of current affairs for the day.

When I left Nigeria last year, I updated my location on the Twitter app to ‘United States’ as I now wished to be updated on current affairs in the US.

Consequently, whenever something significant happened in Nigeria, I learned of it rather late and typically by word of mouth because I could only see US trends.

And so when I woke up this morning to multiple Nigerian terms on the trending section, I thought the app was experiencing a glitch, showing me trending topics in my former location, Nigeria.

After a few seconds, I laughed as I realised what the real situation was. There was no glitch after all.

Here’s the breakdown of what happened.

Whenever something tragic or contentious occurred in Nigeria, the citizens would tweet about it, and the topic would trend – TO NIGERIANS.

This meant that even though the complaints and agitations of the citizens were being posted to the public social media platform, the issues seldom ever registered as the trending topics of other countries.

However, there was a twist here which leads us to the Law of Unintended Consequences.

The Nigerian Government banned Twitter and this led the mammoth Nigerian youth population to download VPNs to bypass the ban.

On most VPNs, the United States is the default or preferred location.

And so millions of Nigerians who would normally tweet and register their discontent as the trending topics of Nigeria were now registering the issues on the trend list of the United States.

Americans woke up today confused by terms such as ‘IPOB’, ‘Buhari’ and ‘Malami’.

If the Nigerian government had not banned Twitter, the displeasure of Nigerians would have been localised.

In the wake of the ban, the displeasure of Nigerians was being broadcast to the centre of the world through VPNs, creating global awareness for a matter that would have otherwise remained local.

Most Nigerian VPN users didn’t plan for this effect. It was just an unintended consequence of using VPNs, albeit a welcome one.

Another unintended consequence here is that Nigerians may have now learned how to ensure that topics of agitation are registered on the trends lists of the United States – by mobilizing Nigerians to tweet via VPNs with the US as their virtual location.

The Law of Unintended Consequences can be avoided by utilizing a thinking tool called Second-Order Thinking.

Second-Order Thinking posits that there is more than meets the eye when solving problems and that by solving one problem, we may inadvertently create another problem.

We must therefore rigorously apply Second-Order Thinking and even third-order thinking to arrive at an ecological solution.

I’ll explain this using another lesson from history.

Back when the British ruled India, they faced a problem with a rising population of venomous cobras in Delhi.

To solve this problem, the British colonialists launched a bounty program, offering a cash prize for every cobra that was killed.

All the residents had to do, was to kill a cobra and present its body to the British government and claim the reward.

However, the business-minded Indians devised a plan to ‘optimise’ their rewards – they would breed cobras privately, kill them, present the dead cobras to the British and collect the cash reward.

The British were initially delighted to see that cobras were being killed in large numbers.

On the surface, the bounty program appeared to be a raving success – 1ST ORDER THINKING.

The British soon found out about the breeding operations and terminated the bounty program – 2ND ORDER EFFECTS.

This now meant that the Indian snake breeders were left with many snakes that could not be sold, and so they set them all free.

There were now more cobras all over Delhi after the bounty program than when it was first started – 3RD ORDER EFFECTS.

What does this mean for you?

As with the stories of the Twitter ban and the British bounty program, we must seek to solve problems by seeing the whole landscape rather than what is readily apparent.

We must consider not only the First Order Effects of our decisions but also their Second and even Third Order Effects.

This overarching strategy is called SYSTEMS THINKING, and Second-Order thinking is just one component of it.

Let’s look at another hypothetical application of this powerful thinking tool.

Say you were the Founder/CEO of a Billion Dollar corporation and one of your founding executives was found to be engaged in fraudulent activity.

What would you do?

Well, a First Order approach to this problem would be to simply fire this individual.

Second-Order thinking would examine any potential consequences of dismissing this person.

On further investigation, you may then realize that this person may choose to express their disgruntlement by joining a competing organization and use company secrets to strengthen your opposition.

Of course, you could go to court, but your lawyers graduated from Harvard Law and would charge millions of dollars to duel with your adversary over the coming months and years.

Considering the cost of the Second Order effects of a straight dismissal, you may wish to act ignorant of the act of fraud and do something else instead.

Create a small office in a faraway country which is inconsequential to overall brand image and profitability.

Puff up his ego by offering him the role of Country Manager or ‘General Manager – Diaspora Relations’.

This fraudster would feel valued and stay on your side while being tactically stripped of the ability to continually perpetrate fraud.

You solved the First Order problem of fraud, cancelled out the chances of future fraud and potentially saved the company millions of dollars in legal fees.

This strategy is used at the highest levels of power – across politics, the mafia, business and even organized religion.

Read this a couple of times over and make your notes on how this can offer solutions to past and future obstacles in your life.

As Solomon famously wrote, “For wisdom is a defence, and money is a defence: but the excellency of knowledge is, that wisdom giveth life to them that have it.”​

The Baba Ijesha’s Sexual Abuse/Molestation Saga – It’s Not A crime To Be Female.

What Is Jesus Doing in Heaven For the Believer Right Now? (Part 2)