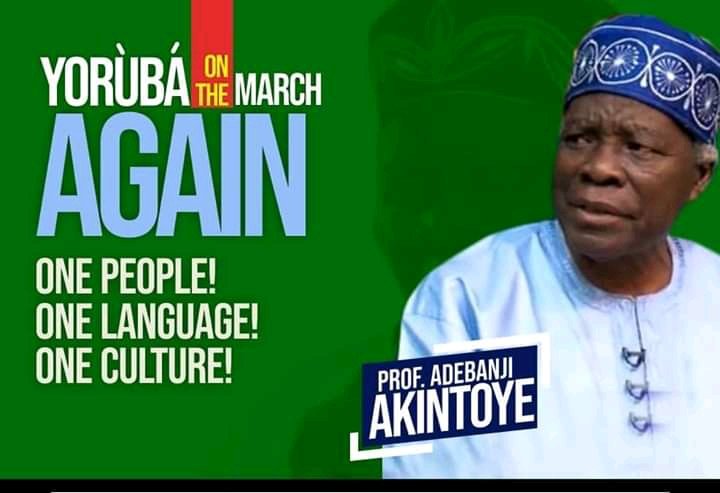 Professor Stephen Adebanji Akintoye is absolutely the best to lead and to speak for the Yorubas on our quest for Autonomy from Nigeria.

He sure has the fire in his belly the eloquence and the knowledge base and the intellectual gravitas and stature as a former University Orator to persuasively and convincingly make the case better than any other Yoruba man dead or alive with the possible exception of Pa Awolowo himself being an attorney by profession.

A Federal Government under whose tenure a Governor and a power broker from the Northern Geopolitical Zone was bold enough to suggest that History should be taken out of the Educational Curriculum of schools from the secondary to the tertiary level in Nigeria cannot appreciate the value and the pedigree of a priceless scholar like Professor Banji Akintoye.

“Eni ba m’oyi Wura la nta fun” it is he who knows the value of a Diamond that would ever seek to buy it.

I have been knowing Professor Akintoye since he graduated in 1961 as the best student in his class in the Faculty of History from the premier University of Ibadan which was at that time affiliated with the great University of London.

I knew the learned Professor from his days as a Lecturer at Ibadan and at the great University of Ife now named after his first Chancellor and the first Premier of the old Western Region, the one and only Chief Obafemi Awolowo.

I do know that the Prof had become the Director of the Institute of African Studies at the Obafemi Awolowo University and was a visiting Professor to few Universities in Africa and a frequent visitor to many World Class Universities as an authority in African History.

He was a Professor Emeritus of African History at the famous Temple University in Philadelphia.

Before then he had written so many books and had published so many research papers and articles in international journals around the World.

During his sojourn in the United States he led the move to establish one or two Yoruba Organizations dedicated to promoting Yoruba Culture and traditional values around the World.

It was part of his activities in those organizations that informed his being invited to lead the Yoruba World Congress and his initiative along with others in that Movement to enroll and to have the Yoruba Nation registered, certified and now recognized as the 45th Member of UNPO, an affiliate of the United Nations which had Sudan, Eritrea and so many breakaway countries around the world attain their ultimate goal for independence.

The Professor was inspired and motivated by his close relationship with Pa Obafemi Awolowo as a distinguished member of the Obafemi Awolowo Think Tank, to go into partisan Politics in Ekiti and he ended up being elected the Senator representing Ekiti Central in the Federal Parliament in the Third Republic.

I cannot think of any Yoruba leader of consequence who is better prepared to lead the Yoruba Quest for full autonomy from Nigeria. Not one!

It is always a joy to listen to him discuss Yoruba History and how the Oodua Nation has been tested and proved, and why we would be selling ourselves short and holding our progress to ransom if we continue to hold on to a counterproductive marriage of convenience or expediency which has outlived its usefulness and has done the Yorubas more harm than good, all things considered.

The Yorubas cannot be luckier to be led by a leader as distinguished and knowledgeable as our one only Professor Banji Akintoye who at 86 is still as agile and brilliant as most scholars half his age.

He is highly committed and goal-driven and willing and ready to sacrifice his own life to get the Yoruba Nation to become a reality in our own life time.

I could not help but shed a few tears as I listen to the Professor explain in the in one of his videos, which I could only compare to a similar video on Osagyefo Kwame Nkrumah making the case case in 1955 at the Lancaster House in London as to why Ghana the lone star should become the first country in West Africa to gain independence from Britain in 1957 three years ahead of Nigeria, the big for nothing Elephant.

Reasons Why Oodua Nation will excel