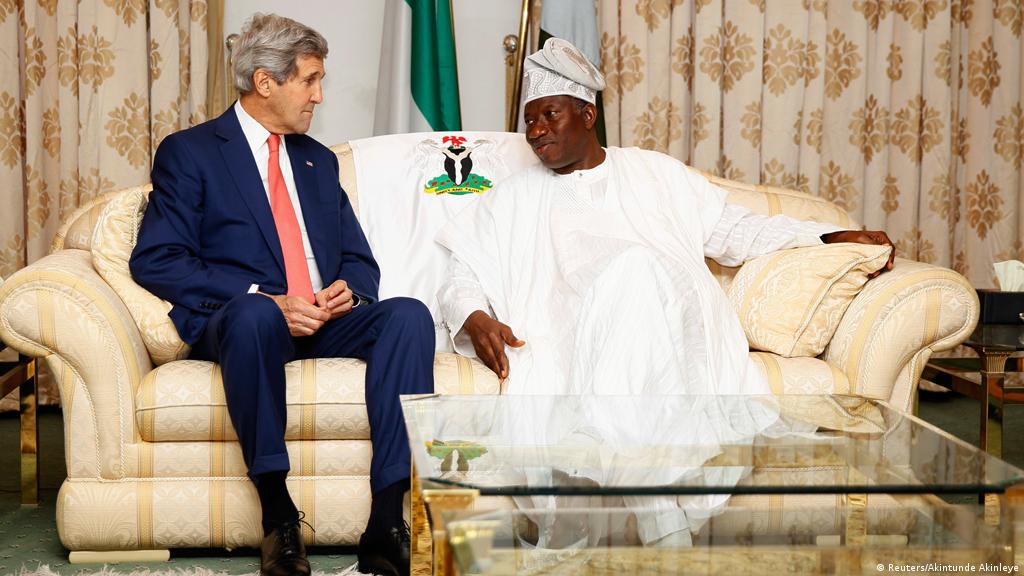 Buhari Makes Jonathan Look Like A Saint. How Nigeria Has Fallen.

The sulking and the murmurings against Goodluck Jonathan started with Muhammadu Buhari in 2011. It grew to loud grumbles in mosques across Northern Nigeria in 2012 as Goodluck Jonathan doubled the payouts and the efforts to end the Boko Haram insurgency before the 2015 elections.

Northern Muslim opposition to the rule of a Southern Christian was gathering pace to reach a cataclysm before the 2015 presidential election. And the rallying cry was that Christian soldiers were killing Muslims in the Northeast. The Chiefs of Army Staff in the period was first Lt. General Azubuike Ihejirika and Lt. Gen. Kenneth Minimah, both of the old Eastern Region like President Jonathan.

And then the elite of the North spearheaded by a gang of three musketeers discovered that it can actually mobilize Northern public opinion and use the threat of terror attacks in the Northeast as both propaganda and prop to inspire fear and dread of Southern Christian domination and win the presidential election for Buhari against an incumbent Southern Christian Jonathan.

Then entered the three Northern musketeers, Fulani irredentists of the worst kind. Attahiru Jega, then Chairman of INEC, Lamido Sannusi, Governor of the Central Bank and Nasir Ahmad el-Rufa’i now Governor of Kaduna state. They had many clandestine meetings at Asokoro in Abuja on ways to use their hold on vital national institutions to push Jonathan out of the Presidency for the Fulani candidate, Muhammadu Buhari.

These arrowheads of a Northern Muslim pushback against President Jonathan then went to work to formulate the grand plan for the removal, for the first time and through a rigged election process, the incumbent president of Nigeria.

Lamido Sannusi provided much of the financing from the Central Bank without accounting to anybody. As a distraction and a diversionary tactic, he created a false narrative of the theft of forty nine billion dollars from the treasury by the Jonathan Government.

Jega, all by himself, designed and implemented the rigged voter electronic identification system and database that wouldn’t work even for President Jonathan and was only implemented in Southern Nigeria during the 2015 elections.

Nasir el-Rufa’i went for the security jugular, heading the mobilization of both the Mujahidin across Africa and the terror groups in the Northeast, without their knowing the endgame, to join in the plan to oust Jonathan. They were all made to think that it was a grand plan to implement the long awaited jihad in Nigeria and to establish an Islamic Government based on the shari’a.

Massive arms purchases from the Middle East were ordered and their shipment coordinated by Nasir el-Rufa’I and Lamido Sannusi who is on first name terms with the military brass and political elite of Sudan. Arms caches were routed through the ports of Sudan, passing through East Sudan to southern Chad and then to Boko Haram.

Keen observers will recall that suddenly in 2013, we were seeing pictures of Boko Haram in convoys of brand new Toyota Hilux light trucks mounted with 109 mm guns and howitzers yet unseen with rebel forces and menacing Nigerian troops in the Northeast.

It was all for Buhari and all about Buhari’s ambition to be president of Nigeria. Buhari’s sole agenda was made clear early on, to enthrone Fulani to political and economic power and make Nigeria the home of all Fulani across Africa. Fulani have long exploited Islam as a pretext and rallying platform to achieve political ambitions for the advancement of their ethnic group. And it always worked.

The garb of jihad and Islam was considered and given to the project to cloak the real intendment of pushing Buhari a Fulani to the presidency and accomplishing the task of making Fulani the master race and Nigeria the home of all Fulani.

Buhari’s agenda was minimalist and simple in intention. After all he is a man of little thoughts. But in order for it to appeal to the broad sections of the Muslim Umma and the Mujahidin across Africa to fight for the cause even with money flowing from the Central Bank of Nigeria, the plan for Fulani supremacist enthronement in Nigeria had to be given the cloak of Islamic jihad.

But then the North had to resolve the conundrum and threat of Boko Haram. The generality of Northern Muslims are not opposed to the underlying principles driving Boko Haram and its breakaway factions.

The strong opposition to Boko Haram, Ansaru and ISWAP by the Northern Governments and traditional establishment is because they are inspired, headed and dominated by Kanuri and therefore threatens Fulani oligarchy.

Although Boko Haram and the other groups are Sunni Muslims as are the Fulani and the entire superstructure of Muslim Northern Nigeria, the dominance of Boko Haram, Ansaru and ISWAP by Kanuri ethnic group threatens to upend Fulani domination of the North and destroy the stranglehold of the Fulani on the religious, political and economic establishment of the North and Nigeria.

Boko Haram is a major threat to arm the talakawa of Northern Nigeria outside the control of the Fulani oligarchy. That is anathema to Fulani.

What this means in practical terms is that if Boko Haram or its factions are allowed free reign, Islamic power and not Fulani power will be established. This is unacceptable to Fulani.

So the entire Nigerian military complex is deployed in the Northeast to defend the Fulani hegemony in Nigeria against Boko Haram and its splinter groups.

And this is the uniquely Nigerian irony. The political and traditional establishment of the North have sent the army to destroy Boko Haram but Boko Haram was part of the forces used to undermine the Jonathan Government and install a Fulani as president. Now Boko Haram is now seen by the Fulani establishment for what it truly is, a direct threat to its own very existence.

Against Fulani interests, Boko Haram is growing in popularity among the Hausa elite and Talakawa of Northern Nigeria and both sides are now in conspiracy to win over the Muslim North against the Fulani.

Both Boko Haram and Muslim Northern soldiers see Southern and Christian soldiers as “devil’s” standing in the way of realizing their ambition through killing too many of their “brothers” in Boko Haram.

But without the presence of the Southern and Christian troops in the Northeast, Boko Haram will overrun the Muslim North and Fulani hegemony will end. Fulani aristocracy and their chokehold on the Nigerian political and economic establishment will cease to be. This is why there is a growing support in the Muslim North particularly among the Hausa for Boko Haram and the reason for the clandestine support for the terror groups. It is also why Southern soldiers are being betrayed and shot at by Northern soldiers for “killing our brothers”.

Increasingly, Southern soldiers who now know that they are regarded with lethal hostility in the battle areas and are being killed everyday by their own troops are now removing themselves from the fight and many are leaving the armed forces altogether.

But Southern and Christian people are unable to make political capital out of the Boko Haram war unlike the North would have done if they were in the position of the South.

The day Southern and Christian people threaten to order their soldiers out of the Boko Haram territory, the entire politics of Nigeria will reset, Fulani will capitulate and Nigeria as we know it today will unravel.

Both Boko Haram and Muslim Northern troops believe that Southern and Christian Nigerian troops are standing in the way of a united Islamic Northern Nigeria and are being killed by both sides for it. Their withdrawal will help achieve a unity of purpose between Boko Haram, their factions and Nigerian Muslim soldiers in the realization of a new Islamic Caliphate across Northern Nigeria.

The Yoruba and Igbo despite their size and pretensions to good education and civilization cannot conceive and implement big political ideas, concepts and plans and follow through. The three musketeers of Nasir el-Rufa’I, Moddibo Sannusi and Attahiru Jega were able to plan big and do big for the North to bring Nigeria to this sorry pass. It is left for the South to exploit the failures of their actions to bring Nigeria back to even keel.

Fulani are not the fanatical Muslim fundamentalists and ideologues that most people think they are. Across Africa, there are millions of Fulani who are Christians. Islam only serves the political purpose of domination for the Fulani in Nigeria.

To give the project more urgency, create mayhem and give the impression of imminent war and thereby scare Goodluck Jonathan out of Also Villa, terrorists, desert marauders and mujahedin from across Africa had to be recruited and mobilized into Nigeria.

It was never about Islam and never will be about Islam. It is about advancing Fulani hegemony in Nigeria. Northern Muslims will tell you that Fulani know very little about Islam and do not observe even the five basic prayers of the day.

Fulani don’t own Islam and didn’t bring Islam to Nigeria. Islam was a fully established religion in many Nigerian communities before the migration of Fulani into Nigeria. There were established Muslim communities in Nigeria long before the arrival of Fulani late in the eighteenth century. Other ethnicities don’t use Islam to advance their political ambitions, except Fulani.

The South and Middle Belt has to make the bold move as a group to seize the political initiative in Nigeria today and speak for the dying men being killed by both sides of the war.

Southern, Middle Belt Christian kinsmen are dying like flies in the war against Boko Haram and it’s factions. It is sheer irresponsibility to abandon these men who have no one else to speak for them than their kinsmen and fellow Christians. Soldiers are forbidden to talk to the Civil population on matters of their operations.

The Fulani have bitten much more than they can chew and they are choking with corn.

Your turn Southern and Christian Nigeria.

North-East has lost $6.9bn in infrastructure to terrorism – Gov Zulum