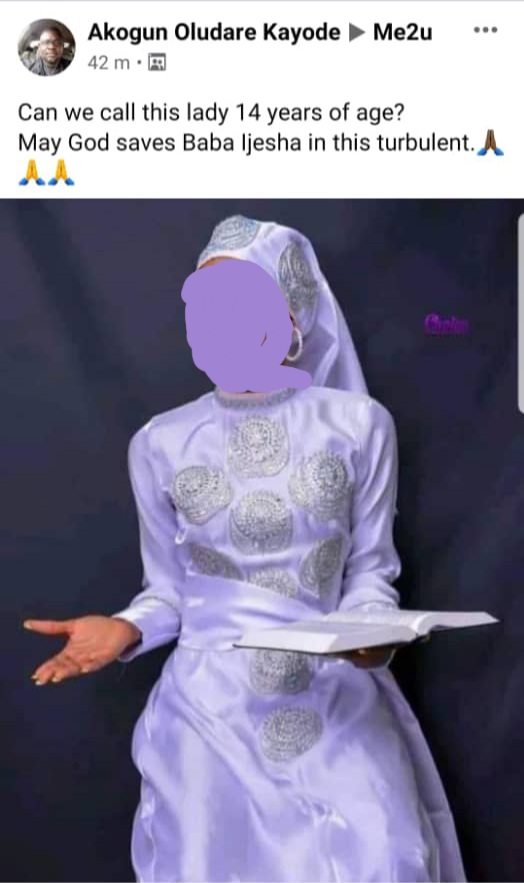 If Any Man Can Post This Picture On Their Social Media Platform In Trying to justify Baba Ijesha's Pedophilia, It Means That The Man Is A Pedophile. PERIOD!

A lady-friend of mine sent me a whatsapp message this afternoon, asking if I would do a write up on the baba Ijesha child molestation saga, the coincidence was unbelievable as I had literally just ended a chat about the same issue with a classmate friend of mine that I have known for 45 years, who wanted to know my views on the issue. Below are the excerpts of our conversation:

Me – I tell you…., I was just having a conversation with a friend about it. I will forward an excerpt to you, now.

[5/2, 2:28 PM] Ayo: There’s a lot going on the positive for Princess in the social space on the prosecution of Baba Ijesha. I would however bring a new dimension to the scenarios.

1. Why expose a minor to abuse and molestation?

2. Knowing a man had raped your child at 7yrs old, you ought to know that keeping your child near such a man is gross neglect of a minor.

3. Baba Ijesha had no mens rea, and his actus reus was catalysed automatically by baiting. Who baits a stray dog with fried chicken and blame the dog?

4. Was Baba Ijesha capable of making reasonable decisions as far as being left alone with a girl-child?

5. Is Baba Ijesha of a reasonable mindset to think right when his sense of reason is lost? Or unstable?

6. Why lock up a child with a known defiler? Its like tying a dog to the rail line when a moving train is on the way, the brake failure of the train is tantamount to the brain failure of Baba Ijesha.

This is for all of us to reason this through. – Name? Confidential.
https://laws.lawnigeria.com/2018/03/01/child-rights-law/

[5/2, 2:40 PM] My Response: Wrong, wrong, wrong! He was set up because he thought he had gone away with it. It doesn’t matter. There are so many 10 to 14 year old that look like grown women, fully developed physically, but are children. Does that change anything? Does it make it right? It’s so wrong on all fronts. He can mess the girl’s life up. Many of our women in Nigeria are messed up because of one abuse or the other when they were young. What about those house girls. It’s much more than being reported ore.

My Lady-friend’s Response: I could tell she was very upset, and understandably so;

[5/2, 2:54 PM] Lady-friend: Sadly these people are very ignorant and sadly it’s coming from the male folks displaying their ignorance because the African culture has always protected the male gender and offer the female to be slaughtered. It’s sad. African men need a lot of education and orientation. 8 out of every 10 naija female have been sexually harassed, or assaulted, or molested. Maybe even 9 sef.

I am a victim, my sister is as well. Different encounters and perpetrators. I have heard uncountable stories from fellow females like me as well. We did not mention our assaults to my mum, interestingly, it was not as a joint decision but because we felt we will not be believed or they will say they ‘are playing’ with us. Those stupid traders in Yaba feel it’s their birth right to touch your backside in the name of soliciting your patronage as you pass their shops. No one, not even their association has condemned this behavior.

Princess did what any sane woman will do in the African society that is so decayed and deluded about these sexual assaults. What was the outcome of the COZA yahoo pastor’s case? Nothing because he has money and police said no evidence.

The only way to obtain justice is to do what princess did. If Princess had reported with no evidence, no one in that insane country would have believed her. They will give stupid excuse that their is no evidence. Naija police is lazy and clueless. Justice? crap.

In a developed world, Princess would not have had to do what she did because the system will investigate thoroughly and get baba Ijesha jailed and placed on the sex register as a pedophile. Princess only got to know that baba Ijesha sexually assaulted the underaged girl recently and she planted the camera to see if the girl’s allegation was true. If the camera  did not catch baba Ijesha, he would have denied it and there would have been no justice for that girl.

Most Nigerian men are despicable and shameless. They have refused to have self control and that is why they are supporting baba Ijesha, because most have done it, or still doing the same. They see a woman as a sexual object. Princess did the right thing in a debased society which is to have evidence and get justice. A lot of Nigerians even in the so called western countries are not informed.

The police set people up in “murder to hire” cases to obtain evidence and jail perpetrators. Princess knew when to step in to prevent the man from proceeding to further have penetrative sex with the girl. I support what she did and would have done the same in a stupid country like Nigeria. She is a mother and I am proud of her. She sure has guts which many of these stupid men don’t actually have.

My Take – This criminal behavior is of epidemic proportion in our country, I am sorry to say. The young female hawkers are molested everyday by these pedophiles and some men in uniform, I mean law enforcement officers, drivers, even white and blue collar workers. Secondary school teachers with their students, female house-helps, and the list goes on. It is a very, very serious issue that a serious government would want to eradicate or reduce to the barest minimum. This issue happens in our country every minute of everyday. Then Nigerian men will be the first ones to cry fowl when women bring their lovers’ children home to their husbands. Some of the root causes of these is highly likely down to long term sexual assault and abuse. These abuses adversely affect these women and damaged them emotionally one way or the other for life, and so one of the effects of their years of abuse is that they are not able to trust men, or feel real love. The psychological effect of their traumatic experiences are usually lifelong, helped to manage and sometime overcome through therapy and treatments.

Unfortunately in a male chauvinistic society like ours in Nigeria where members of the legislature are proponents of child marriage, the huddle to achieve fairness and justice for women victims or to legislate long prison terms, placing offenders on child sex offender register, and other measures that will significantly reduce the crime is very high, if not impossible.

There is nothing to discourage or scare perpetrators of pedophilia to stop their dastardly acts in Nigeria.

We Do Not Have Leaders!

CHIEF OBÁFẸ́MI AWÓLỌ́WỌ̀: A MAN AHEAD OF HIS TIME! UNBELIEVABLE!

Women’s Day: Angel or Bitch, Who is She?

Ibadan Stadium Flooding is an Opportunity in Disguise