BREAKING NEWS
GMT+2 10:39
Home Article RESTRUCTURING: Making A Case For The United Regions of Nigeria. We must Watch Out For The Fifth Columnists. 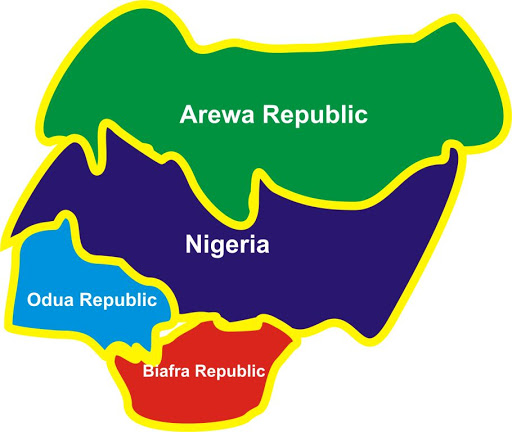 What Nigeria May Look Like After Restructuring, Probably Named The United Regions of Nigeria. There Is No Going Back!!!

RESTRUCTURING: Making A Case For The United Regions of Nigeria. We must Watch Out For The Fifth Columnists.

To say all is well with Nigeria will be like saying that my mother was a virgin. John F. Kennedy, the once U.S President said and I quote, “those who make peaceful revolution impossible will make violent revolution inevitable.” This is directly related to the case of Nigeria as it is today. We have the Fulani Oligarchy led by General Buhari, the commander in chief of the Fulanis, who true to form appointed another Fulani man as the AIG of The Nigerian Police in Usman Alkali Baba as if there were no more qualified candidates from other regions of the country.

The impunity and lack of respect for the voices of reason are becoming very dangerous. Adamu was on a visit to Imo state with the VP Osinbajo by his side. It’s was gathered that VP Osinbajo was not informed or aware of the firing of Adamu, and so the news of his sack was shocking to him to say the least. This is a slap on Osinbajo’s face and the disrespect and disdain for him and his office is highly demeaning and troubling. The sun shall surely set on these terrible days the Nigerian people are enduring sooner, rather than later by the grace of the Almighty GOD.

The Fulani in Buhari has been well documented. His body language, his actions, his inactions, his appointments, his policies and so on, show that he is not the president of Nigeria, but that of the northern Fulanis. Therefore, the agitation for a break up from Nigeria by the Southwest, the Southeast, and recently the middlebelt where all these regions are shortchanged politically, religiously and economically by the behavior of the Fulanis and their henchmen in power is legitimate, and must be taken seriously.

Failure to take these agitations seriously by the Fulani cabal, who have been behaving like King Pharaoh, whose heart was hardened when God, who wouldn’t “LET GOD’S PEOPLE GO,” after which he perished in the red sea with his army.

In Nigeria’s case, there is hope if only the Pharaohs of Nigeria today will harken to the voices of reason and let all sit at the table, to discuss and agree on how Nigerians are going to co-habit in the country, and if they cannot agree, to let every nation go their separate ways.

Also concerned by the raging strife across the land, is Gen. Abdusalami Abubakar (rtd)-led National Peace Committee (NPC) who is convened a meeting in Abuja in March to discuss the way forward.

To help with the solution to how we want to live together as a country, we must go back to the Constitution of the Federation of Nigeria 1960.

Nigeria can go back to the Constitution of the Federation of Nigeria, 1963, which is downloadable from the link above, we can improve on it, and or amend it to suit every ethnic nationality within the Federation. We can rename the country as the UNITED REGIONS OF NIGERIA.

I am extremely skeptical about the quarters where the concerns are coming from; from Lai Mohammed who has been the lying machine and the chief propagandist for Buhari’s government. Also Abdusalami Abubakar, the man who contributed to the many problems confronting Nigeria today when he and his Fulani ethnocentrics without any contributions from the other regions of the country that we know of, drafted and foisted a fraudulent 1999 constitution on Nigeria.

This to me is a ploy to pacify and calm down the polity that is very heated presently. The Yoruba, the Igbos and the Middlebelt leaders and their traditional rulers should not fall for the gimmicks of the 5th columnists in these untrustworthy, deceitful and deceptive characters and their ilk. They must stand firm, that, it’s either the country is RESTRUCTURED, A REFERENDUM, failing which every nation within the so called federation must be allowed to go their separate ways, in peace.

PLEASE HELP SHARE THIS UNTIL IT GETS TO ALL OUR LEADERS AND TRADITIONAL RULERS, AND ALL CONCERNED.

FIXING NIGERIA, BEFORE THE FALL – Afenifere