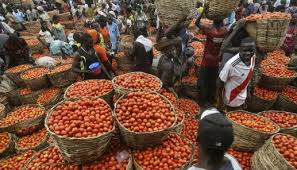 We Didn’t really know how insignificant and vulnerable the Northern economy is until they declared a food supply boycott to Southern Nigeria. Supplies of onions, pepper, tomatoes and cow beef were the only products on offer in the much hyped boycott.

This has been a really bad show for Northern Nigeria.

The Northern advocates of the food supply boycott to Southern Nigeria must be feeling sorry for the revelation of unimportance of their region to the survival and economic progress of the South.

The danger to the Northern farmer henceforward is dire as all the products of the so-called boycott can all be produced better and faster in the South than anywhere in the North. It was only because there were cheaper supplies that Southern farmers succumbed to the laws of specialization of production. Now that the stakes are higher, it takes no more than ninety days to grow tomatoes and onions in most of the South and a year to double the stock of cattle.

The boycott has also proven the truism that the buyer is more important than the seller in any supply chain. Cash is king. Northern farmers and suppliers will recognize that now. The Southern consumer of the vegetables remained well fed and unworried in spite of the boycott, while the northern farmer and supplier lost income, saw tonnes of his products go waste and left most farmers in Northern Nigeria idle.

Supply trucks stayed idle and so did all other employees in the supply chain. The boycott should prove without a doubt to the northern politician that the north is a totally dependent economy on Southern Nigeria. It could not even move or sell its goods to neighboring markets of Benin Republic or the Camerouns.

Economists will have their job of computing the monetary and economic losses to northern Nigeria arising from the self-destructive boycott while the South got the taste of a future wartime economy.

Southern Nigeria is the major population centre and economic hub of West Africa and nothing the North can do to change that in the next hundred years.

Southern Nigeria, without the burden of ideological conflicts and terrorism retains the hope and capacity for self renewal in a self governing milieu. Northern Nigeria on the other hand, mired in violent Islamic ideological conflicts and ethnic rivalries presently suffers a descent to social anomie and, without the patchwork known as Nigeria, faces the real danger of internecine warfare stretching to decades that the world may not have the will or capacity to resolve.

It is the mischief and malicious intent to rope in Southern Nigeria into its self-inflicted troubles that the North keeps flailing around to start a fight with Southern Communities. The food supply boycott is one of those fights. The herders marauding in Southern Nigerian forests and towns is the more wicked example of aggression against the South.

It is now evident that Northern Nigeria cannot stand a shooting war with the South or any section of it. The entire region will go hungry and starve before the shooting starts. You can’t live only on tomatoes and onions.

All it takes to destroy the Northern economy as we now know is to boycott its vegetables and lift the ban on meat imports which has served only to hold the southern economy captive to northern meat products. This import ban on meats started by the same Muhammadu Buhari in 1984 has served to create and sustain a northern cattle monopoly and made Southern Nigeria a catchment market for Northern beef.

A lot of Nigerians do not know that it is far cheaper for the South to import cows on the hoof or tastier beef in refrigerated vans from Lesotho, Brazil or Argentina than to buy cows from Northern Nigeria. Better still, cattle populations can be doubled in the South every two years if the Governments and people put a mind to it.

Northern cattle has brought nothing but trouble for Southern Nigeria in terms of destruction of farms and agricultural investments, kidnapping and killings by cattle herders and worse, poaching of the Southern economy by the North.

The collapse of the Northern economy started with the first misrule of Muhammadu Buhari from 1984, continued with the plunder of the Ibrahim Babangida years, freefall reinforced under Sanni Abacha and now the North under another misrule by Buhari has become a mad mans hell of mindless violence, mayhem and dissonance without the will or capacity of the people for self correction or renewal.

We await the judgement of time.

Atiku deletes Facebook, Twitter posts on Deborah’s killing after threats of losing votes & then denies knowledge of it

Nigeria to ban money rituals and smoking in Nollywood movies