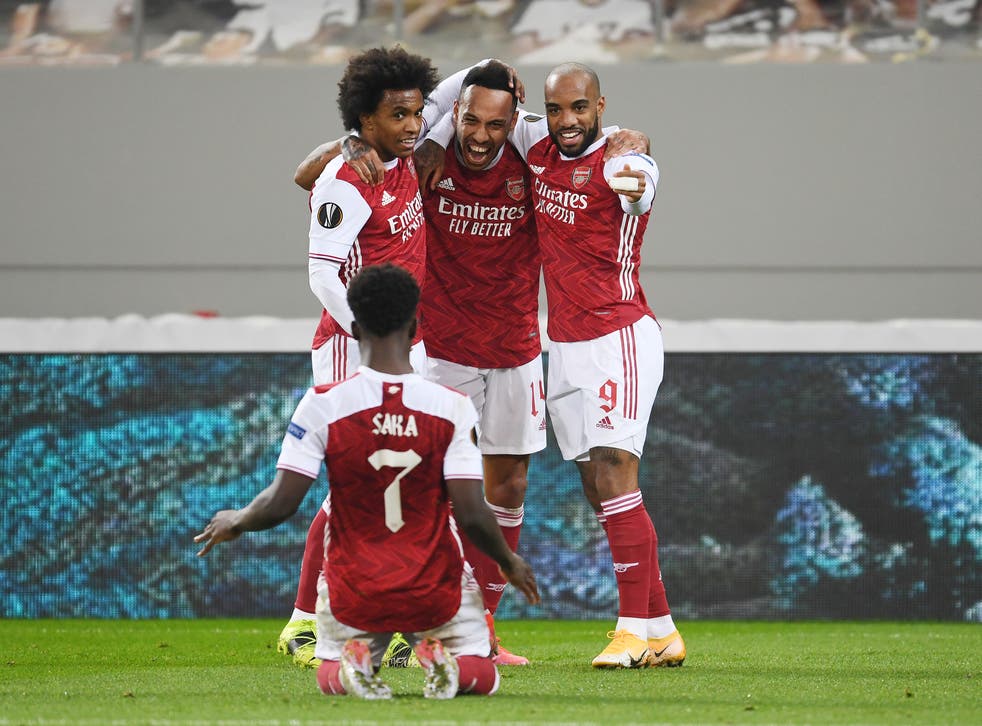 With time running out, Arsenal’s Europa League hopes appeared to be in tatters as they headed towards an away-goals exit for the second season running.

And the prospect of another failure had left Twitter in a frenzy with #ArtetaOut trending.

But in a game described as a “cup final” by boss Mikel Arteta, up popped Pierre-Emerick Aubameyang to head in a winner against Benfica and keep their season very much alive.

And the Gabon striker, whose glaring miss cost his team a place in the last 16 almost a year ago, says this was an experience his side can draw strength from for the future

“Definitely, I had this in my head, but this is what gives me power every day, to take the error from the past and transform it to strength,” Aubameyang, 31, said.

“The team showed character, a lot of character and I think we deserved the win. What we showed tonight, I think it’s going to be an example for the future.”

‘This is the beautiful thing about football’

With the Gunners languishing in 11th in the Premier League and out of both domestic cup competitions, defeat to Benfica would have inevitably raised question marks over their progress under Arteta.

The form of their captain and leading light in attack – Aubameyang – would also have been under scrutiny in what has been a challenging campaign.

Instead Arteta was able to simply express his complete “trust” in the striker, who has now scored 13 goals in 26 appearances this term.

“The last few days after the game in Rome against them, where he missed three or four opportunities and normally they are three goals for him,” said the Spaniard.

“He needed to react and it was great to see the way he reacted is being upset and trying to be better – and not just feeling sad for yourself in this moment.

“This is the beautiful thing about football, if you keep going you always have the chance to put it right.”

‘The course of history changed in a moment’

Speaking on BT Sport former Arsenal defender Martin Keown praised his old club’s character but also warned that they cannot continue making the sort of mistakes that contributed to all three of Benfica’s goals over the two legs.

“They made it so difficult for themselves but they got through it,” Keown said.

“You were looking at the future and thinking what was going to happen to the manager and the players. They were facing real trouble. The course of history changed in a moment there. They have to keep this momentum going.

“There would have been questions ‘is Arteta the right man for the future? I think he is but they have to support him in he summer. Imagine if they had gone out, it would have been very tricky for him.”

Fellow pundit and former England and Chelsea winger Karen Carney, added: “They fought for the rest of their season. This was their final. They are showing character, fight and desire and have a half a chance.”